10 New Books We Recommend This Week 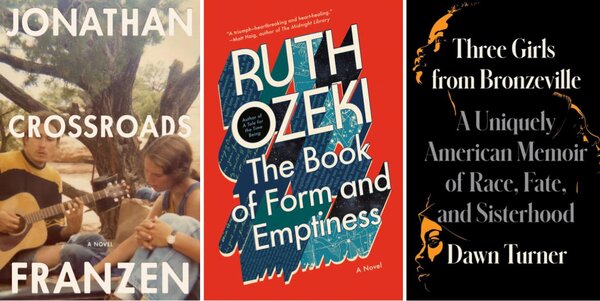 Family relationships loom large in this week’s recommended fiction, especially the father-son variety. Joshua Ferris’s new novel, “A Calling for Charlie Barnes,” features a narrator coming to terms with his father’s turbulent, tumbleweed life. Richard Powers’s latest revolves around the bond between a widower and his bereft 9-year-old son. In “The Book of Form and Emptiness,” by Ruth Ozeki, a teenager mourns for his jazz musician father, and in “Ivory Shoals,” by John Brandon, a boy sets out across the swamps of post-Civil War Florida to find the father he’s never known. Meanwhile, fathers both earthly and heavenly are at the core of Jonathan Franzen’s new novel, “Crossroads,” about a Midwestern pastor and his family, while Liane Moriarty returns to the subject of families and their secrets in her latest, “Apples Never Fall.” Finally, it’s nothing to do with fathers or sons, but you should absolutely make time to read Percival Everett’s novel “The Trees,” a whip-smart, deadly serious comedy about lynching and police violence.

In this week’s nonfiction, we recommend a biography of Norma McCorvey — a.k.a. Jane Roe, the plaintiff in Roe v. Wade — along with an expansive study of xenophobia and a journalist’s memoir of growing up in the Bronzeville neighborhood of Chicago, where life offered starkly different paths to the author, her sister and a childhood friend.

CROSSROADS, by Jonathan Franzen. (Farrar, Straus & Giroux, $30.) At the center of Franzen’s new novel, the first in a planned trilogy, are the Hildebrandts, another of the author’s seemingly solid Midwestern families with eggshell foundations. Set in suburban Chicago in the 1970s, the book follows the family patriarch, Russ Hildebrandt, an idealistic associate pastor at his church; his wife, Marion; and three of their children, Clem, Becky and Perry, as they each suffer crises of faith and of morality. Our critic Dwight Garner calls it “a mellow, marzipan-hued ’70s-era heartbreaker. ‘Crossroads’ is warmer than anything he’s yet written, wider in its human sympathies, weightier of image and intellect. If I missed some of the acid of his earlier novels, well, this one has powerful compensations.”

A CALLING FOR CHARLIE BARNES, by Joshua Ferris. (Little, Brown, $28.) Ferris’s new novel is meta-narrated by Jake Barnes, a novelist who turns his father Charlie’s life into a hall of mirrors for reasons that emerge over time. Ferris has said that Charlie Barnes is modeled on his own father, who died in 2014. The book zigzags artfully through time, gradually amplifying and modifying each phase of Charlie’s life, in ways that keep it constantly surprising. This is a more tender novel than Ferris’s others, but it is also funny from start to finish. Our reviewer Janet Maslin says this is Ferris’s “most dazzling” book, and that he has “risen to the top of his game.”

BEWILDERMENT, by Richard Powers. (Norton, $27.95.) Powers’s ability to translate arcane science into lush storytelling is on ingenious display in his latest novel, about a newly widowed astrobiologist and his troubled 9-year-old son, who embarks on an experimental neurofeedback therapy with profound implications for the human race. “In ‘Bewilderment,’ possibility is synonymous with the vast wilderness of childhood, with the child mind’s innate world-building capacity, and with the child self’s inherent multiplicity,” Tracy K. Smith writes in her review. “Powers’s insightful, often poetic prose draws us at once more deeply toward the infinitude of the imagination and more vigorously toward the urgencies of the real and familiar stakes rattling our persons and our planet.”