5 Y.A. Graphic Novels to Dive Into This Summer

A high school romance, a flashback to the ’90s and other Y.A. graphic novels to read this season. 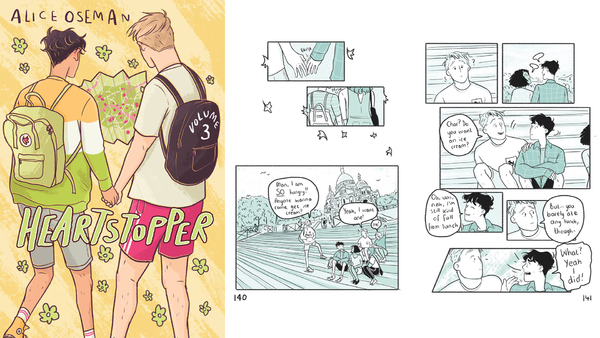 In “Heartstopper: Vol. 3,” Oseman returns to the love story of Charlie and Nick, two students trying to get through high school in Britain, and takes their romance to the next level. After two books in which Charlie and Nick sorted out their feelings for each other, they’re now officially dating. The question is: Who to tell? While he’s happy with Nick, Charlie isn’t sure if he’s ready for the whole school to know they’re together — he’s stressed with exams and doesn’t want to deal with everyone talking about them. He’s also still reeling after being outed and bullied in the past. But not being out as a couple is putting a strain on their relationship. When their school hosts a trip to Paris, Charlie and Nick find the perfect setting to figure out how to be together.

‘Incredible Doom,’ by Matthew Bogart and Jesse Holden (HarperAlley, May 11)

“Incredible Doom” is for anyone who wants to flash back to the past. The book follows a group of ’90s outcasts: Allison, who is trying to escape her abusive father, a magician who forces her to be his stage assistant; Sam, the guy Allison meets online through an early version of the internet; Richard, a “Star Trek” fan who is new in town and is bullied at school; and Tina, the girl who stands up to Richard’s tormentors. They’re all isolated in their own way, until life and computers bring them together. What follows is a series of adventures featuring kids who are trying to discover themselves and protect one another at the dawn of the internet age.

‘The Girl From the Sea,’ by Molly Knox Ostertag (Graphix, June 1)

A queer love story with a magical twist, “The Girl From the Sea” follows Morgan, a closeted 15-year-old tired of her life on the small island that she calls home. One day, Morgan almost drowns — but she’s saved by a mysterious girl named Keltie, who comes from the sea. Thinking that she’s hallucinating, Morgan kisses Keltie, only to find out that her kiss has given Keltie, who is a selkie (a mythical creature in the shape of a seal that can transform into a human), the opportunity to stay human if Morgan accepts her love. Morgan is suddenly faced with a choice: Come out and be with the person who loves her, or protect the identity she has built and lose Keltie. While Morgan is figuring things out, Keltie has a secret of her own.

Even books get a makeover sometimes, and that’s exactly what happened with “Nothing Can Possibly Go Wrong.” The book, originally published in 2013 in black and white, has now been fully colored for this summer reissue. The book follows Charlie and Nate, high school students on opposite sides of the popularity spectrum — Charlie is the captain of the basketball team, who once dated the head of the cheerleading squad, while Nate is the president of the robotics team. In an effort to maintain school funding for their clubs, the cheerleaders and the robotics team combine forces in a local competition, resulting in a story of unlikely friendships.

‘In the Shadow of the Fallen Towers: The Seconds, Minutes, Hours, Days, Weeks, Months, and Years after the 9/11 Attacks,’ by Don Brown (Etch/HMH Books for Young Readers, Aug. 10)

A month before the 20th anniversary of 9/11 comes “In the Shadow of the Fallen Towers,” Don Brown’s account of the terrorist attacks and their aftermath. Brown details the events of that day, incorporating the accounts of responders — including a journalist who was filming when the first plane hit the North Tower, a firefighter who helped in the rescue efforts, a Secret Service member in the sky on Air Force One with President George W. Bush and more. From there, Brown walks young readers through the domestic and international repercussions of the attacks, like Guantánamo Bay, the war in Afghanistan and the rise in hate crimes against Muslim Americans. With striking illustrations and immersive storytelling, this is a helpful primer for young readers who want to learn about the significance of 9/11.