A Rage-Fueled Memoir of a Marriage-Ending Affair

BLOW YOUR HOUSE DOWN
A Story of Family, Feminism and Treason
By Gina Frangello

Pity the poor memoirist. The urge to excavate memory does not tend to come from a place of contentment. Add to this that readers may approach the genre with skepticism or a whiff of schadenfreude. I can’t tell you how many times I have been told some version of “I don’t know how you do it. You must feel so exposed,” as if there is a subcategory of writer who is too damaged or deranged to be aware that she’s performed a public striptease. To be clear, memoir — good memoir — is not a public striptease. But it is in criticism of memoir that the greatest disservice to the art form (and it is an art form) is done. All too often, it’s the life that is judged and reviewed, not the literary merits of the work.

Gina Frangello seems to know this and in “Blow Your House Down,” her uneven, provocative book, tries to inoculate herself against such a response. I’m not sure I’ve ever read, much less reviewed, a memoir that has gotten under my skin the way this one has. Just ask my editor. I tried to wriggle out of this review, because I found myself judging Frangello harshly, scribbling notes like OMG and stop and no!! in the margins. To be sure, Frangello has had a rough life: a childhood marked by violence and poverty, an adulthood spent trying alternately to repair or outrun that childhood. She faces physical pain, suffers the loss of her best friend, is caretaker to her elderly parents and, toward the end of the book, faces a cancer diagnosis herself. The last thing I felt like doing was piling on to her mountain of woes. But that’s me falling into that same critical trap. After all, as Vivian Gornick once wrote, “What happened to the writer is not what matters; what matters is the large sense that the writer is able to make of what happened.”

Ostensibly the story of a destructive love affair that upends her marriage, her family and her life, “Blow Your House Down” posits itself as a feminist manifesto, and its author veers between the two poles that are the greatest no-no’s in writing about the self: revenge and justification bordering on self-congratulation. She does this in increasingly dizzying recursive loops, arriving again and again at the same descriptions, questions and conclusions, without ever deepening her inquiry. She begins by placing herself and her story into a sociological context, hoping, one can only assume, to enlarge it by association: “You may have noticed that anger is making a comeback for women,” she writes early on. “It might be fair to say that this is the moment I’ve been waiting for since the sixth grade.” Problem is, in middle age, Frangello feels she may have missed the boat. “I am too old … beaten to the punch. As women are finally rising up en masse to denounce their widespread treatment by men, I am left naked, with no pristine red robe of Victimhood. Rather, I have cheated, I have lied, I have done damage. I have been selfish and ruled by my desires … in other words, I have conducted myself like a man, despite being a mother, and hence have perhaps forfeited my claim on female rage.” 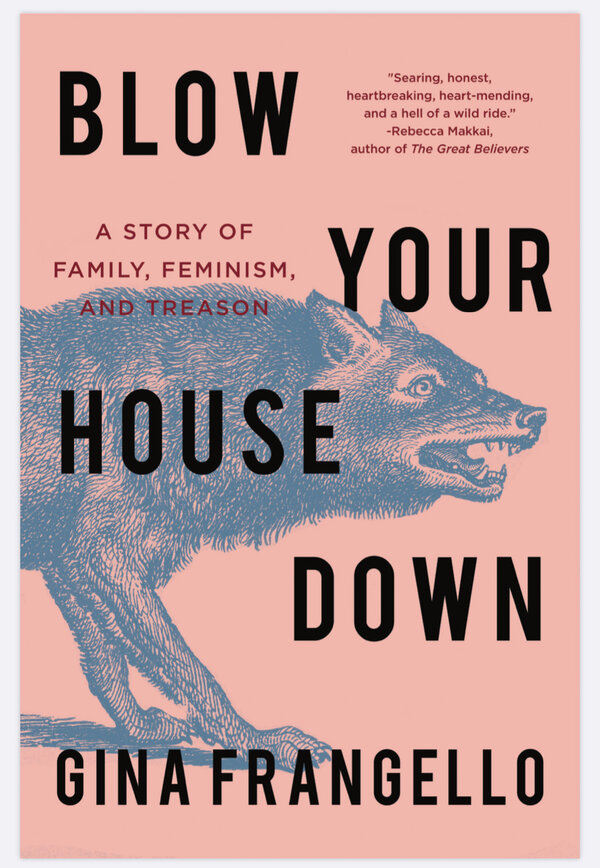 [ Read an excerpt from “Blow Your House Down.” ]

Except that “Blow Your House Down” fairly drips with rage. With the exception of her children, no one escapes the force of Frangello’s fury, which has the effect of rendering her unreliable. She torques the people in her life into cleverish caricatures. The man with whom she’s going to embark on an affair is her “Not Yet Lover.” A cousin’s wife who commits suicide is not spared, referred to as “a beautiful train wreck of a woman, a former model (or so her saying goes) of my age.” Why the parenthetical “or so her saying goes”? What does that add to the narrative? It’s a potshot aimed at a dead woman.

The literary trouble with rage on the page is that it leaks into everything. Rage is incoherent — although observed rage, or revenge, or even self-congratulation, can be coherent. Near the end of a chapter describing her best childhood friend, Angie, from the old neighborhood, Frangello, who has left Angie behind for college and her eventual escape into a marriage with a man “by any definition a good catch,” “not just smart but ambitious, generous,” lists possible outcomes for her friend, among them a stripper, a junkie, a mother of four, a bank teller, a murder victim. The list, written in the second person of which she is fond, concludes: “It does not matter what Angie becomes. The point is that you left.”

In addition to framing the events of her life within the rubric of feminism, Frangello compares her book to those of iconoclastic literary women through time, ranging from Jean Rhys to Marguerite Duras to Kathy Acker to Mary Gaitskill. (She finds them wanting.) She also chooses to enlist the reader directly: “It was the season I Could Take No More. Maybe you, too, have hit that invisible line in the sand, once or a dozen or a hundred times.” But the reader does not wish to be convinced or coerced. The reader wishes to be moved, to feel that powerful sense of empathy and connection that draws us in rather than keeps us on the outside of the crime scene, gawking.

Near the end of her book, after her cancer diagnosis, Frangello quotes Muriel Rukeyser’s famous line: “What would happen if one woman told the truth of her life? The world would split open.” Which brings me full circle to the difference between blurting out a series of personal truths and shaping a narrative, powered by observed rage and disciplined thought, that just might touch the universal thread. Now that, in the hands of a writer as smart and searching as Frangello, is a book I’d love to read.