Al Young, Poet With a Musical Bent, Is Dead at 81

Al Young, an acclaimed poet and jazz aficionado who merged his two areas of interest in books and in poetry readings that often incorporated a musical element, died on April 17 at a care center in Concord, Calif. He was 81.

The cause was complications of a stroke he had in 2019, his son, Michael, said. Before the stroke he had been a longtime resident of Berkeley, Calif., and before that of Palo Alto.

Mr. Young, who published his first volume of poetry, “Dancing,” in 1969, was California’s poet laureate from 2005 to 2008, years he spent in that state and beyond advocating for poetry and bringing it to audiences of all sorts. But he also wrote novels (the first, “Snakes,” came out in 1970) and books he called musical memoirs, in which he mingled reflections on music, especially jazz and the blues, and personal experiences.

“I came up with jazz and through jazz and under the influence of jazz,” he wrote of his childhood in “Mingus/Mingus: Two Memoirs” (1989), a joint reflection on the bassist and composer Charles Mingus that he wrote with Janet Coleman.

He thought poetry and music were close cousins, though he viewed the relationship differently than some earlier poets had.

“I don’t think of poetry and jazz the same way the Beatniks did,” he told The Contra Costa Times, a California newspaper, in 2006. “They recited their poetry to a musical accompaniment, but I see it as a dialogue.”

The blues were as important to Mr. Young as jazz. “The Blues Don’t Change,” from his 1982 poetry collection of the same title, was an ode to the music that included this passage:

You know how to sting
where I can’t scratch, and you move from frying
pan to skillet the same way you move people
to go to wiggling their bodies, juggling their
limbs, loosening that goose, upping their voices,
opening their pores, rolling their hips and lips.
They can shake their boodies but they can’t shake you.

Mr. Young, though he was a scholar himself, was not the kind of poet whose works must be scrutinized by scholars to discern their meaning, and he was not a fan of that sort of poetic elitism.

“The more your poetry offers an opportunity for professors to teach and explain, the bigger your reputation,” he told The San Luis Obispo Tribune in 2008. “If you write for people directly, they don’t have much use for you.”

He also thought that confessional poetry, in vogue in recent decades, had its limits. 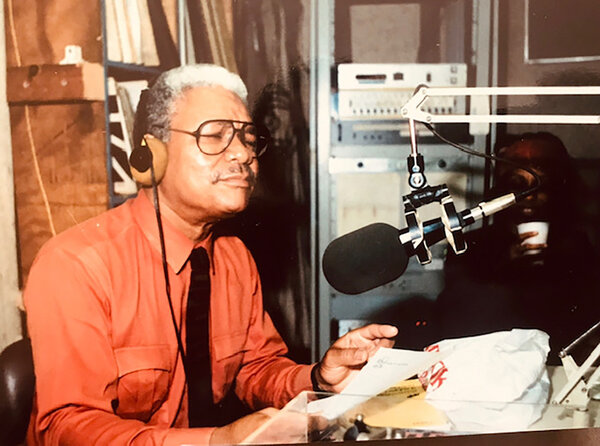 “There is only so much you can say about yourself that will be interesting,” the told Appalachian Today, the online publication of Appalachian State University, in 2017 in advance of an appearance there.

He would urge students and other audiences to write poems that explored the world around them. His own work included personal poems, but one of his favorites to recite involved incarceration and was called “Conjugal Visits.” Another, “The Slots,” published in Willow Springs magazine in 1984, was about the lure of those one-armed bandits and began this way:

The sane you watches
the insane you finally
recover the money you
prayed to get back
to get even & get out
at last. The you who
knows everything registers
this & stands or hovers
helplessly by the you buying
into your own dark dumbness.

Writing a poem, Mr. Young believed, was only part of the process. Reading it live — something he did with a compelling, resonant voice — was the other.

“It’s not complete,” he told The San Francisco Chronicle in 2005, “until someone processes it.”

Albert James Young was born on May 31, 1939, in Ocean Springs, Miss., near Biloxi. His mother, Mary Campbell, was the daughter of sharecroppers. He wrote about her in a poem from his first collection, “The Birthday”:

Michael Young said his father always considered the man his mother married when he was a baby, also named Albert James Young, to be his father. Glimpses of Mr. Young’s childhood turned up in his poetry and nonfiction books. In his introduction to “Something About the Blues,” a 2008 poetry collection that included a CD of Mr. Young’s poetry readings, he wrote of an influential early teacher.

“As early as 1947 — in a second-grade classroom at the Kingston Elementary School for Colored in Laurel, Mississippi — Miz Chapman, my tireless and inspired all-day second-grade teacher, was smuggling down to me the majesty and magic of poetry and the blues,” he wrote. “An unrepentant and dogmatic Afro-Christian, who regarded the blues as devilish, Miz Chapman nevertheless forced us to memorize poems, especially works by colored writers.”

Somewhat later the family moved to Detroit, where, Mr. Young wrote in a 1999 essay for Salon, he developed a crush on a girl a few grades ahead of him: Erma Franklin, sister of Aretha.

“With her pretty brown eyes, her soft hip moves, her smile the River Nile, Erma Franklin put the whammy on me,” he wrote. “She had a grown-up way about her that frightened and thrilled.”

His father had a huge stash of 78 r.p.m. records. In “Drowning in the Sea of Love: Musical Memoirs” (1995), he wrote of sitting around a coal-burning heater listening to them with this brothers.

In 1957 he graduated from Central High School in Detroit, where he had been editor of the school newspaper, and enrolled at the University of Michigan. He left there after three years and settled on the West Coast.

He held a series of jobs, including disc jockey, and made a start on a career as a folk singer, but eventually decided he preferred writing. In 1969 he completed his degree at the University of California, Berkeley, where he majored in English and Spanish. He went on to teach or serve as writer in residence at Berkeley, Stanford University and other institutions.

Though he didn’t often agree politically with Arnold Schwarzenegger, a Republican and California’s governor from 2003 to 2011, it was Mr. Schwarzenegger who selected him as poet laureate. Mr. Young took the job seriously, championing poetry and making a point of doing readings and giving talks in prisons, farming communities and other places where poetry might not have much of a presence.

In 2007 he made “a poet laureate top-to-bottom tour,” as he called it, which started at the California-Oregon border and went all the way down to his state’s southern deserts; he made 40 stops in 11 days, he said, giving readings paired with music.

Mr. Young and Arline June Belch married in 1963. They separated in 1985 but remained married until her death in 2016. In addition to their son, Mr. Young is survived by two sisters, Michelle and Avida.

One of Mr. Young’s poems, “Who I Am in Twilight,” is included in the Addison Street Poetry Walk in Berkeley, a sidewalk with 128 poems embedded in it. It ends: “like Yosemite National Park, like beans &/cornbread, like rest & recreation, like love/and like, I know we last. I know our bleeding stops.”