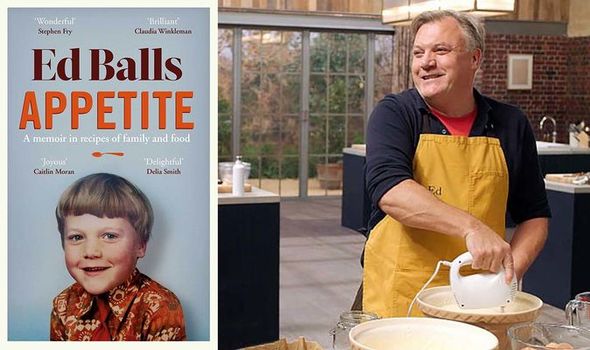 Since losing his parliamentary seat in 2015, the former Labour shadow chancellor has been perfecting his culinary skills. He won Celebrity Best Home Cook this year and has now written an entertaining memoir ‑ a mix of childhood memories, political reminiscences and favourite recipes.

Dedicated to his mum, who taught him how to cook when he was 11, and his dad, who taught him to love eating, the book was inspired by his eldest daughter who requested a collection of his recipes when she headed to university.

Roast beef is one of his signature dishes. He cooks it every Sunday for his MP wife Yvette Cooper and their three children, served it to his campaign team the night before his political career ended, and prepared it for Little Mix’s Jade Thirlwall and Leigh-Anne Pinnock after they scaled Mount Kilimanjaro together for Comic Relief.

Balls believes that the ritual of eating together is crucial for “our collective sanity and wellbeing”.

He has vivid memories of tucking into his grandma’s shepherd’s pie (these days, he adds Lea & Perrins Worcestershire Sauce for “extra tang”) or eating tinned fruit with evaporated milk.

The most entertaining part of the book covers his Westminster years, including the 1993 lunch when Peter Mandelson asked him to quit journalism and work as Gordon Brown’s adviser.

The tomato soup, French bread and green salad served by Mandelson were exquisite but Balls assumed they were the starter, not the whole meal.

“If I was hosting someone, I’d have wanted to leave them turning down a third helping of dessert,” he writes.

Whatever your political persuasion, this is a delicious treat of a book.

Balls is immensely likeable ‑ and so is his cooking. Recipes such as his mum’s lasagne, and apple and blackberry crumble aren’t fancy or fiddly but they’re a glorious celebration of family food at its finest.