At 5, She Protested Homosexuality. Now She Protests the Church That Made Her Do It.

In 1991, a breakaway church in Topeka, Kan., began picketing at a nearby park popular with gay men. Holding handmade signs that read “Gays Are Worthy of Death (ROM. 1:32),” members of the Westboro Baptist Church began what would become a vicious, decades-long campaign against homosexuals, Jews, Muslims and other perceived sinners.

Among the picketers was 5-year-old Megan Phelps-Roper, holding a sign she could not read. Years later, she would become one of Westboro’s most adamant defenders, but on that day she was simply the granddaughter of Fred Phelps, the church’s founder, pastor and fire-and-brimstone provocateur. He and his followers believed God had handpicked them for the “eternal conflict between the righteous and the wicked.” It was their obligation — and their key to heaven — to rebuke outsiders for betraying God’s word.

The church had fewer than 100 congregants, most of whom were Fred Phelps’s family members. But as their targets multiplied and their pickets became more blistering, so too did the local and even global reaction. Westboro members celebrated AIDS, famine, the Sept. 11 attacks and other tragedies. They picketed at American soldiers’ funerals, thanking God for killing those who’d fought for a country that “institutionalized sin.” They prayed God would kill Westboro’s enemies.

And yet Phelps-Roper grew up loving her grandfather’s church. Expanding on the story she told to The New Yorker in 2015, her memoir, “Unfollow,” shows how seductive Westboro and its members were. She vividly portrays the comfort and sense of purpose she felt when surrounded by her tightknit extended family, a sanctuary where every expectation was clear and every problem had a pat solution. She also explains why she left. Throughout, she paints a nuanced portrait of the lure and pain of zealotry, though she leaves many questions unanswered. 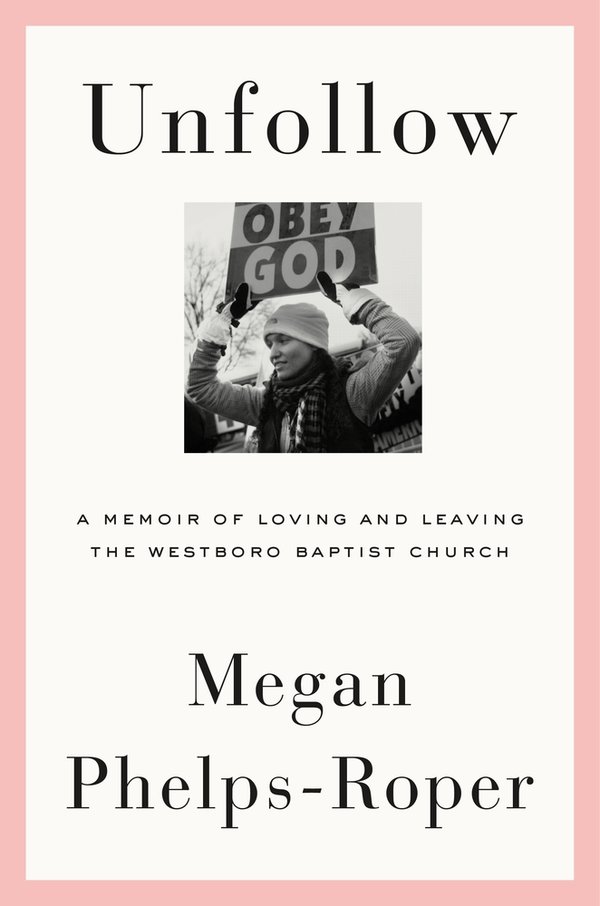 Megan was an obedient child, steeped in church doctrine. Her mother, Shirley Phelps-Roper, was one of Phelps’s 13 children and served as the church’s picket organizer and spokesperson. Both Fred and Shirley were loving but had violent tempers, and Megan worked hard to win their and God’s approval. She was an enthusiastic believer and enjoyed the triumph of hurling invectives and Scripture at the ignorant masses. Her book reflects its author’s upbringing, and often cites biblical passages to explain why Westboro’s members were so persuadable. But for readers who aren’t as familiar with the Testaments, the scriptural passages may be overwhelming.

By 13, Megan was happily sparring with opponents in the chat room of the church’s website, GodHatesFags.com. (“You think the internet was created by God for these pornographers?” her grandfather says, referring to general pop culture. “The heck you say. He created it for us. For our preaching.”) She became the church’s official voice on Twitter, where she expanded Westboro’s reach by targeting influential users and baiting followers with her hateful posts. She dismissed their raging responses as ignorant or close-minded, exactly what they thought of her.

But a few opponents took a different tack. Though they disapproved of Westboro, they approached her with curiosity and humor instead of scorn, lowering her defensiveness. The first to prod her conscience was an Orthodox Jew from Jerusalem who pointed out inaccuracies in her Old Testament translations and encouraged her to learn Hebrew to see for herself. When he noted the hypocrisy of Westboro’s calling for the death penalty for gay people — “Didn’t your mom have your oldest brother out of wedlock? … That’s another sin that deserves the death penalty, isn’t it?” — Megan cut off contact; he was fraying her beliefs.

She also tried to bury her unease about Westboro’s apparent violation of “love thy neighbor,” and was unsettled by the duplicity of the elders who took over as Phelps aged, as when they created a fake “Int’l News Service” claiming they’d picketed Westminster Abbey (though they were in Topeka), including Photoshopped images. Twitter pounced on the lies.

“If the church was wrong about all those things, what else were we wrong about?” Phelps-Roper reflects. “The question felt like an iron key sliding into the lock of a long-sealed door. I could almost hear it swinging open on hinges groaning with age, unleashing a surge of memories buried inside — as if they had been deliberately locked away so as to cause no disturbance.”

As her faith continues to unravel, she thinks, “If we were wrong, then I had spent every day of my life industriously sowing doom, discord and rage to so many — not at the behest of God, but of my grandfather.” She remembers Fred’s mantra: “There’s something wonderfully liberating in the notion that you’re 100 percent right.”

She knew leaving the church would mean losing everyone she’d ever loved. Just as they’d done to her brother after he defected, the family would block her from their lives. They’d referred to him with disgust, casting him as “a selfish jerk who wanted only to pursue his own lusts.” If the church was right, abandoning it would doom her to eternal punishment. Besides, how could she survive without the security of Westboro, where everything was black and white and every decision made for her? Outside there was only gray, and innumerable people who had every right to despise her.

In November 2012, at age 26, Megan and her sister Grace finally left Westboro, fleeing to South Dakota to hide from the world as they found a new equilibrium.

The next month, the Sandy Hook massacre occurred. Westboro announced it would protest the memorials with signs saying, “Pray for More Dead Kids.” “My relief at not participating was tempered by my distress at the number of times I had done exactly the same,” Megan writes, sickened that false righteousness had driven her to devote herself to such cruelty. She knew her public silence would be interpreted as a tacit endorsement of Westboro’s message, so she tweeted an apology, explaining she’d left the church. Responses of encouragement and forgiveness poured in, even from those she’d once ruthlessly condemned. She was stunned.

Unfortunately, the book dodges the overarching question of whether Westboro is an aberration or an extension of the dogmatism of many religious adherents who lack tolerance for theological diversity. As someone so deeply enmeshed in religion, the author is in a unique position to ponder the overlap between extremist and mainstream religiosity, or the ways many mainstream evangelicals have driven the culture wars in the name of their God. She’s also oddly silent on her take on religion now — on whether or not she still considers herself a Christian, whether she believes in God at all.

But Phelps-Roper does note the current, seemingly uncrossable national divide, each side sure of its Truth and unwilling to hear the other’s. “In the era of Donald Trump,” she writes, “the echoes of Westboro are undeniable: the division of the world into Us and Them; the vilification of compromise; the knee-jerk expulsion of insiders who violate group orthodoxy; and the demonization of outsiders and the inability to substantively engage with their ideas, because we simply cannot step outside of our own.” Underneath it all, in her words, is “a sentiment that Westboro members would readily recognize: We have nothing to learn from these people.”

She urges all of us to reach out in good faith to those we disagree with, to try to understand the experiences and motives that have shaped their stances, and to realize that grievous behavior isn’t necessarily driven by ill intent.

Ruth Padawer is a contributing writer at The Times Magazine and an adjunct professor at Columbia University’s Graduate School of Journalism.