Life lessons learned from a not so humble cuppa: Author Noriko Morishita draws parallels between the art of Japanese tea making and life

THE WISDOM OF TEA

You may think you’re particular about how you make your tea — warm the pot? Milk in first? Teabag in a mug? Whatever your brew, it’s nothing to the Japanese tea ceremony.

As this delightfully quirky little book, which is part memoir, part cultural history, demonstrates, the tea-serving procedure, known as otemae, is like an intricately choreographed dance with endless idiosyncratic rules.

You must enter the room on your left foot and cross each tatami mat in exactly six steps without stepping on the borders. When stirring the tea, the bubbles should almost dissolve, leaving behind only the shape of a crescent moon.

If this sounds complicated, it’s because it is. ‘They say God is in the details,’ author Noriko says, and the ceremony seems one big obsession over endless tiny details. 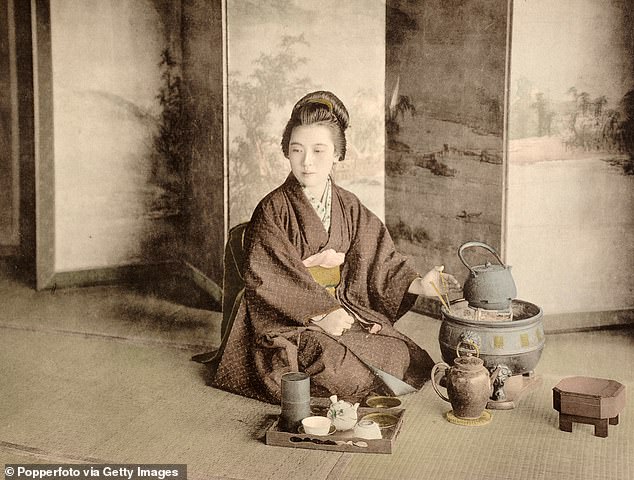 Author Noriko Morishita divulges the wisdom of tea — savour the now. Pictured: The Chanoyu or tea ceremony, performed by a young Japanese lady, circa 1890

Noriko started taking lessons when she was at university. It was considered ‘outdated and desperately uncool’, but it was an opportunity to spend time with her cousin who also wanted to learn. Feeling a little lost, Noriko thought ‘it would be better to start something — anything — in earnest, rather than staying frustrated about not finding what I wanted’.

Initially, Noriko found it impossibly counter-intuitive. Slurping your drink is considered polite. Unlike at school, questions are discouraged (‘It doesn’t matter why. This is just what we do’) and note-taking is not allowed. (‘You mustn’t think with your head!’)

Just as she thought she was getting the hang of it, the routine would shift. ‘When the seasons changed, the layout of the whole room would be drastically altered.’ This takes on a whole new complexity when you realise the Japanese year is divided into not four but 24 seasons.

But incrementally Noriko began to understand: ‘You haven’t the faintest clue what you are doing at first. Then, one day, out of the blue, your horizons broaden. Just like in life.’ 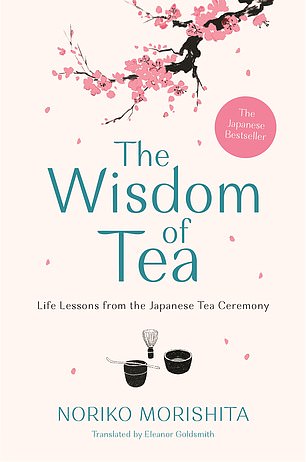 She began to notice the little things: tea utensils ‘might look old-fashioned but have an amusing name; or appear nothing special but turn out to be elaborately decorated in one tiny corner.’ They were ‘incredibly stylish, even witty’.

The ceremony’s rules were originally codified by Sen no Rikyu, Tea Master to the warlord Hideyoshi, when it was considered an essential accomplishment for any high-ranking warrior.

Samurais would set their weapons down before entering the tea room: they had to come in peace. Tea was an opportunity to forget life’s pressures, if just for an hour: ‘Freed from his onerous role in a cut-throat world, a samurai could return to being an ordinary person.’

Rikyu was eventually forced to take his own life, after angering Hideyoshi. In the merciless world of 16th-century Japan, as Noriko remarks, sharing the tea ceremony with someone was ‘all too often, a once-in-a-lifetime experience’. It might be the last time you met.

But, as Noriko observes, ‘Life’s events are always sudden, no matter when they come.’ She learned this when her father died unexpectedly and it highlighted to her the importance of living in the moment: ‘If you love someone you have to tell them so. When the flowers bloom, celebrate. If someone is special to you, you should seize every opportunity to eat with them, live life with them, and enjoy their company.’

This sentiment — savour the now — is fundamental to the ceremony.

You finish this book still with no clue how otemae should be done — even Noriko, who is studying to be a master, says she has only a ‘hazy grasp’ after 25 years — nevertheless this is a book of wisdom and joy.

By studying the rules of making a simple drink, Noriko learned so much more: take your time, live in the moment, appreciate the seasons.

Alternatively, you could save yourself the hassle and stick with English Breakfast.

What Does Johnny Depp's Tattoo Dedicated To Winona Ryder Say?

Chris Evans and Julia Louis-Dreyfus Pay Respect to Late Ruth Bader Ginsburg With Tributes
We and our partners use cookies on this site to improve our service, perform analytics, personalize advertising, measure advertising performance, and remember website preferences.Ok