Behind the Scenes of Choosing the Best Memoirs

The Times’s staff book critics — Dwight Garner, Parul Sehgal and Jennifer Szalai — recently endeavored to choose the best 50 memoirs published in the past 50 years. Below, they talk about the process and the results, including what they look for in the genre, the books they discovered for the first time and more. — John Williams, daily books editor and staff writer

Were you surprised at all (I was) by how quickly — long before you got around to ranking the top 25 — the three of you formed a consensus around 25 or 30 of the books that would make the final list?

DWIGHT GARNER I was a bit surprised. You never know what other people are reading, where their passions are taking them. I feel like we started this discussion, at a table under bright fluorescent lights in the Book Review offices, by delivering our cold critical judgments. The conversation got more interesting, and better, when emotions got involved — when we had to defend the things we loved. Parul and Jen are more fun to argue with than humans have a right to be.

JENNIFER SZALAI I was surprised, too, since I would have guessed that herding critics would be about as easy as herding cats, only noisier. But we did it! And we agreed on a lot early on. And where we didn’t was where it became a bit thrilling, offering us a chance to really look at our own assumptions and to learn from one another.

PARUL SEHGAL There was consensus but also some heated conversations about [redacted] and [redacted]! But our agreement does speak to the unequivocal greatness of these books — especially our top 25, which came together with almost indecent ease. As much as I love arguing (and with Dwight and Jen in particular), my favorite part of the process was each of us introducing the others to memoirs that had long mattered to us — and then trying to parse why.

What did you each individually prize and privilege as you considered the books? Assuming that fine writing is what you look for in books of every stripe, what else do you look for in memoirs in particular?

SZALAI I was looking for an element of surprise, for an unsparing self-awareness, for a willingness to go there, wherever there happens to be. A sense of the absurd was always welcome, but not required. Any revelation that sounded pat or easy was a turnoff. Same went for anything that was trying really, really hard to shock.

GARNER Calvin Trillin once said that American memoirists seem to be competing in what he called an “atrocity arms race.” There aren’t many of those sorts of books on this list. I was looking for memoirs that really crack open a world, that have the intensity of first-rate novels, that make us feel we’ve been brought along on an adventure. You want the whiskey, not the whiskey and water.

SEHGAL Exactly. Memoirs are about those most ancient questions: Who or what made me? And that “me,” who is that exactly? The best ones have a ruthlessness, a willingness to get to the marrow of oneself, without preening and dissembling. I’m with Orwell: “A man who gives a good account of himself is probably lying, since any life when viewed from the inside is simply a series of defeats.”

You all came to this project with favorite memoirs, of course, but you also read a lot of them in order to compile the list. What’s the one book you’re most glad you discovered through this project?

SEHGAL “Travels With Lizbeth” knocked me straight out. For three years in the late 1980s and early 1990s, Lars Eighner lived on the streets, mainly in Austin, Tex., accompanied by his dog, the two of them nearly dying of hunger and exhaustion. It’s not just the dangers or discomforts that so distinguish this book, but the tone — its originality and wry grandiloquence. “I am a scavenger,” Eighner writes. “I think it a sound and honorable niche.” He’s Pickwick, roughing it, or Madame Defarge. When he needs a sweater for the coming winter, he finds a mass of yarn near a sorority house and fashions a circular knitting pin from a television cable and two ballpoint pens: “I liked to imagine I was knitting while the heads of yuppies rolled past my feet.”

GARNER I hadn’t read Maxine Hong Kingston’s memoir (“The Woman Warrior), or Tony Judt’s (“The Memory Chalet”), or David Wojnarowicz’s (“Close to the Knives”). Each is terrific. Wojnarowicz’s will blow your hair back: the sex, the nonlinear intensity, the misanthropic aplomb. It seems to take place, to borrow a line from Sam Shepard about his plays, in “the whacked-out corridors of broken-off America.” It won’t be to everyone’s taste, but those who read it won’t forget it. Kingston’s book is, among many other things, a terrific food memoir. This was the first I’d heard of anyone deep-frying a ghost.

SZALAI When it comes to surfing memoirs, my attitude has generally ranged from indifference to (an admittedly unearned) hostility, so William Finnegan’s “Barbarian Days” was a happy surprise to me. At first I was intrigued by his account of moving to Hawaii and finding himself part of an unpopular minority of white kids at school, but soon enough I became entranced by his lush descriptions of being out in the ocean, where the difference between life and death could rest on a vanishing instant.

We talked a lot while compiling the list about the different things memoirs can do — serve as an almost comprehensive autobiography, cover a certain slice of years in someone’s life, parse a certain obsession. Do you have a favorite kind of memoir, among these templates?

SZALAI I don’t have a preference. If a memoir is great, it’s great. One of my favorite books in any genre is a memoir by a self-involved Frenchman (Emmanuel Carrère) who uses the life stories of two small-town judges to illuminate his own; if that doesn’t sound like an uninviting template, I don’t know what does.

SEHGAL I’ll admit a partiality to books that reflect on the oddness of the exercise — the artifice of memoir, the unreliability of memory, the coercive tidiness of narrative (perhaps this is why I’m drawn to memoirs by critics: Vivian Gornick, Margo Jefferson, Anatole Broyard, Clive James).

Approximately 32,000 rock stars have written memoirs over the past decade. Two of them appear on your list: Keith Richards and Viv Albertine. Can you say a bit about what you like about their books?

GARNER The Keith Richards was a no-brainer. When you open his book, it’s like a cat has jumped into your lap, with its claws out. The voice, the anecdotes, it’s all there. Richards is of course English. But if Huck Finn grew up to be a rocker, he might sound like this.

I’m so pleased to have Viv Albertine’s book on this list. She was in a band with Sid Vicious before he joined the Sex Pistols. Mick Jones of the Clash wrote that band’s biggest hit single, “Train in Vain,” about her. Albertine saw it all, and she can write. 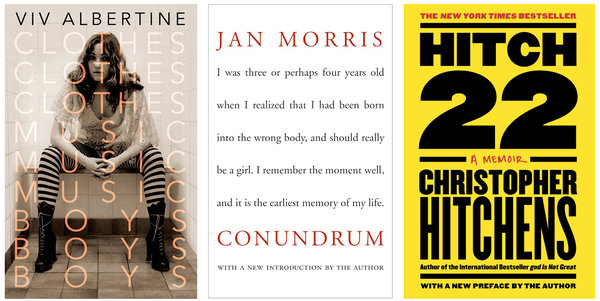 SZALAI Richards shows how it can be done. I’ve never been busted for getting high in the bathroom of an Arkansas diner, but his account is so direct and so vivid (not to mention surprisingly lucid, considering the circumstances) that I now feel like I have.

Albertine is another one. The first time she bought a guitar was also the first time she had even picked one up. Her response is physical and immediate, even a little bit sensuous, but not overblown. I like that.

Perhaps it’s understandable that many memoirs are about hard times — struggle, grief, heartbreak, family troubles. What are some of the more joyful books on this list?

GARNER “Hitch-22,” by Christopher Hitchens, is so witty and so spirited. That book always gives me a high. Among other things, it’s a terrific memoir about friendship. Then there’s “Slow Days, Fast Company,” by Eve Babitz, who seemed to live on a cloud of hedonistic joy when it came to food, sex, drugs, beaches, people, books — everything, really.

SZALAI I don’t know if I could call Barack Obama’s “Dreams From My Father” joyful, but it’s hard not to read even the most painful and lonely parts in the light of what we all know happened to him after he wrote it.

SEHGAL I direct you to “Conundrum,” by Jan Morris. There’s tough stuff here, too — it’s a book about Morris’s transition and covers years of painful gender dysphoria — but no writer, no human on this earth, has such a talent for happiness. Everything is a lark, an adventure for her. She describes the early years of family life as “constant ecstasy.” It’s full of passionate odes to friendship, marriage, womanhood, the nourishment of work.

Memoirs are so often powerful for how they evoke a time and place, the way they vividly recall scenes. Could each of you name an especially indelible scene from among these books that has always stayed with you?

SEHGAL There are scenes of mourning from “Wave” that are tattooed on my brain: In one, Sonali Deraniyagala visits the hotel in Sri Lanka where her children, husband and parents perished in the Asian tsunami and discovers her husband’s research paper that survived, with only a small rip, and later, her son’s little shirt, the sleeve still rolled up on one side. I cannot recall such moments, even now, without weeping.

GARNER All those lunchtime martinis Arthur Schlesinger Jr. consumes in his memoir, “A Life in the 20th Century,” are pretty inspiring. In more earnestness, I’ve never been able to shake the scene in Harry Crews’s “A Childhood” when he falls into that vat of scalding water as a child, and the awful repercussions. Eighner’s lessons in how to Dumpster-dive are pretty unforgettable, too. They’re moving and oddly profound about humans and their waste.

SZALAI Hilary Mantel encountering something in the garden — a ghost? the Devil? a gust of wind? — is described with such intimacy in “Giving Up the Ghost” that I felt a rising sickness while reading it, which I took as a good sign.

Who’s someone who hasn’t written a memoir whose memoir you would like to read?

GARNER Annie Leibovitz, the photographer. Every time she pops up in someone else’s biography or memoir, it’s as if someone has just put a classic album on the turntable. In “Sticky Fingers,” Joe Hagan’s biography of the Rolling Stone magazine founder Jann Wenner, he describes how Leibovitz would, when late for a flight, simply dump her rental car at the front entrance and sprint into the airport. Now I can’t stop dreaming about attempting this.

SZALAI The artist Kara Walker. Her work is revered now, but two decades ago, her silhouette cutouts garnered enormous criticism from some older African-American artists, like Betye Saar, who considered Walker’s use of the most startling and degrading images a form of betrayal, not resistance. I would love to read what Walker makes of that experience, her coming-of-age as an artist and more — and we know she can write, too.

SEHGAL Elaine May, don’t deny me. I even have the perfect title picked out for you: “Improvisations” — from “Improvisations to Music,” her first comedy album with Mike Nichols. Not a dull moment in her life — from attending 50 schools by the time she was 10, meeting Nichols in an undergraduate philosophy class, marrying her psychoanalyst, the glorious successes and one glorious catastrophe (“Ishtar”). And returning to the stage last year, at 86, in “The Waverly Gallery,” with a performance for the ages.