Coming up Rosie
Boris Johnson could soon find himself ensconced in number 10 Downing Street – unless, of course, he manages to shoot himself in the foot again, something that clearly should not be ruled out. A few years ago when still Mayor of London and taking credit for former mayor Ken Livingstone's idea of installing bikes for hire around the streets, he delivered the keynote address at the Melbourne Writers Festival. 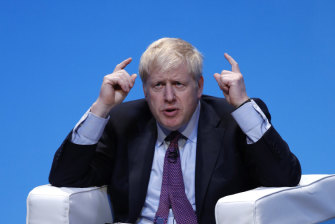 Boris Johnson has romance on his mind.Credit:

Earlier in the day he told me how much he loved writing – he has, after all written fiction (Seventy-Two Virgins), biography (The Churchill Factor), history (Johnson's Life of London; The Dreams of Rome), about cars (Life in the Fast Lane) and politics (Friends, Voters, Countrymen). At that time he still had three years to go as mayor and apparently wasn't sure whether he would carry on in politics. He was particulalry enthusiastic about J.K. Rowling publishing crime fiction under the name Robert Galbraith and getting knockout reviews – "that is really showing them; what an incredible woman she is" – and thought he might fancy writing romance under a pen name.

"I've turned my hand to everything, but romantic fiction I have not yet tried. That could be next; that could be the jackpot. What I hope is that in 10 years you will have completely forgotten this interview and you'll be standing in an airport idly leafing through the glossy embossed volumes with lurid pictures of lonely women on the covers and you will say, 'what the hell, no one will mind' and you will read it furtively – no, you'll get it on your Kindle so you won't be caught reading it."

His aim, he said, was to make a fortune. And his pseudonym? "I think I might adopt the pen name Rosie M. Banks for a series of romantic novels." Whether the headline-making events of his own romantic life derail his political ambitions remains to be seen, but Johnson's future could turn out to be Rosie.

From Finch to Apple
It's a brave person who starts up a publishing company in this climate, especially brave if they want to do things a bit differently. Samantha Miles and Sonya Danaher worked together at Finch Publishing, which, you may recall, closed its doors last year. So they set up Bad Apple Press with the aim of "getting good, enjoyable stories by Australian authors and getting them out to readers", according to Miles. 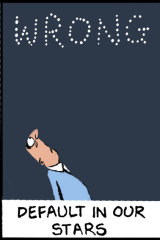 The duo – they are based in Sydney and Perth respectively – will specialise in non-fiction, particularly memoir and biography. But they are working on a firm-sale basis in their dealing with bookshops – the more usual method is sale or return – "but at a significant discount". Danaher says sale and return doesn't really work for small publishers and Miles says had they gone down that route "we might just as well have dug a hole in the garden and buried our money".

Bad Apple titles, which include works by Andrew Fuller, Will Patterson and Mandy Nolan, are available from its website – "the authors get a 25 per cent royalty, which is higher than normal" – online and at shops. Miles and Danaher will deal with their own orders – "cutting out the middleman, the distributor".

Given that both Miles and Danaher worked with Rex Finch – he will as a kind of mentor for them should they need him – they are keen to keep the Finch Memoir Prize going. And remember this year's Stella Prize winner, The Erratics by Vicki Laveau-Harvie, won the Finch prize in 2017. BadApplePress.com.au

The crime factor
Anyone who has had anything to do with writers will know that there can be the odd bit of backstabbing and jealousy. In crime-writing circles, the opposite seems to be the case. There's almost a collegiate feel, with writers happy to give each other a helping hand.

In the early 2000s, when Adrian McKinty was getting cracking, Val McDermid emailed him out of the blue saying she'd been reading him and could she help him at all. "She had no reason to contact some Mick crime writer she'd ever met; who does that?" said the Belfast-born writer. Then Ian Rankin contacted him a couple of years later, saying much the same thing. In the US, where he is now based after 10 years Australia, he had enthusiastic backing from Don Winslow and Daniel Woodruff; his "Belfast lot" of Steve Cavanagh, Stuart Neville and Brian McGilloway have backed him, and in Australia Candice Fox and Michael Robotham. "All these people who for no gain or anything they could ever get back from it have just been so incredibly helpful and kind and nice."

He says it teaches you to be a better person and to help when you can. A case in point: a couple of months ago, he picked up Only Killers and Thieves, a bloody novel set in 19th-century Queensland by Paul Howarth, a Brit who lived in Melbourne for six years. He was impressed by the first page in the airport bookshop and loved the whole thing. He "went on a Twitter flurry", bought copies for friends, even got in touch with Russell Crowe telling him he should get hold of the rights. "I don't know if anything will come about. That's the sort of play it forward, pass it on. It's a much more pleasant environment where you can help other writers."

Lives in print
The shortlist for this year’s $25,000 National Biography Award reveals many things, but above all that Australian life writing is in fine condition.
The six books – five are debuts – are: No Friend But the Mountains: Writing from Manus Prison, Behrouz Boochani; The Wasp and the Orchid: The Remarkable Life of Australian Naturalist Edith Coleman, Danielle Clode; The Trauma Cleaner: One Woman’s Extraordinary Life in Death, Decay & Disaster, Sarah Krasnostein; Do Oysters Get Bored? A Curious Life, Rozanna Lilley; One Hundred Years of Dirt, Rick Morton; and Miss Ex-Yugoslavia, Sofija Stefanovic. Boochani and Krasnostein have already each won the Victorian Prize for Literature, at $100,000 Australia’s richest writing prize. The winner will be announced on August 12.

Soft States sales
The Association of American Publishers has crunched the numbers for last year to show that book publishers had revenue of $25.82 billion last year from sales of 2.71 billion units, apparently as a result of softness in the higher education and professional sectors. That marks a 7.7 per cent fall in revenue from $27.9 billion five years ago. But in the trade sector revenue jumped over the same period from $15.4 billion to $16.2 billion, up 5 per cent.

The Trump effect
Meanwhile American booksellers and publishers face the prospect of tariffs on their dealings with China thanks to the ongoing trade dispute between the Trump administration and the Chinese government and it's fair to say they are worried.

You couldn't put it more bluntly than Jamie Fiocco, the president of the booksellers' association, in her submission to the US International Trade Commission: "Bookselling is a highly volatile business. If prices increase due to an increase in tariffs, the negative impact on the fiscal health of the bookselling world – and on readers young and old – would be significant."

She said 25 per cent of American publishers had their products printed in China. "Any tariff on printed books, regardless of genre or title, would be a tax on every reader."