It’s ABC from MUP to T&H
The ructions at Melbourne University Press earlier this year have had a knock-on effect – a good one – on the local operations of Thames & Hudson. T&H Australia managing director Daniel Watts was always an admirer of the sorts of books that MUP was publishing under Louise Adler, so when the university publisher decided on its controversial change of direction, he swooped on one of the several departing staff, executive publisher Sally Heath. 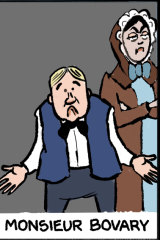 ‘‘It was our good fortune that I met Sally before,’’ he said. That’s because T&H is cranking up its local operations with the introduction of a narrative non-fiction publishing program and Heath is joining as associate publisher to build the new list.

Watts says it’s an area he has wanted to move the publisher into for a while, but admits that had T&H not appointed Heath, ‘‘we couldn’t have proceeded as quickly’’. Heath will initially commission 12 titles a year on top of the 30 T&H already produces locally. Watts sees a niche for the new T&H books between scholarly and consumer writing, with titles covering biography, history, the social sciences, and the art world. ‘‘I am hoping it will plug a little of the gap left by MUP, but we’ll put our Thames & Hudson stamp on it.’’

Next year the company, which has been known primarily for its illustrated books both in its home British market and Australia, celebrates 50 years here. The demand for its sort of books has historically proven to be seasonal and that partly explains the move in both markets into newish areas as some sort of hedge against that. But Watts says the Australian arm is doing fine and has doubled in size in the past five years.

Killing Glastonbury
So how did the crime writers go at Glastonbury? Last Saturday, the Fun Lovin’ Crime Writers – Val McDermid, Mark Billingham, Chris Brookmyre, Stuart Neville, Luca Veste and Doug Johnstone – took to the acoustic stage at one of the world’s most famous music festivals to belt out a few songs by Johnny Cash, Elvis Costello and various others. McDermid, the band’s lead singer, said it was an amazing experience.

‘‘The buzz was extraordinary, the audience really got into it. All the rest of the day when we were wandering round the site, people kept stopping me to compliment our performance. What a blast!’’ As some wag put it, the crime writers put the ‘‘bury’’ in Glastonbury. It was no one-off, though. This weekend they play the Cornbury Music Festival and have gigs looming at Theakston’s Crime Writing Festival in Harrogate and the Edinburgh International festival.

Three of the band – McDermid, Brookmyre and Johnstone – have been longlisted for the McIlvanney Prize for Scottish crime writing. Let’s hope there are no squabbles in the band if one of them wins.

Philby's influence
Acknowledgments at the back of books can turn up some gems. Take this one from the forthcoming spy novel The Most Difficult Thing by Charlotte Philby. If that surname sounds familiar in the context of espionage, that’s not surprising as Charlotte is the granddaughter of Kim Philby, the British double agent and friend of Graham Greene who defected to the Soviet Union in the early ’60s.

Philby the novelist makes a point of thanking her maternal grandparents and then adds the following: ‘‘Not forgetting Grampa Kimsky, whose curious endeavours became the genesis of this novel.’’ The novel, her first, is published later this month by the Borough Press.