Books That Changed Me: Sallie Muirden

Sallie Muirden is the author of three previous novels – Revelations of a Spanish Infanta, We Too Shall Be Mothers, and A Woman of Seville – and a collection of poetry, The Fable of Arachne. Her latest novel, Wedding Puzzle, is published by Transit Lounge.

MALORY TOWERS SERIES
Enid Blyton
I devoured these very English novels when I was nine and 10. They made me want to go to a boarding school like Malory Towers and have as much fun as this group of daring, brazen young girls. I began my writing career at the age 10 by imitating Enid Blyton's style. 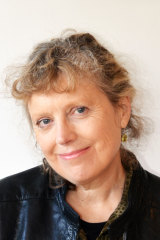 Sallie Muirden says Carson McCullers’ The Member of the Wedding is the perfect novel.Credit:

THE DIARY OF ANAIS NIN: BOOK I, 1931-1934
Anais Nin
I started reading Anais Nin's diaries in 1979. I found them fascinating in a chic, European way. Imagine being great friends with Henry Miller and living in a houseboat in Paris. I got bored with Nin's later diaries but I was inspired to start a diary myself. I learnt so much from Nin's descriptions of people.

THE PASSION
Jeanette Winterson
So much imagination and poetry in a novel that is a postmodern tour de force. I was blown away by the charm of Jeanette Winterson's voice in her inventive remaking of Napoleonic history. Winterson showed a whole generation of writers how to get up close and personal with someone from long ago, like Napoleon.

THE MEMBER OF THE WEDDING
Carson McCullers
While she was writing this coming-of-age novel that is set in a small town in Georgia, the American author claimed that "the least slip" would ruin it. There was to be no slip. It is a perfect novel. The conversations Frankie, who is 12, has in the kitchen with her housekeeper and her little cousin are so remarkable that a Broadway play was made out of them.