Here’s how we reviewed now-famous mysteries by the likes of Agatha Christie, Ngaio Marsh, Dorothy Sayers, Dashiell Hammett and more. 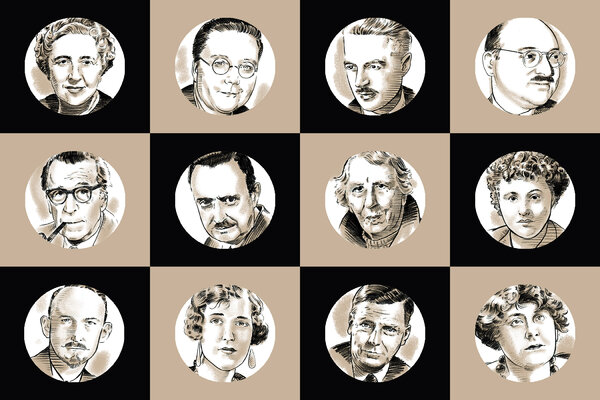 ‘The Mysterious Affair at Styles,’ by Agatha Christie

Though this may be the first published book of Miss Agatha Christie, she betrays the cunning of an old hand. She first presents the mysterious affair of Styles and then proceeds to make it more and more mysterious by leading us gently to all sorts of wrong theories about the criminal.

Mrs. Inglethorpe, rich, elderly lady, is found early one morning writhing in pain from the effects, as it is determined later, of poison. She dies with the name of her husband on her lips. This husband (her second) had been her secretary, and was 20 years younger than she. There was “the most awful row” between Mr. and Mrs. Inglethorpe on the day preceding the crime, the same day Mr. Inglethorpe was declared by the village chemist to have bought a bottle of strychnine on the pretext of having to kill a dog.

Mr. Inglethorpe would certainly have been arrested there and then had it not been for a certain delightful little old man, a refugee from Belgium and formerly a famous detective, who took a hand in the case. He prevented the arrest by producing an unimpeachable alibi for Mr. Inglethorpe. But if you think that ends the story you are mistaken. You must wait for the last-but-one chapter for the last link in the chain of evidence that enabled M. Poirot to unravel the whole complicated plot and lay the guilt where it really belonged. And you may safely make a wager with yourself that until you have heard M. Poirot’s final word on the mysterious affair at Styles, you will be kept guessing at the solution and will certainly never lay down this most entertaining book. [Review first published Dec. 26, 1920]

‘Whose Body?’ by Dorothy Sayers

A new member of the extensive and entertaining fellowship of detective story writers, Miss Dorothy L. Sayers presents as her initial offering a very ingenious tale. Its leading character is a certain genial and eccentric Lord Peter Wimsey, younger brother of the Duke of Denver, who has taken up amateur detecting as a pastime. Closely associated with him is a professional from Scotland Yard, Mr. Parker, who does the routine work. Bunter, Lord Peter’s very capable man, is useful in other ways than his avowed duties of valet and butler.

The mystery which engages these three very different persons is a double one. In other words, there are two strange events, and in the beginning there is no apparent connection. The first is the discovery by a timorous and eminently respectable architect of the nude body of a murdered man, neatly disposed in his bathtub, decorated with a pair of gold-rimmed pince-nez. The second is the disappearance of the wealthy financier Sir Reuben Levy, who, his cook testified, had come home at midnight and gone to his room. Before morning he had vanished. But not one stitch of clothing had vanished with him; not even his spectacles, which his nearsightedness made absolutely indispensable. What connection was there between the two events? And whose body was it in the bathtub, since it was very certainly not that of Sir Reuben Levy?

If Miss Sayers can maintain the standard she has set for herself in this tale, there seems to be no reason the discerning, but by no means infallible, Lord Peter should not become one of the best-known and best-liked of the amateur detectives of fiction. [Review first published May 27, 1923]

If the locution “hard-boiled” had not already been coined it would be necessary to coin it now to describe the characters of Dashiell Hammett’s latest detective story. All the persons of the book are of that description, and the hardest boiled one of the lot is Sam Spade, the private detective, who gives the impression that he is on the side of the law only when it suits. If Spade had a weakness it would be women, but appreciative as he is of their charms, never, even in his most intimate relationships, does he forget to look out for the interests of Samuel Spade. And it is well that he does, for the criminals with whom he comes in contact are almost as hard-boiled as he. Mr. Hammett, we understand, was once a Pinkerton’s operative, and he probably knows there is very little romance about the detective business. There is none of it in his book, but there is plenty of excitement. [Review first published Feb. 23, 1930]

Miss Abigail Doorn, founder and patron of the Dutch Memorial Hospital, had been seriously injured when she fell down a flight of stairs. Dr. Janney, a weird little surgical wizard, directed that an immediate operation be performed. Ellery Queen, one of our most intelligent and logical detectives, happened to be visiting the hospital and had been invited to witness the operation. When Miss Doorn, with much clinical detail, is wheeled into the amphitheater, it is discovered that she has been strangled. The strands of the story are further tangled when Dr. Janney is also killed. Queen, aided by his father, sets out to ascertain who it was that impersonated Dr. Janney when Miss Doorn was slain. It was someone who knew every mannerism of the little surgeon, walked boldly into an antechamber off the operating theater and, while a nurse made the last preparations, fixed a fine wire about the old woman’s neck. The book is thoroughly engrossing. — Bruce Nae [Review first published Oct. 4, 1931]