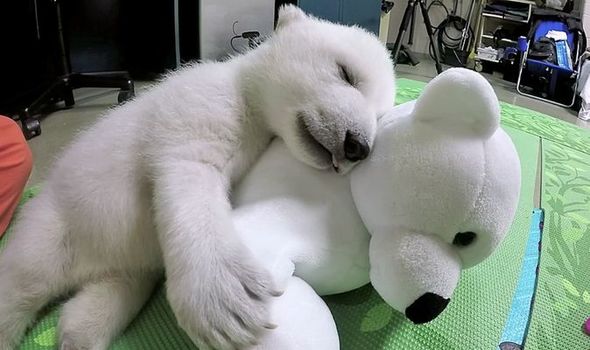 Her only sense of the world around her came from smell, and her nose led her in one direction: towards the heat of her mother, a 600-pound polar bear named Aurora. Their den at a zoo in Columbus, Ohio, was made of cinder block, painted white and illuminated by a single red bulb in the ceiling. The floor was piled high with straw. The air, heavy with captive musk and kept artificially cool to mimic the Arctic, was pierced periodically by Nora’s cries.

Born a twin, her sibling had died the following day. Nora slept a lot, waking only to nurse, which she did greedily and often, with a soft whir that sounded like a tiny outboard motor.

Around 9am on Nora’s sixth day, Aurora rose, stretched, and ambled out of the den. The cub was completely reliant on her mother and, alone and vulnerable without her, she screeched as she searched for something familiar. When there was no answer, she began to wail.

It was 10 months later that I met Nora for the first time.

The polar bear cub, now weighing nearly 300 pounds, looked at me with curious brown eyes as she suckled on the bars of the crate that brought her to Portland. She had arrived at Oregon Zoo a couple of days earlier but had already caused quite a stir.

Newborn polar bears usually spend their first two years with their mothers but, after her abandonment in November 2015, Nora had been hand-raised by a team of keepers and veterinarians. Most cubs born in captivity live less than a month. Only about a third survive to adulthood.

When keepers are forced to raise cubs, the odds are even worse. Cubs can’t regulate their temperature and, without their mothers, they succumb to disease and infection. Just a handful had been successfully raised from such a young age, so Nora was an exceedingly rare creature and likely to become an ambassador for her species. 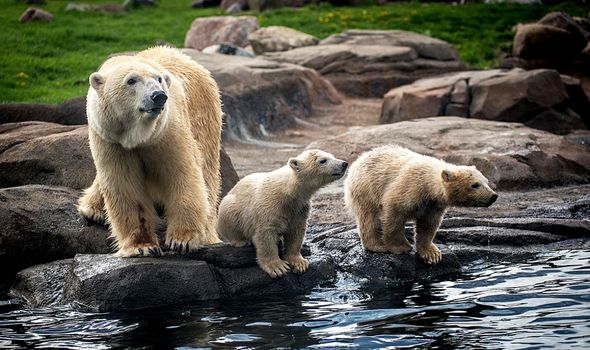 Polar bears have long been the face of climate change. They are opportunistic hunters, eating whatever they can catch, including walrus and small whales. But they have historically relied on seals for food. Seal blubber was the only food dense enough in calories and plentiful enough in Arctic waters to support an animal that can grow to 1,700 pounds, up to half of which can be fat.

So polar bears came to bring the full measure of their cunning, patience and brute strength to hunt their main prey. Their sense of smell became so powerful they could locate seals through several feet of ice. They learned to find the air holes seals use to breathe, and wait.

Sometimes that wait could last for days. When the seal surfaced, the bear learned to plunge its long neck into the water, haul out the seal, and crush its skull.

A diet so rich in fat would prove fatal to humans, but polar bears persist, even thrive, with extremely high levels of cholesterol. They gained the ability to metabolise vast amounts of fat without clogging their arteries, taking it out of the bloodstream and storing it for insulation. But to get the fat they need, polar bears need seals. To get seals, they need ice.

But with Arctic ice sheets melting due to global warming, so the frozen hunting platforms the bears rely on to survive have been shrinking. What I didn’t know when I first set eyes on Nora was how closely her story was connected to the ways climate change was altering the lives of the people living in the Arctic.

The polar bear’s habitat is changing. But so, too, is our own. 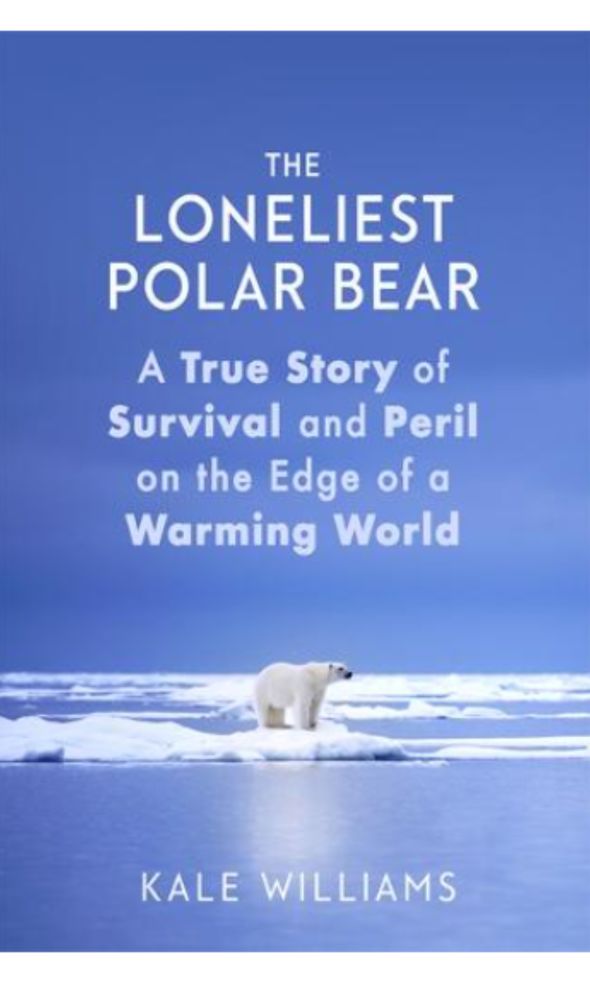 Back at The Oregonian newsroom, the daily paper in Portland where I work, my editor suggested I trace Nora’s lineage back to the last time any of her relations were in the wild.

I asked Columbus zoo about Nora and it emerged her father, Nanuq, had the more interesting story of her two parents.

Nanuq had been orphaned as a wild cub in Alaska nearly 30 years previously. In 1988, Gene Agnaboogok, a hunter from a native Alaskan village called Wales, fell into a polar bear den. Forced to kill the mother to save his own life, he rescued her two cubs, one of which was Nanuq.

A gregarious creature, he sired five litters including Nora’s before he died aged 29, well beyond the typical lifespan of a captive bear.

In March 2017, I travelled to Wales, home to about 150 people on the westernmost tip of the North American continent. As my small plane approached the landing strip, it was difficult to tell where land ended and the ocean began. Ice stretched more than a mile into the Bering Strait. I met Gene in the home he’d grown up in and where he first brought the cubs. His earliest Inupiat ancestors are thought to have populated Alaska’s north and west coasts as early as the year 1000.

Theirs was a culture of cooperation and sharing, of trade between villages.

They learned the migration patterns that brought different kinds of prey within hunting distance, how to harvest what they could from the unforgiving land and sea. Each generation refined that knowledge, over thousands of years, and passed it on to the next. They hunt moose and caribou and, in recent years, wolverines which are known to walk the tundra around the cape. 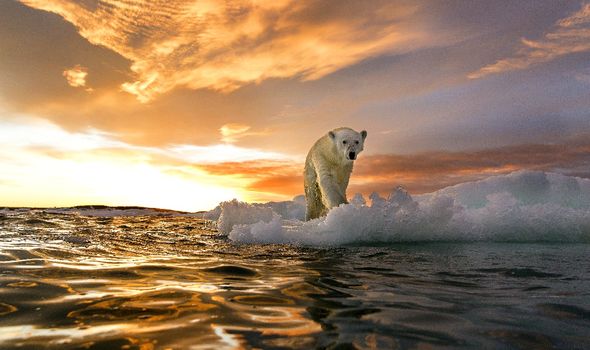 The polar bear is also prized, and a hunter’s first kill is thought of as a rite of passage. Gene got his first bear when he was around 20. But things were changing for bears and humans.

On my first visit four years ago, it was bitterly cold. The sea ice near the shore was several feet thick. In 2019, at the same time of year, it was warm enough that rain, not snow, fell. The Bering Sea was open water.

Temperatures in the Arctic fluctuate from year to year, so there’s no way to pin the warm winter of 2019 directly to climate change. But it was a stark illustration of trends climate scientists have been observing for decades. The entire globe is getting hotter, but nowhere is getting hotter faster than the far north.

As a species, polar bears have adapted to life in the Arctic over thousands of generations. Inupiat hunters like Gene have adapted similarly. Their hunting strategies and traditions are based on a consistent climate, though, and the rate of change in the Arctic threatens to outpace their adaptive ability and that of the polar bear.

In captivity, Nora was left with skeletal issues after failing to absorb vital nutrients from the formula milk fed to her.

When she got to Oregon, keepers hoped an older bear named Tasul, at 31, one of the oldest polar bears alive, could act as a mentor, teaching her the things about being a polar bear her human carers could not.

But Nora and Tasul did not get along and the older bear died weeks after Nora’s arrival of cancer. Nora’s keepers subsequently noticed the younger bear was showing signs of anxiety and depression. She was put on medications – including Xanax and fluoxetine, a generic version of the antidepressant Prozac – to help keep her calm.

With Nora still desperately in need of a companion of her own species, she was moved again, this time to Hogle Zoo in Salt Lake City, Utah. A companion had been found: a bear from Toledo, Ohio, born only about a month after Nora.

The Toledo bear’s mum was Nora’s grandmother. So Nora’s new companion Hope, though younger than her, was her aunt. The Hogle zookeepers did everything they could to acquaint the two bears.

Nora and Hope were in separate holding areas, but the keepers had been passing toys between them so they could get used to each other’s scents. Before long it was time for them to meet face-to-face.

Though Hope had a weight advantage, she was never aggressive and never intruded into the personal space Nora clearly needed.

At one point she even grabbed a toy in her jaws, trotted towards Nora and dropped it at her feet, almost like a peace offering.

It was another major milestone.

Over the course of her life so far, Nora’s keepers had kept her warm, held her tight, and waded into the water to show her it was safe. They taught her patience, managed her pain and helped her adapt to companionship.

But they couldn’t conjure the Arctic from concrete, turn the ocean into ice or set Nora free. No matter what anyone did, Nora’s life would never unfold as nature intended.

Like the polar bear and the people of the far north, our own way of life and the infrastructure that makes it possible, was created under a consistent climate.

Every positive action we take today, individual and systemic, helps decrease carbon dioxide concentrations in the atmosphere trapping heat at the surface of our planet.

Individual actions alone will not stem the warming tide, only change on a global scale will. Success will be fleeting and hard to quantify but to protect our most vulnerable, the moral imperative on us is not to succeed, but to try.

Earlier this year it was announced Hope would move to a Chicago zoo for mating. Nora, now five, is back in Oregon. A female companion will join her in the autumn. I look forward to following her story further.

● The Loneliest Polar Bear: A True Story of Survival and Peril on the Edge of a Warming World by Kale Williams (Sphere, £16.99) is out now. For free UK delivery, call Express Bookshop on 01872 562310 or order via www.expressbookshop.co.uk