Closing the gender gap: Book reviews women can count on

The disparity between reviews of books written by women and men in major Australian publications has dramatically closed in the past seven years, a new report has found.

But the problem of "gender silos" where men review male authors and women female authors has not disappeared from the pages of online and print newspapers, and literary and trade journals. 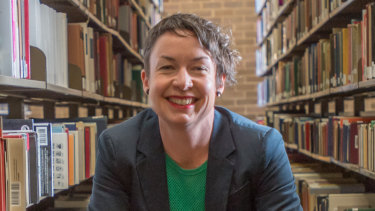 Dr Julieanne Lamond has found that the Stella Count is narrowing the gender gap in literature reviews.Credit:Karleen Minney

Nearly two of every three books women reviewed in 2018 were by female authors, according to the annual Stella Count, which potentially perpetuated cultural biases that suggest writing by women was for women only.

Since 2012 organisers of the Stella literary prize for Australian women’s writing, have commissioned an analysis of the gender split around reviewers and authors in literary publications.

Its latest report showed a shift in the scope for what kinds of books and subjects were considered of the highest literary merit and worthy of review.

A 2015 study of the Australian book industry by Macquarie University found female authors account for about 66 percent of books written in Australia.

Around 3000 books were deemed worthy of review each year and until the Stella Count most of these had been authored by men.

For the first time since the count began gender parity has become the rule rather than the exception, said the report's co-author, Australian National University English lecturer Julieanne Lamond.

Of the 12 surveyed publications nine reached parity last year, from a low point of just one in 2013 and 2015.

The Age/Sydney Morning Herald was among three publications never to have achieved parity in the seven years of counting. The others were The Weekend Australian and the Australian Book Review.

The Age/Sydney Morning Herald, at 48 percent, is very close to reaching the target.

Another change had come in large reviews, considered the prime real estate of book pages. In 2017, only 36 percent of long published reviews were of books written by women. A year later it was 47 percent.

In non-fiction, women authors have been gaining more attention with 58 percent of all reviewed books written by men, down from 63 percent in 2017. In 2018, reviewed non-fiction works were equally split between male and female reviewers.

The results were proof that holding publications to account had worked to bring about a shift in cultural assumptions, Dr Lamond said.

It justified expanding the count to acknowledge differing gender identities and gender’s intersection with race, ethnicity, sexuality, and disability.

The #MeToo Movement had also been implicated in the push for broader cultural change, Dr Lamond said. "Broader literary feminism is the groundswell behind the idea that gender equality matters."

Australia fared better than the international literary scene where the 2017 VIDA Count found articles by women comprised less than 40 percent of all reports published across eight of 15 prestigious publications. The New York Review of Books was the most skewed toward male writers with fewer than one in four pieces published in its pages written by women.

But Dr Lamond said it was still the case in Australia that men tended to review books by men. More than two-thirds of all reviews were gender-matched.

"It's carrying over the cultural assumption you see in children's and Young Adult books that there are boy books and girls books."