Just pages into the prologue of “This Is the Fire,” the reader finds the author in tears. Picking up on the title’s allusion to James Baldwin, the prologue is written as a letter from the author to his nephew after the 2020 police killing of George Floyd. “Watching this shocking footage, I and every other Black man I know saw the insensibly sluggish murder of ourselves,” the CNN anchor Don Lemon recounts. “In agonized real time, I saw Billie Holiday’s strange fruit hanging from the poplar tree. I had to close my door and cry.”

It’s a moving moment, infused with both the weight of history and the relatability of the present. While this book is ostensibly addressed to his nieces and nephews, it’s hard not to picture Lemon speaking each sentence through a camera to an unseen audience of millions.

To the extent that we’re currently having a national dialogue about race in the United States, Lemon is among those hosting it. Perhaps the most prominent person of color on cable news — anchoring CNN’s 10 p.m. to midnight weekday coverage — Lemon is, as one Mediaite columnist recently put it, the network’s “openly Black” voice. His coverage of race is intertwined with his personal identity: Lemon testifies to his own traumas for the benefit of the viewer’s understanding, speaks racial truths painfully obvious to Black viewers yet shocking to some white viewers, and urges the audience to keep up as he walks through the basics and begs his viewers to believe their veracity. Thus is the torturous job of the Black journalist working for the white media.

“White brothers and sisters: Pocket that But I’m Not Racist! card. I don’t want to hear about your Black girlfriend in college, or your Black postman to whom you give fruitcake every Christmas, or that Black comp and lit teacher who totally, like, rocked your world. It doesn’t matter if you are racist or not racist or antiracist; our society is racist,” Lemon explains early on, clearly exasperated.

Unconstrained from the limitations of the news cycle, “This Is the Fire” is Lemon’s attempt at keeping that conversation about race going. In the book, he delivers a forthright, historically supported examination of the racial divisions that have plagued our nation. 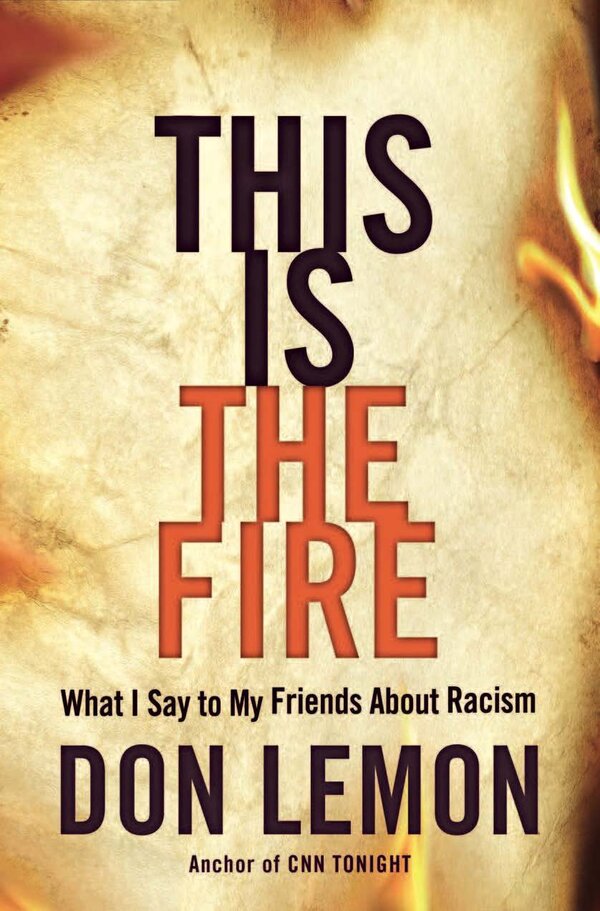 Lemon’s style will be familiar to anyone who’s read his 2011 memoir, “Transparent,” or even to anyone who regularly watches him on CNN. He has written much of “This Is the Fire” in his own, easily recognizable voice, and he explores a number of the most controversial issues of our times — including police shootings and fights over Confederate monuments — by pairing the transcripts of interviews he’s conducted on air with the kind of fully researched context too often absent from cable news.

Much like his show, the book jumps around in both content and tone. Sections exploring deep American history suddenly give way to contemporary anecdotes. The pandemic-shuttered businesses of Long Island begin to “reopen like tentative amber snails, extending one tentacle at a time to feel out the humidity after an early summer storm.” A few lines later, “Dr. Fauci” shows up with no first name or title. If you’re a regular viewer, after all, you certainly know who that is.

Lemon is at his strongest when he turns his gaze backward, blending our nation’s history with his own. His childhood in suburban Baton Rouge provides the opening to explore Louisiana’s history of white supremacy and Black subjugation. The Hamptons home he shares with his fiancé, Tim, becomes a reason to explore Maude Terry’s efforts in the 1940s and ’50s to establish a Black community along the Long Island waterfront. The tragic drowning of his sister Leisa in 2018 gives way to some of the most heartbreaking prose of the book — “The loss of a sibling is a precise, localized agony, the loss of a reflected self” — as Lemon explores the objectification and commodification of Black death, from the lynching postcards of the 1900s to the police shooting videos that play on loop many nights on shows like his own.

“We need to know the objective truth of what happened, not the reflexively self-justifying version of events espoused by the officers involved and championed by knee-jerk law-and-order conservatives,” Lemon writes in regards to police killings. “At the same time, it’s our responsibility to provide context, lest those images convey the same chilling message as the bloody pikes posted downriver from Baton Rouge: Know your place, Black child, or this could be you.”

Lemon doesn’t propose specific policy or cultural changes — it’s the journalist’s job to document in vivid detail the depth of the problem, not necessarily to provide the solution — but he makes it clear that he believes the first step toward changing our nation is a shared understanding of our collective history. “We didn’t get here by accident. The moment in which we find ourselves, as a nation and as individuals, was purposefully contrived by people whose agenda had nothing to do with creating a better world,” he writes early in the book.

It’s both direct in tone and obvious in content — the type of unsparing historical statement from an “openly Black” news anchor likely to prompt some white viewers to clutch their pearls even as Black viewers look at one another and unemotionally remark, “Yeah, we already knew that.”

As a factual matter, Lemon is right: We have not arrived at this moment, our “race problem” deeply unresolved, by mistake. What remains unclear is whether Lemon’s white readers, and viewers, will be willing to believe it.