In the summer of 1936, Theodor Geisel was on a ship from Europe to New York when he started scribbling silly rhymes on the ship’s stationery to entertain himself during a storm: “And this is a story that no one can beat. I saw it all happen on Mulberry Street.”

The rhymes morphed into his first children’s book, “And to Think That I Saw It on Mulberry Street,” about a boy who witnesses increasingly outlandish things. First published in 1937, the book started Geisel’s career as Dr. Seuss. He went on to publish more than 60 books that have sold some 700 million copies globally, making him one of the world’s most enduringly popular children’s book authors.

But some aspects of Seuss’s work have not aged well, including his debut, which features a crude racial stereotype of an Asian man with slanted lines for eyes. “Mulberry Street” was one of six of his books that the Seuss estate said it would stop selling this week, after concluding that the egregious racial and ethnic stereotypes in the works “are hurtful and wrong.”

The estate’s decision — which prompted breathless headlines on cable news and complaints about “cancel culture” from prominent conservatives — represents a dramatic step to update and curate Seuss’s body of work, acknowledging and rejecting some of his views while seeking to protect his brand and appeal. It also raises questions about whether and how an author’s works should be posthumously curated to reflect evolving social attitudes, and what should be preserved as part of the cultural record.

“It will cause people to re-evaluate the legacy of Dr. Seuss, and I think that’s a good thing,” said Philip Nel, a children’s literature scholar at Kansas State University and the author of “Dr. Seuss: American Icon.” “There are parts of his legacy one should honor, and parts of his legacy that one should not.” 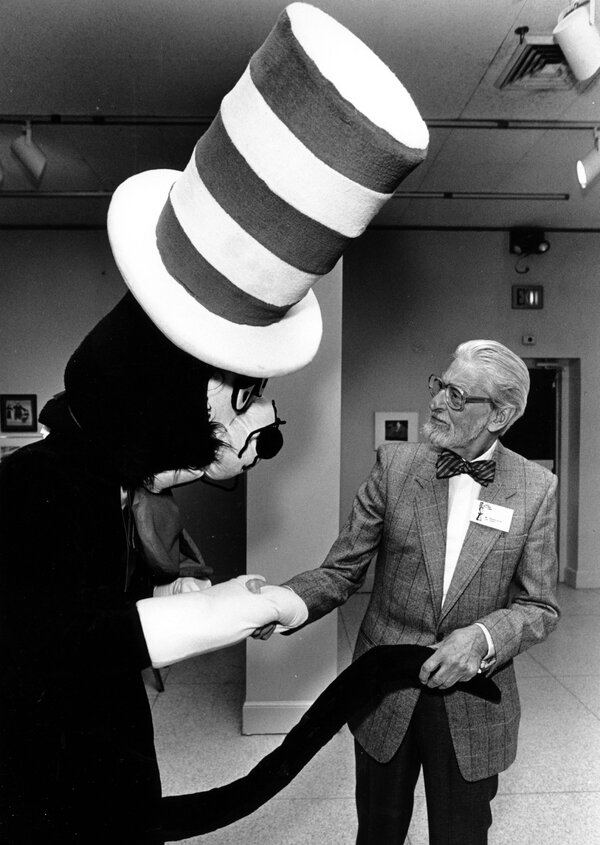 Classic children’s books are perennial best sellers and an important revenue stream for publishers. Last year, more than 338,000 copies of “Green Eggs and Ham” were sold across the United States, according to NPD BookScan, which tracks the sale of physical books at most retailers. “One Fish Two Fish Red Fish Blue Fish” sold more than 311,000 copies, and “Oh, the Places You’ll Go!” — always popular as a high school graduation gift — sold more than 513,000 copies.

“And to Think That I Saw It on Mulberry Street,” one of the six books pulled by the estate, sold about 5,000 copies last year, according to BookScan. “McElligot’s Pool” and “The Cat’s Quizzer” haven’t sold in years through the retailers BookScan tracks. Putting the merits of the books aside, removing “Green Eggs and Ham” would be a completely different business proposition from doing away with new printings of “McElligot’s Pool.” (Though the news that the books would be pulled caused a burst of demand, and copies of “Mulberry Street” were listed on eBay and Amazon for hundreds or thousands of dollars on Wednesday.)

Dr. Seuss is perhaps the most beloved children’s book author to come under criticism for outdated and insensitive depictions of racial, ethnic, cultural and gender differences.

In recent decades, librarians and scholars have led a push to re-evaluate children’s classics that contain stereotypes and caricatures. Editions of illustrated series like “Tintin” and “Babar,” which have long been accused of promoting colonialist and imperialist viewpoints, have been withdrawn from some libraries following criticism that their European authors depicted nonwhite characters as savages.

Children’s publishers and literary estates are trying to walk a delicate line by preserving an author’s legacy, while recognizing and rejecting aspects of a writer’s work that are out of step with current social and cultural values.

Some authors self-edited their work in response to criticism. In the 1970s, Roald Dahl revised “Charlie and the Chocolate Factory,” which originally depicted the factory workers as dark-skinned pygmies from Africa. After facing charges of racism from the N.A.A.C.P., Dahl made the workers Oompa Loompas from a fictional country called Loompaland. The revision failed to appease those who contend that the Oompa Loompas are essentially indentured servants, and other critiques of some of Dahl’s works, like “The Witches,” which many regard as anti-Semitic, have endured.

Occasionally, publishers have made tweaks to illustrations and texts to refurbish outdated picture books. Fans of Richard Scarry, the prolific children’s book author and illustrator, have noted ongoing updates to his works to erase archaic gender roles and racial stereotypes. Over the decades, his books, which have sold more than 160 million copies, have been revised to better reflect gender equality, so that a bear “policeman” became a female bear “police officer,” and a mother cat pushing a stroller became a father cat. Later editions also sought to eliminate racial stereotypes, for example, by deleting an image of an “Indian” mouse in a feathered headdress next to an ice cream cone to illustrate the letter “I.”

In rare instances, works have been taken out of circulation. Hergé’s “Tintin in the Congo,” which is no longer widely available in the United States, became part of a controversy called “Tintingate” about a decade ago after librarians and booksellers in the United States and Britain removed the book from children’s sections. More recently, some new children’s books have come under scrutiny for insensitive or inaccurate depictions of race, sometimes leading them to be postponed, or even recalled and pulped. In 2016, Scholastic pulled a picture book, “A Birthday Cake for George Washington,” from stores after critics said it glossed over the horrors of slavery.

Many were stunned by the Seuss estate’s decision, however, which was announced on Tuesday to coincide with Dr. Seuss’s birthday. In a statement, Dr. Seuss Enterprises said it decided to discontinue those six titles last year, after consulting a panel of experts, including educators, to review its catalog.

Geisel, who died in 1991, is best known for whimsical picture books like “Green Eggs and Ham” and “The Cat in the Hat,” as well as works with ethical and moral imperatives to treat others with kindness and care for the planet, like “Horton Hears a Who!” and “The Lorax.”

Scholars have long noted racism in his wartime political cartoons, which he later offered a halfhearted apology for, saying they were the result of “snap judgments that every political cartoonist has to make.” Others have noted anti-Semitic and Islamophobic overtones in the comics and advertisements he wrote before and during his career as a children’s book author.

Scrutiny of his picture books has started to gain momentum more recently. In his 2017 book titled “Was the Cat in the Hat Black?: The Hidden Racism of Children’s Literature, and the Need for Diverse Books,” Mr. Nel, the Kansas State University professor, made the case that the beloved character had roots in blackface minstrelsy. In 2019, an academic journal dedicated to the study of diversity in children’s literature published “The Cat Is Out of the Bag: Orientalism, Anti-Blackness, and White Supremacy in Dr. Seuss’s Children’s Books,” a paper examining racism and bias in Dr. Seuss’s books.

The authors, Katie Ishizuka and Ramón Stephens, argued that much of Dr. Seuss’s work exhibited racism or bias against Black, Asian, Mexican, Native American and Jewish people, as well as women and other groups. “Minimizing, erasing or not acknowledging Seuss’ racial transgressions across his entire publishing career deny the very real historical impact they had on people of color and the way that they continue to influence culture, education, and children’s views of people of color,” they wrote.

Regardless of the content, books go out of print every day if they don’t sell, and indeed, some of the Seuss books would likely be in that category if they had been written by another author. Valerie Lewis, a co-owner of Hicklebee’s bookstore in San Jose, Calif., said that sort of attrition is perfectly sensible, but pulling a book altogether for political reasons makes her uncomfortable.

“I think when there is something in a book that you find offensive, what a great teaching opportunity,” Ms. Lewis said.

“We all have a choice as to whether we buy it or not,” she added, “but removing it kind of makes me want to shake my head.”

The reaction to Tuesday’s announcement was one of swift derision from many conservative politicians and commentators, including Donald Trump Jr. and House Minority Leader Kevin McCarthy, who complained on the House floor that Democrats were outlawing Dr. Seuss. He posted a YouTube video of himself the next day reading “Green Eggs and Ham.”

For many people, regardless of their politics, there is a disconnect between books that feel cozy and familiar from their childhood, and accusations that they could be offensive or hurtful.

“Folks are not remembering the text itself, they are remembering the affective experiences they had around those texts,” said Ebony Elizabeth Thomas, an associate professor at the University of Pennsylvania Graduate School of Education. “White children or parents might not have noticed the offensive anti-Asian stereotyping in ‘Mulberry Street.’ I certainly didn’t.”

The ongoing re-evaluation of these classic works is part of a larger debate about a lack of representation in publishing, and there has been an effort to diversify not just children’s book characters but also their creators. Data compiled by the Cooperative Children’s Book Center at the University of Wisconsin-Madison’s School of Education in recent years has shown a significant increase in the number of authors and characters of color in the books it tracks. There remains, however, a long way to go.