For His Father and His Son, Ai Weiwei Is Determined to Leave a Trace 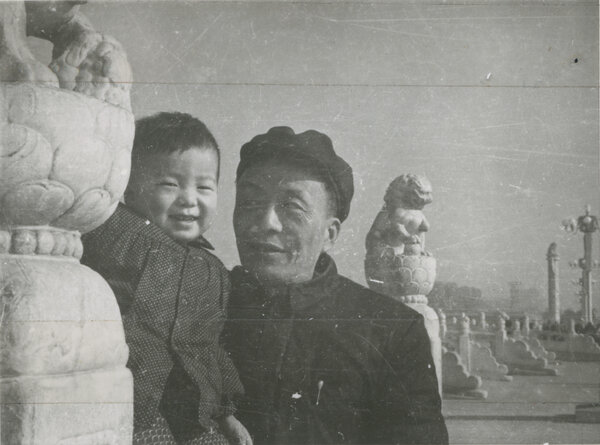 1000 YEARS OF JOYS AND SORROWS
A Memoir
By Ai Weiwei
Translated by Allan H. Barr

“You’re just a pawn in the game, you know,” a public security officer summarily informs Ai Weiwei, China’s most controversial — and to the Chinese Communist Party, its most dangerous — artist. It is 2011 and Ai, suspected of “inciting the subversion of state power,” has recently been held captive for 81 days; soon after his release, he is slapped with a tax bill equivalent to $2.4 million. According to the officer, Ai’s high profile has made him an expedient tool for Westerners to attack China, but “pawns sooner or later all get sacrificed.” Of course, it’s obvious that Ai also regards the officer as a pawn, one who, in serving an oppressive regime, has sacrificed his freedom to speak for himself.

In his first memoir, “1000 Years of Joys and Sorrows,” Ai recounts this and other showdowns with the state — confrontations that, alongside his iconoclastic art, have both forged his status as an international icon and forced him to work in political exile. The book takes its title from verses that his father, the famed poet Ai Qing, wrote while visiting the ruins of an ancient city on the Silk Road: “Of a thousand years of joys and sorrows / Not a trace can be found.” During his months in detention, Ai became determined to leave a trace; regret about the unbridgeable gap between himself and his late father, and the fear that his young son might never know who his father really is, gave rise to the idea of a book.

Ai’s story begins with his childhood, years of which were spent living with his father in the remote hinterlands of China, where Ai Qing was exiled in 1967 to do reform labor during Mao’s murderous purge of intellectuals. While his father was cleaning latrines, scraping feces that had frozen “into icy pillars,” 10-year-old Ai built the stove, fetched water from the well and endured a life that resembled “an open-ended course in wilderness survival training, if we were lucky enough to survive.” During countless “denunciation meetings” of which Ai Qing was a primary target, the author bore intimate witness to his father’s ritualized humiliation. “The estrangement and hostility that we encountered from the people around us instilled in me a clear awareness of who I was,” Ai writes, “and it shaped my judgment about how social positions are defined” — and the necessity of enemies in the rhetoric of revolution.

Interspersed throughout this narrative are flashbacks to the senior Ai’s birth, his childhood as the eldest son of prosperous landowners who often abandoned him to the care of his nursemaid, a loving peasant woman named Big-Leaf Lotus. The collapse of the Qing dynasty in 1911 mired the country in turmoil, but it also stirred in its youths new possibilities for the future. At 19 Ai Qing traveled to France, where exposure to Apollinaire and Breton reshaped his aesthetic sensibility and honed an appreciation for the relationship between art and politics. Upon his return to China in 1932, he was arrested in Shanghai’s French Concession for “causing a public disturbance through Communist Party activities,” an offense for which he served almost three years in prison. It was from behind bars that Ai Qing composed his first masterpiece, “Dayanhe, My Wet Nurse,” a tender tribute to Big-Leaf Lotus and her countless Chinese countrywomen who toil and perish in obscurity.

An illuminating through-line emerges in the many parallels Ai traces between his life and his father’s. The charge of “damaging the republic” for which Ai Qing was incarcerated is not unlike the political crime of “inciting subversion” his son is jailed for 80 years later. Similarly, a Western metropolis — New York — would become for Ai Weiwei what Paris was for his father: a kaleidoscopic swirl of influences that catalyzes new ways of seeing.

If Ai Qing was tentatively searching for a new vernacular to democratize the subject and scope of poetry, Ai Weiwei found in the technology of communication a way to democratize his audience. In 2005, Ai discovered the blogosphere, where he accrued a large following with his singular, irreverent voice: “I was like a jellyfish, and the internet had become my ocean.” Like his blog entries, Ai’s art — whether it’s a 1995 photograph that captures him flipping the bird to Tiananmen Square, or an architectural installation made up of rebar mangled in the 2008 Sichuan earthquake, or the numerous documentaries that expose the negligence and corruption of Chinese authorities — is forged “in a state of flux,” always operating within and reacting to the constraints of an evolving reality.

Ai claims that unlike his father, “I lacked that ability to harness the power of words”; but this isn’t true. He is most eloquent when he stops pontificating on art and surrenders, almost despite himself, to the act of remembering. Ai writes evocatively of the nights spent in his detention cell when “all I could do was use memories to fill the time, looking back at people and events, like gazing at a kite on a long string flying farther and farther, until it cannot be seen at all.” Most poignant are his midnight conversations with the young, rural-born men employed to guard his door, their cracking joints reminding Ai of “a crisp snapping sound like a turnip being broken into two pieces.” The guards “gradually became fully, noisily human to me,” Ai writes. “They were like me, in a way, confined and constricted, their present ruptured from the past, and lacking anticipation of their future.” Recalling Ai Qing’s affection for Big-Leaf Lotus, this moment catches Ai freed from his self-appointed role as provocateur, and permits him the artist’s most mundane liberty: to observe the world dispassionately and recognize in himself and others that most human capacity to be simultaneously both prisoner and guard, player and pawn.

In the final pages of the book, Ai writes that “advocacy of freedom is inseparable from an effort to attain it, for freedom is not a goal but a direction, and it comes into being through the very act of resistance.” Remembering, too, is a form of resistance. In documenting the past, he is also repudiating the country’s generations of imposed amnesia. “After all the convulsions that China had experienced, genuine emotions and personal memory were reduced to tiny scraps and easily replaced by the discourse of struggle and continuous revolution,” Ai writes. In “1000 Years of Joys and Sorrows,” Ai does not allow his own scraps to remain buried. To unearth them is an act of unburdening, an open letter to progeny, a suturing of past and present. It is the refusal to be a pawn — and the most potent assertion of a self.