George Washington Slept Here? Then So Will Nathaniel Philbrick. 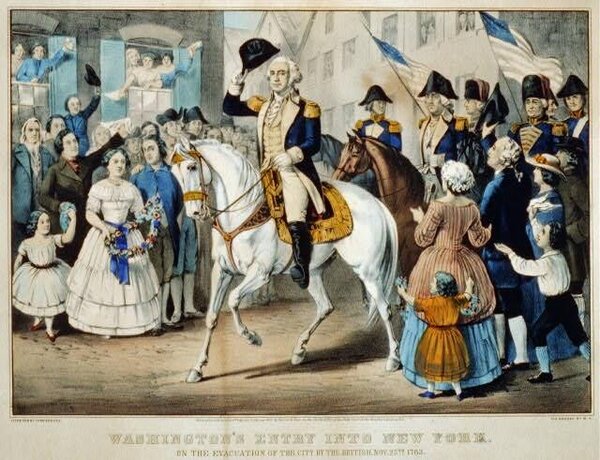 Early in his first term as president, George Washington visited every state in the Union. The United States was relatively new, having won its independence half a dozen years earlier; the presidency and the Constitution were brand-new. Think of Washington’s trips as test-drives.

Nathaniel Philbrick is a prizewinning maritime historian who has recently turned his attention to the founding period. “Travels With George” is an account of his retracing Washington’s footsteps — and carriage tracks — accompanied by his wife, Melissa, and their Nova Scotia duck tolling retriever, Dora. The book is a hybrid: part history, part travelogue.

Philbrick’s survey of Washington’s journeys draws on his own knowledge of the period, and on his eye for detail. He begins with Washington’s eight-day trip in April 1789 from Mount Vernon to New York City, then the nation’s capital, to be inaugurated. Washington’s election had been unanimous, and his journey through Maryland, Delaware, Pennsylvania and New Jersey was a rolling ovation. The crowds that greeted him when he arrived in New York, one congressman wrote, were “thick as ears of corn before the harvest.” In the fall of 1789 he spent a month traveling in Connecticut, Massachusetts and New Hampshire. (Rhode Island, still hesitating to ratify the Constitution, was pointedly excluded; he picked up that state in August 1790 after it had seen the light.) In April 1790 he toured Long Island, possibly to thank the members of the Culper Ring, the spies who had kept watch on British-occupied New York during the Revolution; protective of his assets, like all good spymasters, he never admitted that this was what he was doing. His journey through Virginia, the Carolinas and Georgia in the spring and early summer of 1791 was a bear, taking three months to cover more than 1,800 miles.

Washington, according to a French diplomat at the time, had “the advantage of uniting great dignity with great simplicity of manner.” This gift enabled him to embody both the monarchical and populist yin and yang of the presidency. In Boston, homeowners rented their windows so that admirers could get a glimpse of him; in Charleston he was greeted by the intendant (mayor) carrying a six-foot-tall gold crowned staff. In Cold Spring Harbor, Long Island, by contrast, he stopped to help raise a rafter of a one-room schoolhouse, led the workmen in three cheers and left a dollar to treat them. He made a point of staying in inns and paying his own way, so as not to be beholden to anyone, but this independent-mindedness caused difficulties of its own. Twice in New England, hostelries turned him away; once in North Carolina his entourage, after a dawn start, enjoyed a big breakfast at a roadside house only to discover that they had barged into a private dwelling.

Washington had more in mind than scoping out accommodations. As commander in chief during the Revolutionary War, he had already been seen by more of his countrymen than any other living American. By showing himself as president, he wanted to put a face on the new Constitution. Philbrick explains: “Washington was a celebrity and he used that star power to win as much support as possible for a federal government that many in Virginia were predisposed to distrust.” Many elsewhere too. At the same time, Washington was blinkered by his own prestige: People told the hero what he wanted to hear, and so discord that would flower in the first two-party system, pitting his secretary of state, Thomas Jefferson, against his Treasury secretary, Alexander Hamilton, escaped him.

Philbrick’s present-day experiences and thoughts are skippable, except when he wrestles with problems, some of Washington’s vintage, that continue to afflict us. Of greatest concern to us now are slavery and its child, racism. Philbrick introduces us to several enslaved people whom Washington owned: William Lee, the servant who was at his side throughout the Revolution; Ona Judge, who belonged to the estate of Martha’s first husband until she freed herself by fleeing to New Hampshire, from which Washington strove, in vain, to retrieve her. We might have heard more about the 123 others he owned whom he freed in his will. The descendants of one of them, Nancy Carter Quander, hold an annual family reunion. Philbrick could have attended.

The problem of greatest concern to Washington during his presidency was national union. America’s regions barely knew one another; there had been a rebellion of overtaxed farmers in 1786-87 and there would be another in 1794 during his second term. Philbrick quotes Washington’s Farewell Address, delivered in the twilight of his administration. “The name of American, which belongs to you in your national capacity, must always exalt the just pride of patriotism.” It was a hope, more than a statement of fact.

How is the hope faring these days? Philbrick finished “Travels With George” in September 2020. The riots associated with the George Floyd protests had ceased, the Capitol riot was still to come. He ends with an appropriately stern injunction, referencing both Washington and his secretary of state: “The sinews of this country have been stretched to what feels like the breaking point. If those sinews should ultimately fail and the floodgates of rage and disorder swing open, it won’t be Washington’s and Jefferson’s fault. With the combined gift of the Declaration of Independence and the Union, they provided the means for future generations to transcend the injustices and inadequacies of their own time. The fault will lie with ourselves.”