He Read All 27,000 Marvel Comic Books and Lived to Tell the Tale 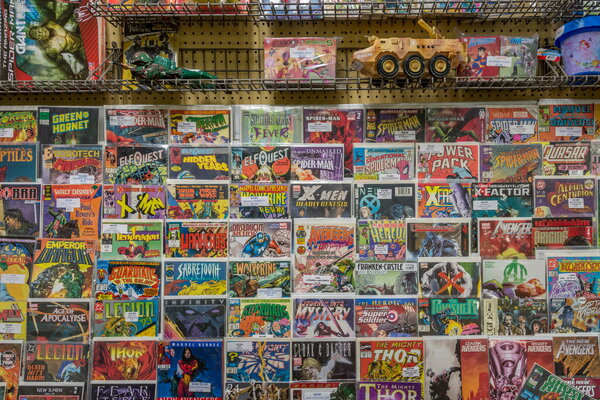 If Western popular culture has a common idiom, a force that binds us all, the stories contained in Marvel comics are probably it. In a few short decades, the Marvel Universe (in all its corporate manifestations) has rewired how millions, perhaps even billions, of people imagine what is possible, what is heroic, what is good. Once confined to dime store spinner racks, Marvel’s creations have burst free of their humble roots, hulking out into one of the most successful transmedia empires on the planet.

That is one version of the Marvel story, perhaps the most obvious. There are others, naturally, as befits a Galactus-size behemoth. There are the lives of the genius creators who broke their backs making it all happen or the perspective of one of the many superhero teams that defines the Marvel brand. Another narrative, though, is hiding in plain sight. It’s the one contained within the 27,000 comic books that Marvel published between 1961 and today — what the writer Douglas Wolk calls “the longest continuous, self-contained work of fiction ever created: over half a million pages to date and growing.”

Wolk, a lifelong comic fan who won an Eisner Award for his excellent “Reading Comics,” wondered (as only a true comic fan could) what those 27,000 comics — the original source for all the movies, TV shows, action figures, cartoons, video games, T-shirts, cosplayers — might say to us as a single body of work.

The result is “All of the Marvels”: Wolk’s brilliant, eccentric, moving and wholly wonderful attempt to distill it all into a coherent narrative.

If you grew up on Marvel comics like I did, “All of the Marvels” will be a gift. If your relationship with the monthly books is at best spotty — if, for example, you can’t tell your Heralds of Galactus from your Brotherhood of Evil Mutants, or your Jack Kirby from your Steve Ditko — “All of the Marvels” will be an eye-opener, and Wolk’s learned enthusiasm will have you dropping coin at your local comic book shop before you turn the last page.

A small warning, though: For a book that moves with the kineticism of a Kirby double-page spread, “All of the Marvels” kicks off on the square side, with Wolk explaining his methodology, laying out which comics he read, and the ones he did not, taking time to address the questions he imagines his readers will have. All necessary, I’m sure, but I won’t lie — the opening few chapters are a bit of a slog, and not at all indicative of what is to come.