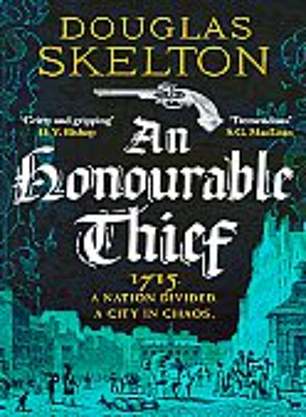 Jonas Flynt is not a man to mess with; battle-scarred, world-weary and with a past that includes highway robbery and murder, Flynt comes armed with two guns named Tact and Diplomacy, a sword stick called Surprise and a sense of honour that is sorely tested by the company he’s forced to keep.

Inveigled by blackmailing spymaster Nathaniel Charters to recover an incendiary missing document belonging to the deceased Queen Anne, Jonas finds himself involved in a complicated plot involving the future of the English Crown.

On the bloody trail of the missing letter, he encounters the delightfully devious Madame de Fontaine and reconnects with family, friends and an old love in his Edinburgh hometown, but finds his loyalty tested as events take a turn for the ugly. Fast, furious and with a glint of gallows humour, this is high-octane historical fiction.

A rubble-strewn, bombed-out Tokyo is the setting for this entertaining mystery classic. It’s 1947 and a heinous murder has been committed; the body has been found but the tattooed torso of the victim is missing.

The story has all the hallmarks of a Japanese noir, with its devious locked-door scenario, the shadowy presence of illegal tattooists, their obsessive clients and a creepily intense professor, who’s hoping to add another skin to his collection.

Add in doppelganger siblings, a detective who blows impeccable smoke rings, his hopelessly naive younger brother who’s infatuated with the murdered woman and a cast of suspects who range from a thuggish Yakuza ex-boyfriend, a rich businessman and a clutch of suspicious siblings, and you have a tale that fizzes with intrigue and ingenuity.

Actor Paterson Joseph elegantly inhabits the real-life character of abolitionist, musician and servant Charles Ignatius Sancho, who was born on a slave ship in 1729 and carved out an exceptional life for himself in Regency London. Now 51, Sancho is gouty, fully alive to his faults, failings and good fortune as he recounts his tumultuous life in a series of letters and diary entries addressed to his young son.

His story marries theatrical dash with the grim realities of life on the capital’s streets, as he recounts his childhood, his education by a philanthropic Duke, his fall from grace, and his gradual transformation into a loving husband and a leader in the fight to end slavery. An impressive debut.