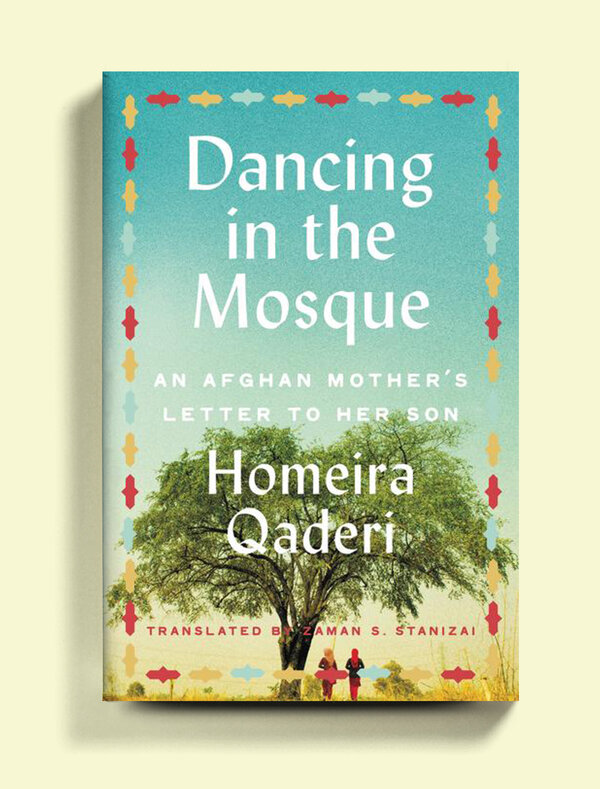 Welcome to Group Text, a monthly column for readers and book clubs about the novels, memoirs and short-story collections that make you want to talk, ask questions, and dwell in another world for a little bit longer.

An Afghan writer and women’s rights activist living in exile in California tells the story of her life through a series of honest, brave letters to the son she had to leave behind. He has been told by his father that she is dead; this book will prove otherwise.

Homeira Qaderi risked everything to tell her story. When you hear what she survived — the Taliban, a refugee camp, marriage to a total stranger — you’ll want to hand her memoir to a friend and say the words that have fueled resistance for centuries: “Pass it on.”

Of all the indignities and tragedies Homeira Qaderi and her family endured when the Taliban seized Herat, Afghanistan, the most poignant to read about is her father’s ritual of hiding the family’s books. The Taliban were searching houses for guns, televisions and nonreligious reading material, so he wrapped their cherished library in plastic, placed the bundle in an iron box and buried it under a mulberry tree in the backyard. As Qaderi’s grandfather said when he placed a volume of poetry atop the stack, “We haven’t survived this long so that we die now for a bundle of papers.”

For three years, Qaderi’s father unearthed the books every spring and spread them out to dry in the sunlight before returning them to their hiding place for another cycle of seasons. When he realized his daughter was a budding author, he switched locations, saying, “The girl who writes must read stories. I will hide the books in the cellar.”

Qaderi’s memoir, DANCING IN THE MOSQUE (HarperCollins, 224 pp., $26.99), is a stunning reminder that stories and words are what sustain us, even — and perhaps especially — under the most frightening circumstances. For Qaderi, those contraband volumes were an eye on the horizon, a reminder of liberties worth fighting for. “In the books taken from the underground box, there were no burqas,” she writes. “There was no girl given away to the city’s aged holy man, no beaten girl who threw herself down a well to avoid being stoned to death.”

Her own book, gracefully translated by Zaman S. Stanizai, alternates between stories of growing up in Afghanistan — “the land of a death foretold” — and missives to her son, Siawash, who was taken from her when he was 19 months old. Qaderi doesn’t delve into their separation until later chapters, so I’ll avoid specifics except to point out that a child of that age is a sentient human being, old enough to place a palm on each of his mother’s cheeks and say “Mine.”

As you read, you feel the weight of the 985 nights that mother and son have been apart; it’s the glue binding the spine you hold in your hands. (On a related note: The script font used for the letter sections may strain middle-aged eyes — a small price to pay for a window into her world.)

“Dancing in the Mosque” is heartbreaking, but it’s also alive with curiosity and subversive joy. Qaderi is a born rabble-rouser, which serves her well when the Taliban come to Herat, where she lives with three generations of her family. “Almost immediately, you could feel the change,” she writes. “Suddenly the streets were barren of women.”

When the Taliban halt education for girls, Qaderi turns her kitchen into a makeshift classroom; eventually she relocates to a tent that doubles as a mosque for refugees. There, she teaches reading and writing and indulges pupils in an occasional cautious dance party. When a guard comes to investigate the ruckus, Qaderi keeps a cool head, convincing him that the crowd isn’t breaking any of his stultifying rules. Still, she writes, “We were like mice, silent and nervous, hiding in the walls from a hungry cat that could pounce on us at any time.”

What’s most astonishing here is the ordinariness of Qaderi’s adolescence and early adulthood, even as the world seems to be crumbling around her. She bickers with her brother, keeps secrets from her parents, wonders when a boy will notice her, chafes against timid friends who call her “chick commander.” Of course, the stakes are unimaginably high. When Qaderi spurs rebellion, she’s not jeopardizing her phone or curfew; she’s putting her life on the line.

“Dancing in the Mosque” shows the evolution of a nimble writer whose courage has been honed by perspective and loss. Will her message reach its intended recipient? One can only hope. This bundle of papers is worth a risk nobody should have to take.

If you had to guess where Homeira Qaderi finds her strength, what would you say? (Family? Religion? The promise of education?)

This is a tough one, but here goes: Would you make the same choices Qaderi made, insofar as she had choices?

“The Last Girl,” by Nadia Murad with Jenna Krajeski. A Yazidi woman devastatingly describes her kidnapping from a small village in northern Iraq and her time as a sex slave to Islamic State militants. Like Qaderi, Murad illustrates how “normal” life can be overturned in an instant. Our reviewer wrote, “How to approach a memoir of a war still being waged?” The question applies to “Dancing in the Mosque.”

“Daring to Drive,” by Manal al-Sharif. Reading is a passport to freedom — and so is a car. In Saudi Arabia, al-Sharif led the charge to earn women the right to operate a motor vehicle. Her memoir tells the story of how she put herself behind the wheel in more ways than one.