‘I am My Own Subject’: Celia Paul on Lucian Freud, Motherhood and a Life in Art

“Pictures unpainted make the heart sick.” With this indelible line, the principal of the prestigious Slade School of Fine Art in London persuaded Bishop Geoffrey Paul to allow his talented teenage daughter to study there. Two years later, in 1978, Celia Paul met Lucian Freud, who was at Slade as a visiting tutor. She was 18; he was 55.

In her captivating memoir, “Self-Portrait,” Paul describes how her growing love for Freud seemed at first to denude her of ambition. She stopped washing her clothes and brushing her hair. Her work became “slack and halfhearted”; she kept wiping away images, and felt “suffocated by the increasing debris of unfinished paintings.” Her heart was sick.

Paul and Freud were lovers for 10 years, and in 1984 she gave birth to their son, Frank. By the time the philandering Freud died in 2011, he had at least 14 offspring that he acknowledged as his own; The Times’s obituary played it safe by specifying only that there were “many.”

Freud was by turns domineering and caring, encouraging about Paul’s paintings while doing what he could to stop her from making them. He was fanatical about his own time, famously punishing portrait sitters who deigned to arrive late, but he would keep Paul waiting for his arrival or even — because he refused to give her his number — just a phone call. Freud would speak enviously of how Rodin had convinced his lover Camille Claudel to give herself over to becoming a muse, and how hurt Rodin was when he no longer had complete control over her. 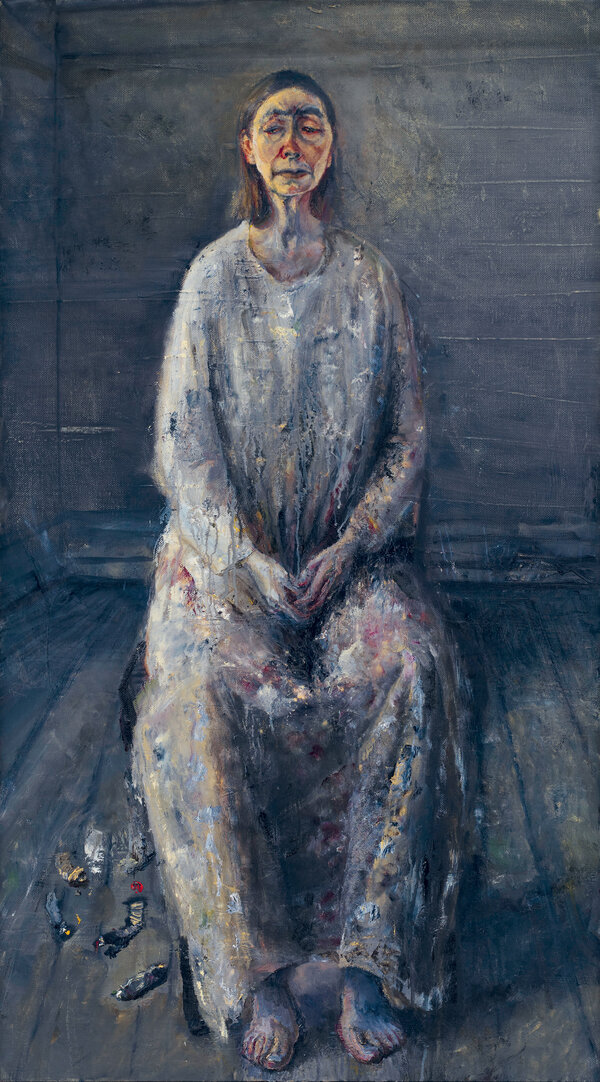 “Self-Portrait” is Paul’s account of her life and her work — or, more precisely, of her attempts to realize the possibilities of each despite the constraints thrown up by the other. She left Frank with her mother in Cambridge when he was an infant. When Paul spends time with him, she says, “I don’t have any thoughts for myself.” She lives separately from her current husband, who doesn’t have a key to her flat.

Paul writes about her struggle to love someone while dedicating herself to her painting, explaining in her prologue that she hopes her book will “speak to young women artists — and perhaps to all women — who will no doubt face this challenge in their lives at some time and will have to resolve this conflict in their own ways.” But this makes her mesmerizing book sound more helpful than it is, or than it needs to be; “Self-Portrait” is less tidy and more surprising than such a potted purpose would allow.

When Paul first met Freud she noticed how pale and waxy his skin was, with an “eerie glow” that looked “like a candle inside a turnip.” (Her metaphors are often startling in their cool specificity.) His initial attempts to seduce her made her feel “hemmed in.” His apartment smelled of rotting fruit and food scraps. “I watched him kissing me and my mouth was unresponsive,” she writes. “I was frightened.”

It was only later in their relationship that Paul describes anything resembling pleasure. Still, aside from some ghostly charcoal sketches she made while he slept, she wasn’t able to paint him. “Although I was Lucian’s subject, he wasn’t mine,” she writes. The first time she sat for him, she cried. She lay naked, and self-consciously pushed her hand to her breast; he told her to hold the pose, even though it was excruciating for her: “I felt like I was at the doctor’s, or in hospital, or in the morgue.”

She recalls all of this precisely, without anger. When Paul learned about Freud’s other affairs, she swallowed a handful of painkillers and chased them with a bottle of whiskey. “This landed me in the hospital,” she writes. “I went home to recover.” Paul’s powers of observation are keen and often ruthless, but she never resorts to the language of self-pity — even when a reader might expect her to. “Self-Portrait” reveals an abjection that declines to announce itself as such.

Pages of this book are given over to notebook entries she kept decades ago, describing her painting practice with a moving, almost painful, immediacy. She would envy Freud in his soundproof studio while she suffered a noisy apartment and had to wear earplugs, “trying to block out the din so that one poor struggling thought might swim through.” If only she could get the solitude and quiet she needed, her next painting promised to be great. “There is a creativity working in me like worms in sand.”

Unlike the hard, clinical gaze of Freud’s work, Paul’s portraits are radiant with intimacy. The child of missionaries, she has always been attracted, she says, to the “juxtaposition of the mystical with direct observation.” “Self-Portrait” includes lush, full-color reproductions of numerous paintings — Freud’s as well as hers. Paul’s main subjects have been her four sisters and their mother, when she was alive. “The act of sitting is not a passive one,” Paul writes. Her mother would use the time for prayer. In one painting, “My Mother with a Ring,” her mother looks off into the distance as if she’s waiting for something, her eyes gleaming as they catch the light.

The arc of Paul’s story is not one of triumph, but endurance. “I felt that time itself was like water, a powerful current that had dragged my mother away and that was also pulling me in the same direction,” she writes. “There was some comfort for me in this thought.” A self-portrait she painted after Freud’s death was done as both homage and severance. Like a painting he did of her, it’s titled “Painter and Model” because now, she writes, “I am my own subject.”