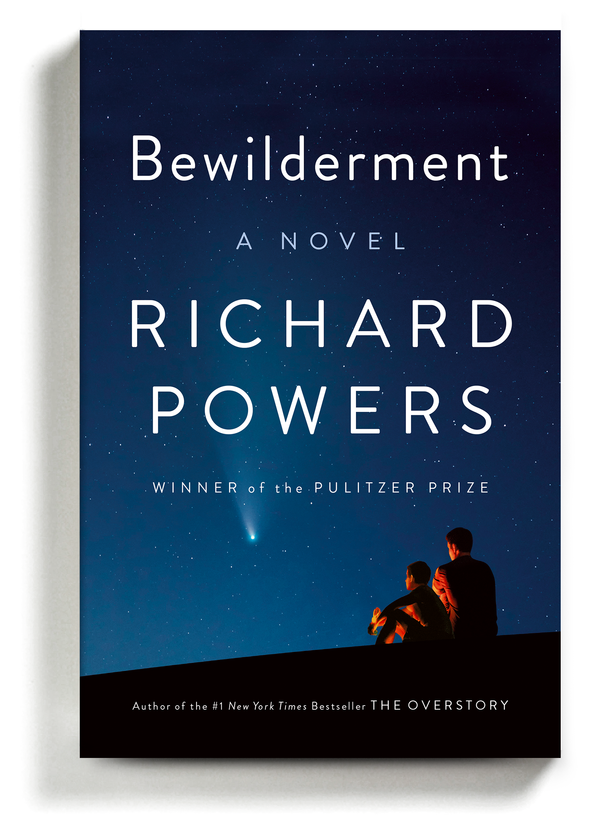 “The world had enough novels,” Richard Powers wrote in “Galatea 2.2,” his semi-autobiographical and arguably best novel, published in 1995. “Certain writers were best paid to keep their fields out of production.”

Among those writers, a quarter of a century later, may be Powers himself. His new one, “Bewilderment,” is so meek, saccharine and overweening in its piety about nature that even a teaspoon of it numbs the mind.

“Bewilderment” is the follow-up to “The Overstory” (2018), his beloved novel about trees, the importance of maintaining forests and people, in that order. It won a Pulitzer Prize and made Powers something close to a secular saint. Let no one say it was overrated.

“The Overstory” was seen to be improving and educational and concerned, like the magazines — Mindful, Rock and Ice, Naked Food, Dwell, Runner’s World, Yoga — on display at Whole Foods, and thus healthy to be observed carrying around.

Good novels are rarely built on good intentions or politics. Pauline Kael said it about film, and it applies more so to novels: “the good ones never make you feel virtuous.”

Young Robin is bright and sweet but compulsive and quick to anger. When a pediatrician suggests he might be “on the spectrum,” his father thinks: “I wanted to tell the man that everyone alive on this fluke little planet was on the spectrum. That’s what a spectrum is.”

Robin’s about to be expelled from third grade for impulsively clouting a boy in the face. Theo doesn’t want to put him on Ritalin or other psychoactive drugs.

Vanguard science and technology are often tucked into Powers’s novels like the B inside a B.L.T. In “Bewilderment,” the crisp educational component arrives in the form of experimental neurofeedback treatments, their promise and peril.

These treatments involve brain scans and suggested emotional states and the potential to gently sync minds with other minds, even across time. Alyssa took part in one such experiment before her death, and her “patterns of connectivity” are on file. Might it help Robin to be able to sync up with these?

One of Alyssa’s suggested states was “ecstasy,” and she hit that one out of the park. Powers doesn’t begin to explore the Oedipal implications when Robin steps into her head.

The medical science described in “Bewilderment” is really interesting, in the manner of a New Yorker article. As fiction, the novel is D.O.A. — shallowness that requests to be taken seriously.

The rap against Powers’s novels used to be that they were chilly. Margaret Atwood, summing up the complaints, once said the idea was that he was “not cozy enough at the core.”

“Bewilderment” isn’t cozy, exactly, but it’s got a nubbly sentimentality. Theo and Robin bond while they are walking in, and talking about, nature. It’s Trump’s world out there, and the cork has popped off the shaken bottle of fizzy swill.

The novel’s central question is the same one posed in “The Overstory” by Douggie Pavlicek, a Vietnam War vet turned eco-warrior: “What the [Expletive] Went Wrong With Mankind?”

The dialogue distantly reminded me of that in my own favorite novel from third grade, Richard Bach’s “Jonathan Livingston Seagull.”

Robbie speaks in italics throughout, as if he were an oracle or, like the baby in “Who’s Afraid of Virginia Woolf?,” imaginary. “Don’t worry, Dad. We might not figure it out. But Earth will,” he says. And: “Spring will keep coming back, whatever happens. Right, Dad?” And: “New planet, Dad. Please.” And: “There’s something wrong with us, Dad.”

Robin adds, M. Night Shyamalanishly: “Your wife loves you. You know that, right?”

Theo says to him, “People, Robbie. They’re a questionable species.” He thinks: “There was a planet that couldn’t figure out where everyone was. It died of loneliness.” And: “Oh, this planet was a good one.”

To be fair to Powers, he retains an ability to alchemize the strangeness of everyday global life — on paying a cabdriver, for example: “I fed my card into the cab’s reader and credits poured out from a server farm nestled in the melting tundra of northern Sweden into the cabbie’s virtual hands.” But these moments are rare here.

There are some books you want to give to your best friend; this is one to give to your distant aunt, for her reading group. It’s a James Taylor song when you require a buzz-saw guitar. There’s no impudence, no wit, no fire and little fluttering understanding, despite the ostentatious science, of how human minds really work.

It’s a book about ecological salvation that somehow makes you want to flick an otter on the back of the head, for no good reason at all.