In Brazil, a New Rendering of a Literary Giant Makes Waves

So the 29-year-old, who lives in Bauru, was shocked to see a new image of Machado that has gone viral in the country. It shows him with chocolate-brown skin, considerably darker than how he appears in the black-and-white photograph that appears on virtually all of his books and hangs prominently in the Brazilian Academy of Letters.

“I always imagined him as white because this is the default image of most writers,” Martins said. “I am certain that if the skin color of an author so important was at the very least discussed during my experience at school, my black friends would have felt more represented.”

Among Brazilian writers, Machado, who lived from 1839 to 1908, inhabits a unique position. “Dom Casmurro,” his 1899 masterpiece about cuckoldry and jealousy, is required reading at some schools around the country. His name has been lent to streets and subway stops across Brazil. Susan Sontag called him “the greatest writer ever produced in Latin America,” and others have compared him to Flaubert, Kafka, Henry James and Alice Munro.

[ “The Collected Stories of Machado de Assis,” one of the Times critics’ top books of 2018, “reveals the arc of Machado’s career, from the straightforward love stories to the cerebral and unpredictable later works.” ]

The traditional historical photo of him shows a man whose skin is nearly as light as his crisp white dress shirt. But a new project, developed by the São Paulo office of the advertising agency Grey and São Paulo’s University Zumbi dos Palmares, a predominantly black university, re-creates that photo in a way that the project’s leaders say more accurately reflects what Machado looked like.

Machado was known to be the descendant of freed slaves, but the new rendering, which shows him as a black man, has shaken Brazilians, prompting some to reconsider how they previously read his work and angering others who feel his legacy had been whitewashed. 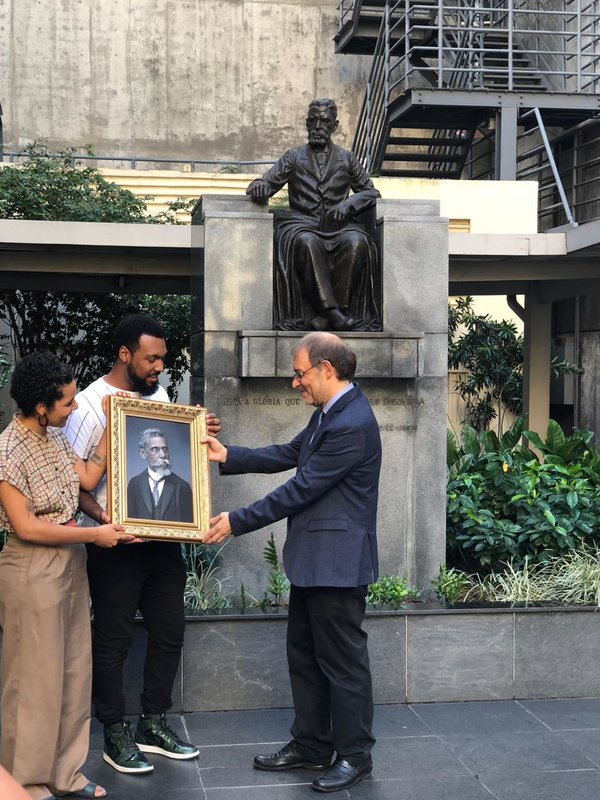 “Machado de Assis was basically turned into a blond guy with blue eyes,” said José Vicente, the founder and director of the University Zumbi dos Palmares, named for the 17th-century leader of a Brazilian slave rebellion.

His school is leading the project as part of an effort to “reconstruct these black people from Brazilian history who over time became whitened or had their work forgotten,” he said. “I think this project shows just how deep and powerful racism can be, but also the importance and necessity of recognizing black culture not just for the black community, but for all humanity. I think it’s necessary for our country — Brazil — to know itself.”

The university worked with Grey, who contracted historians to ensure the accuracy of the image and then managed the marketing and rollout of the project. Called Machado de Assis Real (The Real Machado de Assis), it encourages readers to download and print the new image and features posts on Instagram of students pasting it on top of existing ones in their books, along with the hashtag #machadodeassisreal.

The next goal, said Adriano Matos, chief creative officer at Grey, is to replace Machado’s portrait at the Brazilian Academy of Letters, of which the novelist was the founding president. The academy’s current president met with project leaders in May to receive the new portrait, which now hangs in the academy.

Matos hopes that publishers will begin to use the new image on book covers. “Our goal is that one day you can go onto Google image search and only see images of Machado de Assis as a black man,” he said.

At least one small Brazilian publisher, Mâle, has committed to publishing Machado’s work with the new portrait. Publishing houses in the United States, like the Norton imprint Liveright, which publishes the author’s works in translation, said they had not heard of the project but would be open to considering a new portrait.

It isn’t clear how or why Machado’s image was lightened. Machado scholars like G. Reginald Daniel, a sociology professor at the University of California at Santa Barbara, said that in 19th-century Brazil, Machado's publishers “would have totally wanted him white to sell. For people to see this great author as of African descent would have been very troubling for many.”

“He was celebrated during a period of Brazilian society where to be recognized and valued you had to be white,” Matos said. “He would have never been taken seriously, and never achieved commercial success, if people had known his true racial identity. He would have been a failure if he had been known as black.”

But some of those most familiar with Machado’s life are ambivalent about the push to identify him as black. Daniel, who wrote a book exploring Machado’s mixed-race identity, said that while he commended the efforts to “re-racialize” him, “the real Machado de Assis was not a black man but mixed. Portraying him otherwise misses the duality and in-between experience he had as a biracial man.”

There may be a generational aspect at play in the re-imagination of Machado fostered by the project. Some older Brazilians are more aware of the writer’s racial identity, while younger ones, who weren’t taught about it in school, are not. For black students involved in the project, like Mayra Salles, it is an effort to change how future generations of black Brazilians consider themselves.

“My hope is that people like me won’t have to deny or erase the color of their skin,” said Salles, 26, a Zumbi university student who is also interning at Grey. “This project is an alert to the world: We are here and we won’t take any step back. We are preparing ourselves to no longer tolerate the violence and discrimination that comes from racism.”