In ‘Siege: Trump Under Fire,’ Michael Wolff Chats With Steve Bannon While the Establishment Burns

You might think that Michael Wolff, whose blockbuster “Fire and Fury” wasn’t exactly a glowing portrait of President Trump’s first year in the White House, might have burned so many bridges that a second insider book on the administration would have been an impossible task.

But it’s not as if the Trump team became more disciplined and tight-lipped in its second year. As Wolff explains in “Siege,” a number of the people who helped him on the first book have left the administration but are still in on the gossip loop, joining Wolff in what he calls “my train-wreck fascination with Trump — that certain knowledge that in the end he will destroy himself.”

One of these people is Stephen K. Bannon, who gets pride of place in Wolff’s acknowledgments, thanked for “his trust and cooperation” as “the Virgil anyone might be lucky to have as a guide for a descent into Trumpworld.” Wolff says “it is a measure of Bannon’s character that he stood by his remarks in ‘Fire and Fury’ without complaint, quibbles or hurt feelings.”

This is a strangely effusive measure of gratitude for Bannon, whom Wolff calls “the man arguably most responsible” for Trump’s presidency. After all, Bannon isn’t exactly known for holding traditional values like “character” and “trust and cooperation” in much esteem.

“Siege” is ostensibly about Trump — portrayed here as a very unstable non-genius cracking under the pressure of being thrust into the highest office — but its guiding worldview looks remarkably like Bannon’s. It’s a mordant, readable tell-all designed to show how Trump, simply by being Trump, has made himself the perfect wrecking ball, blasting holes through an array of institutions.

There are salacious details in this book — many of which Trump’s critics will want to eat up — though with so many unnamed sources, Trump’s compulsion for hyperbole and Wolff’s own journalistic record, it’s hard to know which tidbits to trust. It makes more sense to read “Siege” less as a news report and more as a rhetorical gambit — a twisted bid to burnish Bannon’s anti-establishment legacy.

“Siege” begins in February 2018, and takes us up to the delivery of the Mueller report this past March. Leaked information about the book has homed in on Wolff’s claim that the Mueller team, back in March 2018, drafted a proposed indictment of the president — an assertion that a spokesman for the special counsel has already denied. 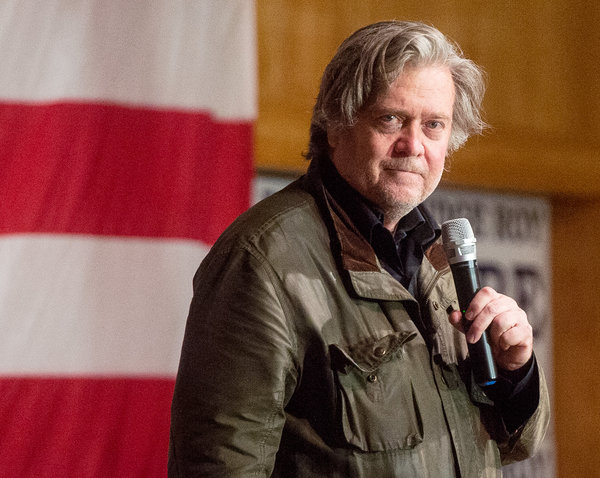 For anyone eager to relive the last year, Wolff tracks the scandals (or the major ones, at least — who can count?) in all their bewildering abasement. A sampler: There’s Stormy Daniels’s lawsuit. There’s Trump’s insistence that he could, if he needed to, pardon himself. There’s Melania’s mysterious hospitalization (Wolff doesn’t seem to know why she was hospitalized either). There’s the murder of the journalist Jamal Khashoggi in the Saudi Embassy in Istanbul, and Jared Kushner “in an off-the-record conversation with a reporter” trying to defend the Saudis by disparaging Khashoggi as a “terrorist.”

Kushner comes across in this account as perhaps the saddest figure of all: a hapless schemer. Wolff says that Kushner failed to pass the normal security clearances, and was granted a reprieve only when Trump intervened (calling this assertion “a fact baldly denied by Kushner and his wife”). The Kushner family’s byzantine real estate troubles were, Wolff says, mysteriously solved once a Toronto-based investment firm that worked with a number of sovereign wealth funds stepped in to bail Kushner out. Wolff has Kushner petitioning Henry Kissinger for his advice on international affairs, even floating the suggestion of Kissinger as Trump’s secretary of state soon after the 2016 election; at the time, Kissinger was already 94 years old.

Wolff says that Kushner represents “liberal globalism,” though he doesn’t offer much to back it up, instead repeating Bannon’s pet theory that Kushner’s behavior shows how glaringly hypocritical the “true and deeply self-interested face of liberal globalism” actually was. Against this, Bannon positions his own “party of the peasants,” with their “peasant honesty, peasant wisdom and peasant loyalty,” prompting Wolff to make what is either a deeply ironic or inadvertently hilarious comparison of Bannon to Tolstoy.

The political analysis in this book is close to nil, but that’s by design. “The heart of this book,” Wolff says, is the experience of the Trump presidency: “an emotional state rather than a political state.” Policies, decision-making, anything that requires even a minimal amount of attention to detail — that happens, as much as possible, without Trump, Wolff says. The president’s staff sees it as their job to keep him in his “bubble,” munching candy bars at night and getting his ego stroked in marathon phone calls with the Fox News host Sean Hannity. On good days, Wolff writes, the president arrives late to the office and is whisked through a series of staged, anodyne meetings to keep him busy: “A distracted Trump was a happy Trump.”

Bannon, meanwhile, even having left the White House in 2017, clearly maintains some connections to it, gleefully watching the chaos from the sidelines and appearing before the special counsel five times — or possibly eight, Wolff says, according to some whispers from “Bannon enemies.” Bannon seems comfortable expressing contempt for pretty much everyone — not least the president he helped elect into office. (Though Bannon does declare a measure of respect for Vladimir V. Putin — “a badass” — and, in what might be the most truly shocking turn in the book, Nancy Pelosi, for disinviting Trump from delivering the State of the Union in January and thereby insulting him in the language he most viscerally understands: humiliation. “She crushed this [expletive],” Bannon marvels.)

“Siege” reads like a 300-page taunt of the president — from Wolff or from Bannon, though they seem to have arrived at the kind of collaboration in which the distinction doesn’t really matter. In the afterword to the paperback edition of “Fire and Fury,” Wolff bragged about how he “did an end run around the system, catching the journalism apparatus as well as the White House unawares,” deriding the “journalism bureaucracy” for putting so much stock in such niceties as confidentiality and integrity.

So now Wolff gets another probable best seller, and Bannon, who boasts about communicating with Trump through the media, gets to show the president who’s really boss. “Bannon believed he was the man of populist destiny and not Donald Trump,” Wolff writes, with Bannon even entertaining the idea of being a presidential contender in 2020. Bannon might wax sentimental about the country’s white working class — whom he lovingly calls “deplorables” — but he treats them as endlessly credulous, riling them up with stories about immigrant caravans and the boons of a trade war while offering them nothing more concrete than the fireworks display of watching the establishment burn.

Wolff describes Bannon staying in a $4,500-a-night hotel suite in London — not quite the typical peasant digs, but Bannon thinks like a hedge fund guy even as he rails against them. By the same token, Trump’s misfortune might well turn out to be Bannon’s opportunity. As Bannon tells Wolff, in a rambling, five-page monologue: “I’ll cover myself on the downside.”