Iola Mathews is an honourable thief. There is a wonderful picture in Winning for Women of her 1994 ACTU farewell after a decade working with its secretary Bill Kelty, fighting for women's rights at work. 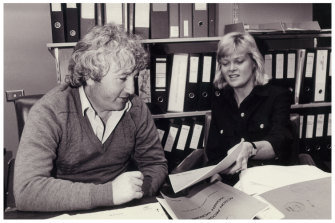 The poised Mathews smiles standing next to Kelty in what looks like his best cable-knit jumper, his luxuriant white hair coiffed to its merino best. Beaming she may be, but her mind was probably already mulling the heist.

For Mathews later asked where the ACTU archives ended up. "Some obscure place in Canberra," she was told. Since not everyone there valued her work as much as Kelty, she wondered whether her papers would ever make it.

"So one Sunday I came in and quietly removed it all, and took it home, and put it in the garage," she said. "And it sat there for 25 years until a few years ago when I thought, I'd better (write it all down) before I lose all my marbles … and show young women that a lot has changed, even though sometimes they think it hasn't."

Mathews' heist is history's gain. Winning for Women is a vital repository of first-hand labour history, gender history and media history recounted in detail by a principal in the action. It is a masterclass in social change and how the industrial side of it gets done. 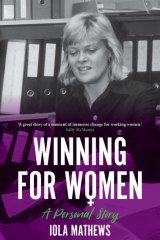 The first half conveys Mathews' life until the ACTU, and the second a detailed account of the campaigns and arbitration commission cases she then worked on, and eventually led, helping reverse the then pervasive legal discrimination against women workers.

Iola Hack was born to a lawyer father and "homemaker" mother in middle-class Melbourne. An arts degree and overseas work and travel led to a cadetship at The Age in 1969, a time when most journalists and all of their bosses were men, some helpful, some not.

It was like pushing on a door prone to sticking. She mostly thrived and built a formidable network, especially on the education round, in which young mothers such as Joan Kirner were galvanised into action over the overcrowded state schools their children attended.

Hack married Race Mathews, taking the opportunity to drop what was a particularly unfortunate surname for a journalist. Race was a Whitlam staffer on his way into politics. He was also a widower with three children, to which he and Iola quickly added two more. With Race mostly absent from home, Iola's journalistic career staggered under the weight of effectively being a single mother of five in a society without a childcare system.

Race's ascension to Victorian Labor premier John Cain's cabinet in 1982 delivered the killing blow to Iola's journalistic career. Age editor Creighton Burns sidelined her, suggesting that she might still be allowed to "do some kind of research, like checking things for the subs". She was devastated. "What a joke. Would they ask me, between beers, to look up how to spell Mississippi?"

Mathews resigned and then felt the full impact of the double bind she was in, shut out of many suitable jobs because Cain did not want a minister's wife on the public service payroll.

Things were complicated, and often fraught, even among people with shared feminist goals.

The odd bit of work came Mathews' way but mostly she was involved in voluntary feminist organising and activism. The plethora of names and details of the machinations around feminist action at this time is a real feature of the book. Things were complicated, and often fraught, even among people with shared feminist goals – and that was before one faced their implacable opponents.

Kelty emerges as modern Australian trade unionism's unsung feminist hero. He recruited Mathews to the ACTU in 1984 and set her to work on achieving the industrial side of a shared feminist agenda with the Hawke and Keating governments that fixed so many workplace wrongs for women.

Not all the colleagues were on board. Mathews helpfully names those in the labour movement who were as she helped win equal pay for nurses and outworkers, parental leave and superannuation, as well as running key equal pay cases during a stellar decade. Change can be achieved. Mathews here shows how.

Chris Wallace is a historian at the ANU in Canberra. @c_s_wallace