‘It Will Always Be a Part of My Life’: Chanel Miller Is Ready to Talk

SAN FRANCISCO — Until recently, when friends came to Chanel Miller’s apartment, she would throw a bag over the Glamour Woman of the Year award that she received in 2016.

It was given to Emily Doe, the name that identified her during the 2016 trial of Brock Turner, the Stanford University student charged with sexually assaulting her. He was found guilty, and at his sentencing hearing, she read a victim impact statement that would later be published on BuzzFeed and read aloud on CNN and the floor of Congress, stoking outrage that preceded the broader #MeToo movement.

But while millions of people read or heard her words, many in Ms. Miller’s life didn’t know she was Emily Doe until The New York Times reported it this month.

“It let me have a life in which this never happened,” she said of her decision to keep the assault and trial hidden. She wanted a chance to define herself, she said, beyond “the nameless, faceless, half-naked body from this case.”

“Know My Name,” her memoir coming out Sept. 24, chronicles how she has tried to make sense of what happened and how it changed her life. She fleshes out her story beyond being a victim — although she does write unflinchingly of the indignities she endured after the assault, including an hourslong exam at the hospital to collect physical evidence for a rape kit. Fourteen people saw her unclothed and unconscious; even more saw pictures of her that way in court.

“There’s no sense of boundaries,” Ms. Miller, 27, said. The scrutiny of the case often felt profoundly invasive, and when it ended, she felt discarded by the authorities involved. “They just sort of say, ‘All right, it’s over. Go back to your life.’ And you step out and you say, ‘What life?’” 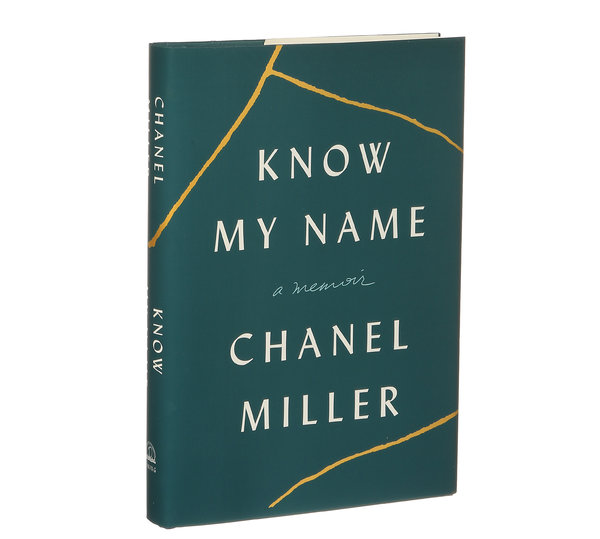 ‘I had no headline’

On Jan. 17, 2015, Chanel Miller was seven months out of college and working at an educational technology start-up when she decided to accompany her younger sister to a Stanford fraternity party. She remembers going, having some drinks and, hours later, regaining consciousness in the hospital.

What happened in between she pieced together primarily from news reports. She was found unconscious behind a dumpster with Mr. Turner on top of her, she said, by two graduate students who intervened and held Mr. Turner until the authorities arrived. He was arrested and later charged with three counts of felony sexual assault.

The trial began in March 2016 and captivated the public, with headlines often describing Mr. Turner as the “Stanford swimmer.” “It had a prestigious university, it had an Olympic hopeful, an athlete, heroes who stepped in,” said Alaleh Kianerci, the district attorney who represented Ms. Miller in court. “I just really tried to make sure that Chanel didn’t get too caught up in that.”

But it seemed unavoidable. “I remember thinking, after reading the news about him, that I wished I had more extracurriculars,” Ms. Miller said. “The fact that I had no headline, it was just so clear to me that I was nobody.”

Later in March, Mr. Turner was convicted of the three charges and faced up to 14 years in prison. In June 2016, however, the presiding judge, Aaron Persky, sentenced him to a mere six months in county jail, of which he served three. Mr. Turner lost his swimming scholarship at Stanford and registered as a sex offender. Through his attorney, he declined to comment.

Judge Persky’s sentence prompted a backlash, with many criticizing it as too lenient. Voters recalled him in 2018, the first such action against a California judge in decades. He declined to comment.

‘Shame grows when it’s in a contained space’

In the year between the assault and the trial, Ms. Miller alternated between panic attacks, dissociation and “exploding with rage.” She eventually quit her job and moved across the country, first to Rhode Island for an art program and then to Philadelphia to live with her boyfriend. She tried to distract herself by trying new experiences, like stand-up comedy and scuba diving.

She wrote her statement at a moment she felt particularly worn-down by the trial, after she learned the probation officer on the case had twisted her words to recommend a moderate county-jail sentence for Mr. Turner and, adding insult to injury, misidentified her as white (she is half Chinese).

Incensed, she decided that her statement “would no longer be a sad journal entry about my feelings. My DA had asked me to address the judge directly, but I would speak directly to Brock,” she writes in the book.

Her letter addressed him starting with the second sentence: “You don’t know me, but you’ve been inside me, and that’s why we’re here today.”

“I’ve read dozens of these letters,” said Ms. Kianerci, the district attorney, “but hers was different. She has an incredible ability to describe in excruciating and vivid detail what victims go through.”

Her statement went viral, yet most in her life remained unaware of the trial, something she now thinks may have stalled her recovery. “Shame grows when it’s in a contained space,” she said. “As soon as you let a little bit of air in, the shame loses its power.”

Women across the country sent her letters of support. California Gov. Jerry Brown signed a bill that imposed mandatory minimum sentences in sexual assault cases. Her words were used to make sure “no future Brock Turners get a slap on the wrist,” said Ms. Kianerci.

Ms. Miller began working with a therapist, disclosing that she had been sexually assaulted. The therapist, unaware Ms. Miller was the victim in the Stanford case, urged her to read the statement that so many people were sharing online.

‘People who love you want to suffer with you’

Philippa Brophy, a literary agent, had already read Ms. Miller’s statement when a mutual family friend told her Ms. Miller was interested in writing a book. Ms. Brophy went to Andrea Schulz, the editor in chief of Viking, who promptly snatched up the proposal.

Ms. Miller often wrote between the hours of midnight and 7 a.m., when she felt comforted knowing that loved ones were sleeping and she could be “completely honest with how I’m feeling and not have to worry about protecting other people.”

In an interview late last month, she mentioned the movie “The Farewell,” in which a Chinese-American character, played by Awkwafina, avoids discussing her grandmother’s terminal cancer with her. Ms. Miller said she tried to do the same with her family and friends, putting on a brave face to shield them from her pain.

“An incredible thing I’ve learned is the people who love you want to suffer with you,” she said. “I spent so much energy trying to protect them from everything, when the whole time, they really did just want to be beside me, weathering the storm.”

A college friend, Alison Green, said the news that Ms. Miller was Emily Doe “completely took my breath away.” She recalled reading her impact letter. “It’s so strange to think that this whole time it was Chanel,” she said, “because her words changed me without even knowing they were her words.”

Ms. Miller credited the #MeToo movement and the many women coming forward as “the reason why I feel like I can come out now.”

She and Ms. Schulz, her editor, spoke to each other weekly while they worked on the book. “I kept hearing in what was happening around us these echoes of the outrage that she had loosed, and the chorus of voices that joined in to hers to say, ‘This is happening to us, too,’” Ms. Schulz said.

‘I just figure out where it lives inside my life’

On a walk through her neighborhood in San Francisco, Ms. Miller stopped to examine a tree with white blossoms and an intoxicating scent. She circled it several times until she spotted a lime. “Wait, there’s no way a lime tree smells this good,” she said, inhaling deeply. At her apartment, she hummed in delight while eating dessert. She shared a joke from one of her old comedy sets and said she wanted to improve her Mandarin.

There is still trauma, she said, but what’s changing is “the time it takes for me to come back from it, and my ability to get on my own two feet each time it ambushes me again.” She frequently clenches her fist, a vestigial habit from the trial. Ms. Miller said she’s learned “to incorporate my body into all conversations.”

In 2014, a few weeks before Ms. Miller graduated from the University of California, Santa Barbara, a gunman killed six people nearby before taking his own life. Hearing the father of one of the victims speak at a vigil, Ms. Miller realized his ability to “so quickly convert his grief into action and articulation” was motivated by a desire to protect others from experiencing a similar pain.

Concepción de León is a staff writer covering news and culture for the Books section.