Big Sky signals the returns of Kate Atkinson’s world-weary ex-cop, ex-army private detective Jackson Brodie after a 10-year hiatus. He’s single, struggling to connect with his teenaged son, earning his living by following unfaithful husbands on behalf of their embittered wives, and worrying about things no one else seems to worry about, such as a girl with a sparkly unicorn backpack who seems too young to be hitchhiking on a busy road. 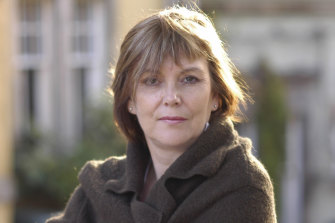 Kate Atkinson is interested in the relationship of law to justice and the moral dilemmas that follow.Credit:

Carefully structured and brilliantly stylish as any of Atkinson’s more celebrated literary novels, Big Sky is playfully reflexive about its own fiction-making, in lively conversation with its many antecedents from Agatha Christie to Scandinavian Noir, Raymond Chandler to Bram Stoker. The dilapidated seaside town of Whitby provides the setting, famous as the place where Count Dracula landed in Stoker’s novel.

The global movements of monsters and their victims work the other way here: bloodsucking creatures masquerading as respectable Englishmen lure women from Europe, Asia, all over the world, imprison them in a former nursing home and mental hospital — described as the model for the place where Dracula’s victim Renfield was incarcerated — then sell them into slavery.

World War II occupied Atkinson’s past three novels, including the acclaimed Life After Life (2013) and A God In Ruins (2015). A different but no less consequential war occupies her here. Towards the end, Jackson tends to the wounds of a group of brutalised women in a human-trafficking operation of terrifying scale. ‘‘The room did bear a resemblance to a war zone,’’ he observes. ‘‘One more battle in the war against women.’’

The novel opens with a bride being driven away from a wedding — ‘‘a quick getaway’’, she says — by someone we assume is her husband until they stop to admire the sunset. ‘‘It’s not what it looks like,’’ says the man, to an older couple who offer congratulations. The man turns out to be Jackson. He is helping a woman escape.

Nothing is what it looks like in this story of false appearances and dangerous misapprehensions, crowded with the suffering girls and warrior women beloved by Atkinson. There are women who adopt masks to survive, such as surgically enhanced Crystal, who hides her sharp mind behind false eyelashes, treated like a doll (‘‘and not in a good way’’, she observes), or sly Tatiana who pretends to be whatever men want her to be. 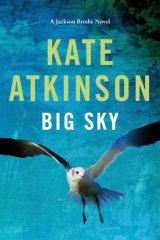 There are powerful men above the law who use charity as a perverse front for paedophile enterprises, including a solicitor/part-time slave trader who basically impersonates a responsible corporate family man, a monster in a human suit. Even Brutus the Rottweiler is a placid animal, nothing like the ferocious attack dog his owner wanted.

Women in need of a path to escape are everywhere here, trapped in badly judged engagements, bad marriages, addiction, deep historical trauma. Also: kidnapped, abused, bought and sold. In this brutal world Jackson is the self-appointed ‘‘sheriff’’, as he describes himself to Crystal. Like Chandler’s Philip Marlowe he is dedicated to the best of chivalric ideals, although he is a somewhat hapless hero.

It is so good to have him back, and also to see Reggie Chase, whom we last met as a fiercely determined teenager in When Will there be Good News? (2008), now a detective constable, still grumbly about Jackson’s interventions (although I admit that I miss Louise, the foul-mouthed detective from previous books who is clearly his soulmate).

The narrative is almost lazily uninterested in the one big murder in the middle of the story. Instead it excavates the inner lives of these characters whose fates intersect, and follows what happens when the false appearances unravel, when the truth of the past and the present is exposed. What will they do when they are threatened or confronted with horrifying reality? How far will they go to save others or themselves?

Like the best crime fiction, Atkinson is interested in the uneasy relationship of the law to justice and the moral dilemmas that result; Jackson and others characters too are forced to decide whether and how to take justice into their own hands, knowing the harsh limits of the legal system.

Atkinson’s mission is to humanise girls treated as worthless and expendable, ‘‘ciphers for the tabloid newspapers’’, even by police and others charged with caring for them. ‘‘These girls all had stories – lives, not stories’’, observes Jackson, ‘‘yet here they’d been reduced to anonymous commodities. The thought made his heart hurt.’’ He may be at times a shit sheriff but he is always a true, unflinching witness.