Long After the Bomb, Its Story Finds a New Audience

On Aug. 31, 1946, when The New Yorker published John Hersey’s “Hiroshima,” the 30,000-word article’s impact was instantaneous and global.

Hersey had managed to get into occupied Japan and reach Hiroshima, then still a smoldering ruin after being decimated by a 10,000-pound uranium bomb on Aug. 6, 1945. He interviewed blast survivors about what it had been like to be on the receiving end of nuclear attack. His was the first major press report revealing, in excruciating detail, the aftermath of the bombing.

Syndicated in newspapers around the world, “Hiroshima” was also released as a book almost immediately and translated into more than a dozen languages, including Spanish, Hebrew and Bengali. It sold out so quickly in Britain that the book’s publisher there had to rush a second printing of one million copies. “Hiroshima” has since sold millions more copies around the world and has never gone out of print in the United States.

As we learned when researching “Fallout: The Hiroshima Cover-Up and the Reporter Who Revealed It to the World,” one of the few places “Hiroshima” did not appear in the year after its initial publication was Russia. That changed this past August, when the independent Moscow publisher Individuum and the online publishing house Bookmate Originals released the first complete Russian translation of the book to commemorate the 75th anniversary of the bombing.

“There is no need to emphasize yet again just how powerful and influential this text is,” Felix Sandalov, Individuum’s editor in chief, said in an interview. “‘Hiroshima’ is a benchmark of journalistic nonfiction.”

Russian reviews of the newly released book have been favorable, several calling Hersey’s portrait of destruction innovative, restrained and evocative — and a possible model for writing effectively about nuclear catastrophes such as Chernobyl.

The praise is a far cry from the initial Soviet responses to Hersey’s reporting. In 1946, when “Hiroshima” was first published, American reporters correctly predicted that the Soviets would be hostile to his story and attempt to suppress it.

The Soviet government, which maintained an embassy in Tokyo during World War II, had seen the devastation in Hiroshima, even before the Americans. Just 10 days after the bombing, Soviet emissaries went to the city, where they took photos, retrieved rubble samples and human remains, and then reported to their leaders in Moscow about the apocalyptic conditions.

The Soviets believed that President Harry S. Truman had dropped atomic bombs on Japan to “show who was boss,” as the Soviet Foreign Minister V. M. Molotov later put it. The bombs, he stated in his memoir, “Molotov Remembers: Inside Kremlin Politics,” were “not aimed at Japan but rather at the Soviet Union.”

“They said, ‘Bear in mind you don’t have an atomic bomb and we do,’” he added, “and this is what the consequences will be like if you make the wrong move!” 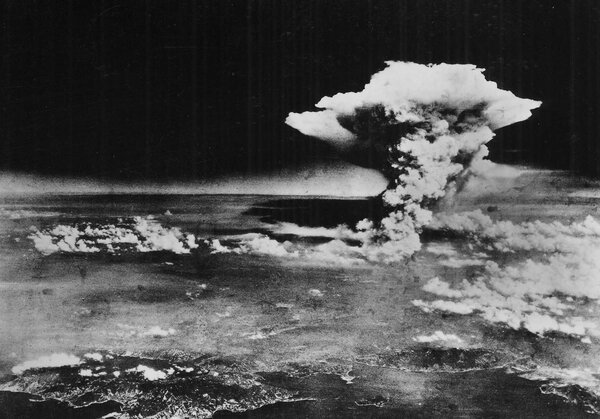 Soviet leaders understood that the Americans would have a monopoly on nuclear weapons for the foreseeable future and withheld from the Soviet population details about the bombings of Hiroshima and Nagasaki in an effort to downplay the United States’ military advantage. The Soviet government, which had begun to accelerate its own atomic development program after the United States successfully tested its first nuclear bomb on July 16, 1945, quickly forbade press accounts about the bombings and the might of the new American mega-weapon.

The United States government, in the meantime, had gone to great lengths to suppress information from its own citizens about the blast’s radioactive aftereffects, partly out of fear of undercutting its moral victory over Japan.

Archived communications among John Hersey and his editors, Harold Ross and William Shawn, show that The New Yorker realized that his reporting on Hiroshima and on the true nature of nuclear arms — namely that they were radioactive weapons that continued to kill long after detonation — would be taken by the Soviets as a propagandistic threat. Hersey knew Russia well, having founded Time magazine’s Moscow bureau in 1944. (“Not a word is written in Russia which is not a weapon,” he once observed.)

The Russians had once been more tolerant of Hersey, even permitting the publication of a Russian-language edition of his Pulitzer Prize-winning 1944 war novel, “A Bell for Adano.” (It contained an unflattering portrait of the United States, featuring a thinly disguised depiction of Gen. George S. Patton, whom Hersey had covered in Italy in 1943, as a deranged megalomaniac.) But after “Hiroshima” came out, Hersey’s relations with Russia turned icy.

Still, The New Yorker contacted the Soviet ambassador to the United Nations, Andrei Gromyko, to urge him to facilitate a translation of “Hiroshima” into Russian and get it distributed within the Soviet Union. The New Yorker’s cover letter to Gromyko went through many edits as Hersey and the editors struggled to find the right tenor: The New Yorker would even be willing to have the book translated for presentation “to your great people,” one draft stated. The United States’ own ambassador to the United Nations warned the magazine that pushing a Russian translation on Gromyko would be regarded “as making a threat toward Russia,” but in December 1946, The New Yorker submitted its entreaty to Gromyko anyway.

The letter was met with silence, and soon the extent of the Soviets’ hostility toward Hersey and “Hiroshima” became clear. Not long after Hersey’s own reporting trip to Japan, Oskar Kurganov, a journalist for Pravda, the official newspaper of the Soviet Communist Party, was dispatched to Japan. He wrote a report about Nagasaki downplaying the devastation and denying the existence of “atomic fever.”

American occupation officials were promoting a false story of decimation, he wrote; he claimed that he had interviewed a witness who had survived the blast merely by taking refuge in a ditch.

Hersey was also attacked directly in Pravda, which accused him of writing “Hiroshima” to spread panic and get rich in the process. Another Soviet publication called Hersey an American spy who embodied his country’s “military spirit” and had produced a “propaganda of aggression” akin to that perpetrated by the Nazis. News of these developments trickled back to The New Yorker, dousing the editors’ hopes of a Russian translation of “Hiroshima.”

In 1949, the Soviets successfully detonated their first atomic bomb, ending the United States’ nuclear monopoly — and arguably stripping Hersey’s “Hiroshima” of its perceived propagandistic menace. It remains unclear why it then took another 71 years for it to be published in its entirety in Russia.

“The book is highly relevant in today’s Russia,” said Mika Golubovsky, the editor in chief of Bookmate Originals. The “harsh militaristic rhetoric of many politicians and threats to reduce America to ‘radioactive ashes’ on national television — there are many reasons why people should read a book like ‘Hiroshima.’”

The phrase “radioactive ashes” refers to a statement made by the television anchor and Putin confidante Dmitry Kiselyov, who said on his weekly current affairs show in 2014 and again in 2016 that “Russia is the only country in the world that is realistically capable of turning the United States into radioactive ash.” As Putin accelerates the country’s nuclear program — including reported development of a hypersonic missile system — the prospect of a new arms race and a possible nuclear confrontation with America have once again become urgent topics there.

Lesley M. M. Blume is a journalist, historian and New York Times best-selling author, most recently of “Fallout: The Hiroshima Cover-Up and the Reporter Who Revealed It to the World.”

Anastasiya Osipova is an assistant professor at the University of Colorado, Boulder, where she teaches and writes on Soviet and post-Soviet culture. She was Blume’s research associate and Russian translator for “Fallout.”