Unhappily ever after: From The Very Hungry Caterpillar to The Cat In The Hat, many of our best loved children’s books were inspired by deep traumas in their authors’ personal lives 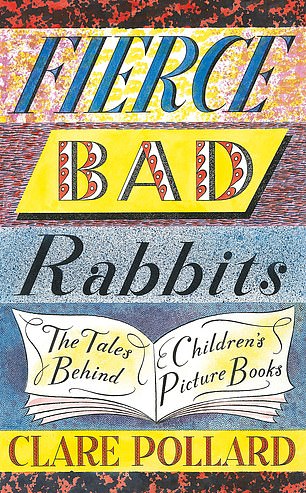 The Very Hungry Caterpillar by Eric Carle has sold the equivalent of a copy every minute since it was first published in 1969.

Small children and sleepy parents delight in the tale of the emerald green hero munching his way through one apple, two pears, three plums, four strawberries. . .

Carle had intended his caterpillar to proceed directly from his feast to his transformation into a beautiful butterfly.

‘But,’ said Carle, ‘my editor insisted that he suffer an episode of nausea first — that some punishment follow his supposed overeating. This disgusted me. It ran entirely contrary to the message of the book.

‘The caterpillar is, after all, hungry, as sometimes we all are. He has recognised an immense appetite within him and the experience transforms him, betters him. Including the punitive stomach ache ruined the effect.’

With a childhood blighted by World War II, Carle knew all about hunger. His German parents moved to America after World War I, where their son led a happy life in upstate New York until, aged six, his homesick mother made the catastrophic decision to take the family back to Stuttgart.

His strict new kindergarten teachers endeavoured to beat the free spirit out of the ‘American’ child with bamboo canes, and the Third Reich drafted his father into the army. He ended up spending eight years in a Russian PoW camp, returning home a broken man.

Young Eric was conscripted to dig trenches on the Siegfried Line, aged 15. ‘The first day there,’ he recalled, ‘three people were killed a few feet away. The nurses came and started crying.’

Carle was left with post-traumatic stress disorder (PTSD), which was still twitching through his fingers when he began playing with the idea of a book full of bullet-shaped holes. He thought of his friend, Herman, who had experienced near-starvation as an evacuee, and always felt his capitulation to the publishers’ request for a punished caterpillar betrayed him. 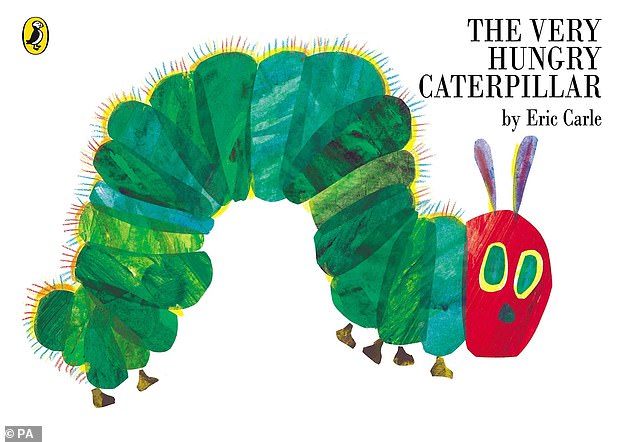 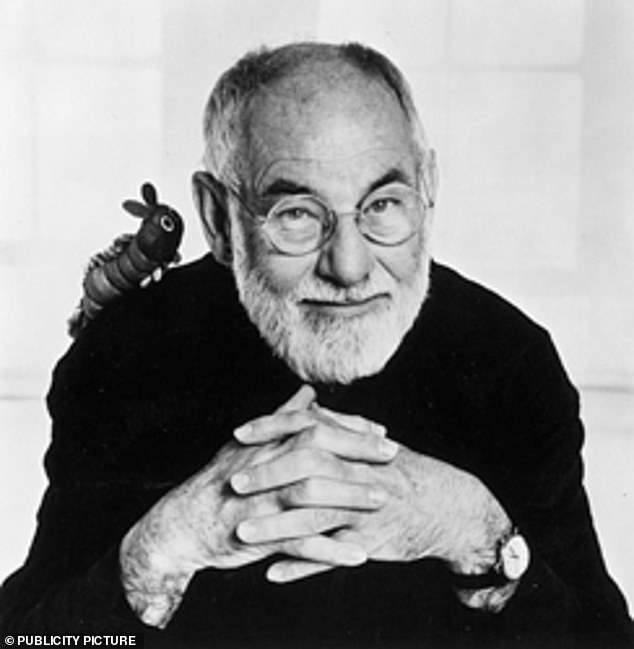 With a childhood blighted by World War II, Carle (pictured in 2005) knew all about hunger

In 2005, he admitted he still struggled to enjoy a good meal, ‘because of thinking about my father. I am left with a sadness. It might be psychobabble, but I rehash that period of my life through my books. The child I am helping might just be me.’

He’s not alone. According to poet Clare Pollard’s excellent book, most authors behind our best-loved picture books were working through some form of trauma.

Maurice Sendak (Where The Wild Things Are) had to hide his homosexuality from his parents. Raymond Briggs lost his schizophrenic wife to leukaemia shortly before he wrote The Snowman.

The first picture book written for children was the Orbis Sensualium Pictus (The Visible World In Pictures) by Jan Komensky, published in Nuremberg in 1658. The Bohemian priest had lost all his belongings to fire and all his family to the plague. He wandered as an exile for much of the Thirty Years’ War and, witnessing the suffering of the refugee children, wrote his book to help them learn the alphabet.

The book was so popular it was treasured a century later by a young Goethe.

All the early children’s books were instructional, but by the 19th century writers were exploring the psychology of childhood, such as Lewis Carroll through his tales of Alice In Wonderland. Born Charles Dodgson in 1832, Carroll, an Oxford mathematician, found a safe place to satirise the pomposity and privilege of the upper classes in his books. 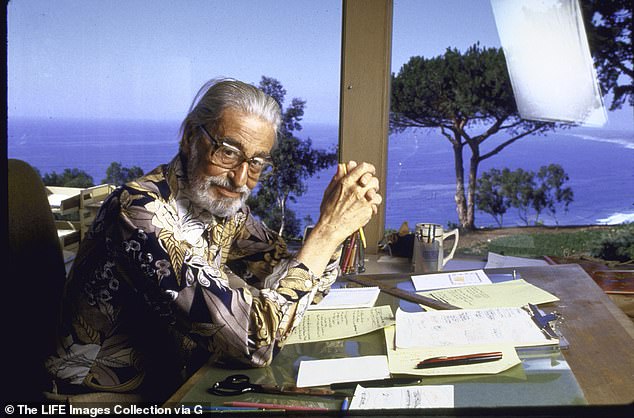 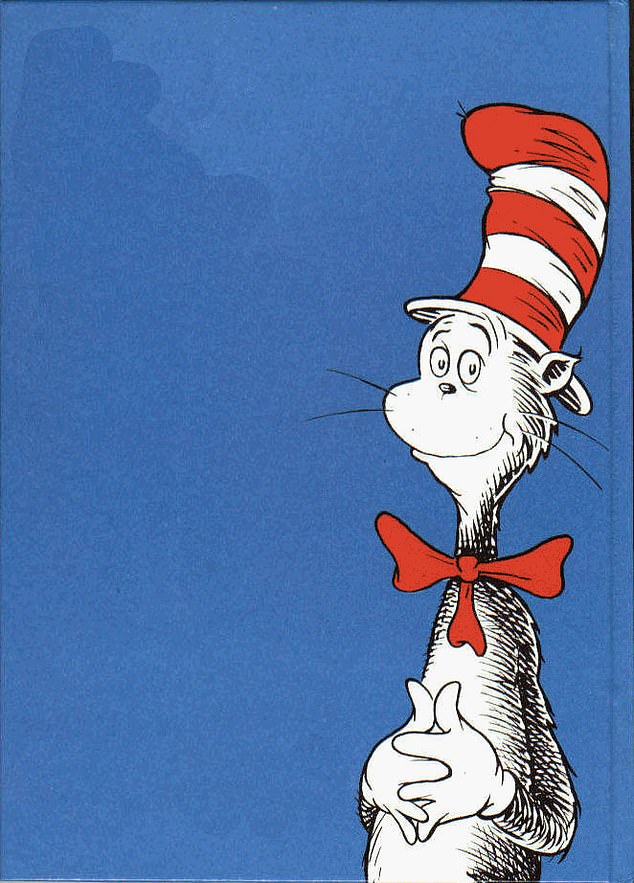 His Cat In The Hat books (pictured) were full of equally tiny words. Green Eggs And Ham uses only 50

Carroll never married and enjoyed the company of young girls — particularly his muse Alice Liddell, who he photographed naked. As Pollard says: ‘It is hard not to be discomfited by a letter that says: “One hardly sees why the lovely form of girls should ever be covered up.” ’

Illustrator Kate Greenaway — after whom the UK’s most influential children’s illustration prize is named — was also encouraged to strip her little girls naked by the Victorian critic John Ruskin.

He was fearful of the mature female form and, after seeing one of Greenaway’s illustrations in 1883, he begged the artist to ‘draw her for me without her hat — and without her shoes — (because of the heels) and without her mittens, and without her — frock and its frill? And let me see exactly how tall she is — and how — round.’

Beatrix Potter — whose first Peter Rabbit book was published in 1901, when she was 35 — went a different way, putting clothes on to animals. Although her creations have lives of wild adventure, Pollard reminds us that their author ‘spent most of her life a tamed thing, kept in dull, expensive isolation on the top floor of a house in South Kensington, without any friends her own age’.

Her father was an oppressive bully and her fiance died of leukaemia just one month after their engagement. 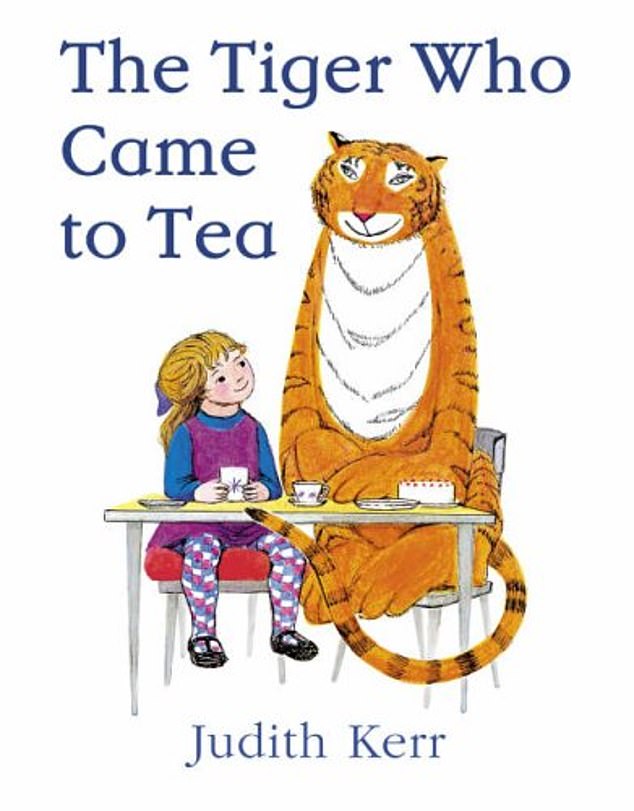 Not every picture book is autobiographical as many critics have tried to decode Judith Kerr’s 1968 classic, The Tiger Who Came To Tea (pictured)

Dr Seuss — born Theodor Seuss Geisel in Massachusetts in 1904 — lost an 18-month-old sister to pneumonia when he was three and never forgot the sight of her tiny casket. His Cat In The Hat books were full of equally tiny words. Green Eggs And Ham uses only 50.

His wife and collaborator, Helen, struggled with poor health for years, while Seuss had a long affair.

She took a fatal overdose of sodium pentobarbital in 1967. ‘Dear Ted, what has happened to us?’ she began her final letter to him, signing off with a private joke, the name of a fictional law firm, ‘Grimalkin, Drouberhannus, Knalbner and Fepp’. Seuss then wrote The Lorax, about a man who destroys his own world.

Britain’s most widely enjoyed picture book author, Julia Donaldson (The Gruffalo, Stick Man, Room On The Broom), had her own tragedy when her schizophrenic son Hamish stepped in front of a train, aged 25, in 2003. ‘Wired differently’ from birth, he was expelled from school at five and by 16 he had begun to hallucinate and talk in the rhyme his mother cherished. Pollard believes Donaldson’s book Tiddler, about a fish who tells wild tales, is about Hamish.

But not every picture book is autobiographical. Many critics have tried to decode Judith Kerr’s 1968 classic, The Tiger Who Came To Tea. Some say the tiger (who gobbles up all the food in the little heroine’s house) represents the Nazis, who drove Kerr’s family from their own home in Berlin in 1933.

But Kerr, who died aged 95 in May this year, reminds her readers that ‘sometimes a tiger is just a tiger’, and the little girl ends up hugging the creature.

‘I don’t think,’ she said, ‘one would snuggle the Gestapo, even subconsciously.’