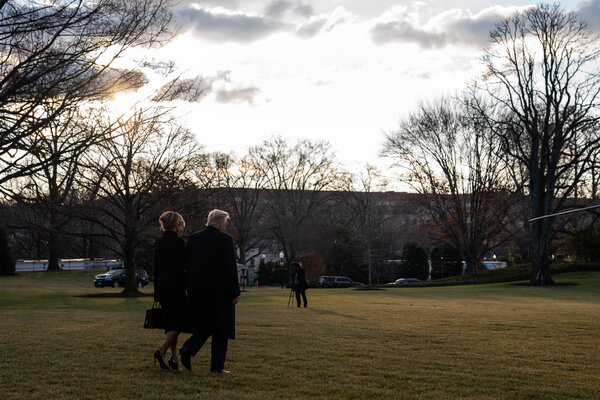 Forty-five years ago, when Bob Woodward and Carl Bernstein’s “The Final Days” came out, it was a different world: There was no cable news, no internet and no social media, and the political establishment offered at least the illusion of being in control. The Watergate scandal, culminating in Richard Nixon’s resignation, presented a riveting series of public events — hearings, trials and so on — but that left it open to Woodward and Bernstein to tell the story of what had been going on behind the scenes.

“Landslide: The Final Days of the Trump White House,” Michael Wolff’s third book about Donald Trump’s presidency, after “Fire and Fury” and “Siege,” faces a different challenge in recounting Trump’s political demise (for now). Penetrating a buttoned-up White House was not the issue, because Trump ran his administration as a public performance. Nixon spoke calmly in public and ranted and cursed to his aides. Trump put his self-pity, revenge fantasies and paranoia on full display at his rallies and in his tweets. He was indiscreet, and he surrounded himself with other indiscreet people, whom he often motivated to become especially indiscreet by humiliating or firing them. How can one lend an element of revelation to an account of the crazy, terrifying weeks between Election Day 2020 and President Biden’s inauguration?

Wolff’s method is essentially the same as in “The Final Days” and many other inside stories about highest-level politics: He uses lots of detailed off-the-record interviews with aides to produce a tale told in a third-person omniscient voice, without conventional journalistic attribution. I noticed only a time or two when he seemed to have put something that somebody had told him between quotation marks, with the person’s name attached. In books like this, the author adopts his sources’ perspective — narrowly, in the sense that they are shown behaving honorably, and broadly, in the sense that their overall take on events animates the story.

In an epilogue, Wolff interviews Trump himself, at Mar-a-Lago. It’s an artfully drawn scene of the king in exile, but the former president doesn’t really say anything he hasn’t said many times before — and indeed elsewhere in the book Wolff wisely chooses to quote several of Trump’s public speeches at length, because nothing else quite as fully captures his (to use Wolff’s term) “derangement.” Wolff’s main sources seem to be a group of aides at a second or third level of celebrity, people who see themselves as “political professionals.” Administration staff members like Jason Miller (communications adviser), Mark Meadows (White House chief of staff), Matthew Morgan (counsel to the re-election campaign) and Marc Short (Mike Pence’s chief of staff) appear often in Wolff’s accounts of White House meetings, usually attempting unsuccessfully to impose a measure of order and sanity. It seems safe to assume that it’s their collective point of view, and that of others like them, that we’re getting in “Landslide.”

Books like this usually burst out of the gate with a few newsmaking anecdotes, and Wolff does provide some of these. Trump believed that the Democratic Party’s elders would pull Biden, sure to lose, at the last minute, and replace him with a ticket of Andrew Cuomo and Michelle Obama. He toyed with the idea of using the pandemic as a pretext for indefinitely postponing the election. The most notorious line in his speech to the incipient mob on Jan. 6 — “we’re going to walk down to the Capitol” — was an ad-lib, not in the text his staff had prepared. But the strength of “Landslide” comes less from these stories and more from a coherent argument that Wolff, in partnership with his sources, makes about how we should understand the period between Nov. 3 and Jan. 20. Most quickly produced books about political events don’t do that.