Mission Impossible: How one man’s epic dash to free his parents saved hundreds

He finds his driver, a young private from London called Bob, and they get their Jeep from headquarters of No. 41 (RM) Commando. They load more ammunition and rations and collect transit papers that will permit them to get through roadblocks. Today, May 7, 1945, is a warm spring morning, and both men roll up their sleeves. They drive into the still-rising sun. Even in wartime, it is an ordinary, almost boring, start to a day despite the fact they are about to attempt something quite extraordinary. The two men didn’t yet know, but it was to be the last day of the war in Europe. A war that has seen as many as 40 million killed, including six million of the continent’s Jewish civilian population murdered by the Nazis.

Lieutenant Gans, an Orthodox Jew originally from Borken, Germany, had heard his parents had been moved from Bergen-Belsen to Theresienstadt concentration camp in what is today part of the Czech Republic.

As the war was coming to an end, the SS was massacring Jews by the tens of thousands to cover up their crimes. He knew the clock was ticking. The night before, Gans decided he could delay no longer. Stories were circulating that Hitler was dead and the Germans were about to formally surrender.

Gans went to his commanding officer, Major Norman Peter Wood, and explained the situation. He requested a Jeep, a driver, a machine gun and some cans of petrol for the 400-mile trek across Germany to Theresienstadt.

Major Wood told him it was madness. Despite Germany’s collapse, the war was not officially over yet. Thousands of SS troops in particular had sworn to defy their high command and fight to the death. Yet Gans was undeterred andWood eventually relented. This stubborn determination was quite typical.

ANS was part of X Troop, a secret British commando unit made up of a unique band of Jewish brothers which the “lady of the X Troop” Miriam Rothschild, who was then married to X Trooper George Lane, dubbed a “suicide squad”.

It was made up of German-speaking refugees from Germany, Austria and Hungary for whom the war was deeply personal. They had mostly arrived in the UK as teenagers on Kindertransport from Germany and Austria only to be interned as “enemy aliens” when war broke out. 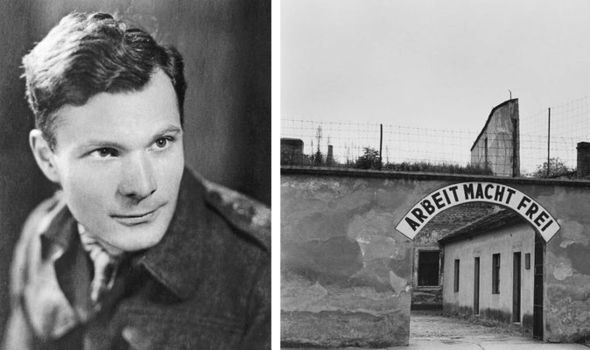 They were a ragtag group, including a semi-professional boxer, an Olympic water polo player, painters, poets, athletes and musicians. Many of their relatives had been murdered in the death camps.

After being recruited in 1942 – during which they were required to take on fake British personas to protect themselves in the event of capture (because almost all were Jewish) – they were deployed to Europe to take part in the major offensives that would eventually bring the war to an end.

They stormed the beaches of Normandy on D-Day, and played a crucial role in the Allied successes in France, Germany, Italy, Holland and beyond. Now Gans and his driver headed out on that surprisingly beautiful spring morning, the landscape was flat, green, and speckled with farms and small scenic towns. Tulips were coming up. The Scheldt ran peacefully alongside the road, debris floating down river into the North Sea.

As they drove east, Holland began to wake: adults out looking for food, children waving as the Jeep passed by, some kids scavenging souvenirs from a crashed aircraft. The roads had been cleared by Royal Engineer bulldozers and travel was surprisingly easy.

Outside Roosendaal they picked up two hitchhiking Canadian soldiers looking for a lift into Germany. Crossing the border into the Reich, it was clear the RAF and US Army Air Forces (USAAF) had been busy. Gans told Bob to slow down as they drove through Borken, his former hometown. 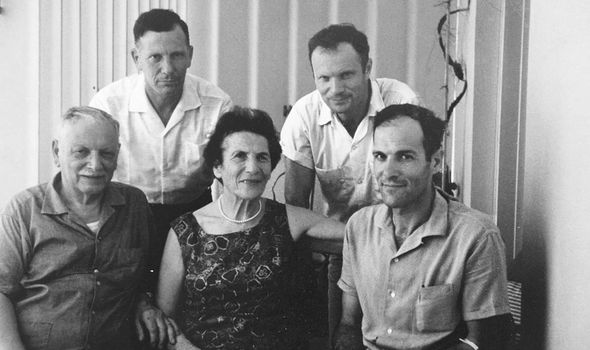 The Allied military government had set up its headquarters in his old home at Bocholter Strasse 48.

Until a few weeks earlier, the Gestapo had been using the house as their local base. American and British flags now flew next to his bedroom window.

Over the next two days, the pair continued eastward to Terezin in Czechoslovakia. On the way, they encountered defecting Germans, freed American prisoners of war, refugees, vanguards of the Red Army. Gans cp charmed and bluffed his way through checkpoints and roadblocks.

He brandished his Tommy gun at German civilians who were out for blood and showed his transit papers to astounded Soviet soldiers who couldn’t believe a British commando wearing a green beret was so far from the Allied lines.

Exhausted, the pair finally made it to the camp. This was the climax of Gans’ war which had already been very busy.

Manfred Gans and his X Troop comrade Maurice Latimer had landed on D-Day at Sword Beach with 41 Commando. Even with carnage so intense it would wipe out half of their unit, Gans managed to capture 25 Germans who told him the safest way off the beach through their minefields.

Over the coming days, Gans and Latimer helped secure crucial German positions such as the heavily fortified radar stations Moltke and Hindenburg. After the Normandy campaign, the Allies had pushed eastward. A port was needed to reduce their supply lines and the obvious place was Antwerp. 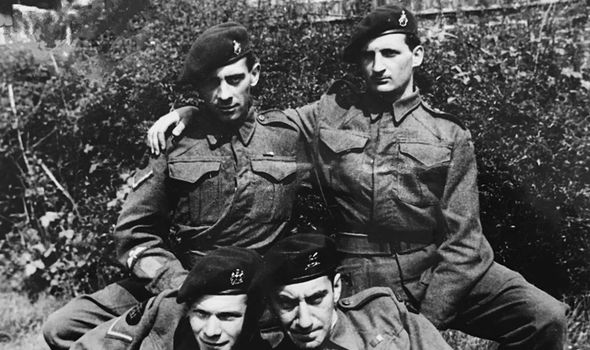 However, for Antwerp to be used effectively, the Allies first had to take the German-occupied island of Walcheren which sat at the mouth of the River Scheldt.

On the night of October 31, 1944, 41 Commando, which still included X Troopers Gans and Latimer, began its assault. It was held by the German Army who were anticipating such an attack, and had created fortifications, artillery, and anti-tank guns along the dykes.

The commandos landed on the beaches and had to navigate heavily-mined dunes and then fight their way through towns held by German soldiers. The first major obstacle was a lighthouse, from where the Germans were training artillery fire on men landing farther down the coast.

Only two of 28 tanks that were supposed to support the attack had made it safely ashore. No one knew quite what to do until Gans decided to take action.

With hisTommy gun on his hip, he sauntered down the main street toward the lighthouse. “Come out and surrender,” he yelled in German, “before our tanks go into action!”

Incredibly, the German officer in charge did come out. Gans told him he was a British commando with an army behind him, talking the man into surrendering. He went on to capture several more important positions.

After a week of intense fighting along the dunes and dykes and in the villages of the island, with high casualty rates, on November 8, 1944, Gans and Latimer together captured a high-ranking German officer who helped negotiate the island’s surrender.

For his heroism, Gans received a rare battlefield commission, and within a few weeks Antwerp was being used as a port for the Allied armies. Now on May 9, 1945, that seemed long ago.

As he entered Theresienstadt, which had been liberated the day before by the Russians, Gans was surrounded by dying Jews, many of whom just wanted to touch him.

He was stunned to learn his parents Else and Moritz were still alive.

After being led to the camp’s “Dutch colony” where they had been placed after being been found in the Netherlands, Gans recorded their reunion in his diary: “The next minutes are indescribable. I suddenly find myself in their arms.

“They are both crying wildly. It sounds like the crying of despair. I look at Father and in spite of having prepared myself for a lot, I have to bite my teeth together not to show my shock. He is hardly recognisable. Completely starved and wrecked.”

Quickly the news got out in the camp. The impossible had happened. A son had returned to seek his parents and has found them. Not all the Jews in the world had been killed. The Nazis had not triumphed everywhere.

I came across the story behind this impossibly poignant reunion while researching my new book X Troop: The Secret Jewish Commandos Who Helped Defeat the Nazis.

As typhoid had broken out in the camp, the Russians ordered Gans and his driver to leave. Yet that wasn’t the end of the story. He drove straight to Breda, in The Netherlands, where he secured a meeting with Princess Juliana. The Dutch royal family had been evacuated after their country fell and had only just returned from exile. 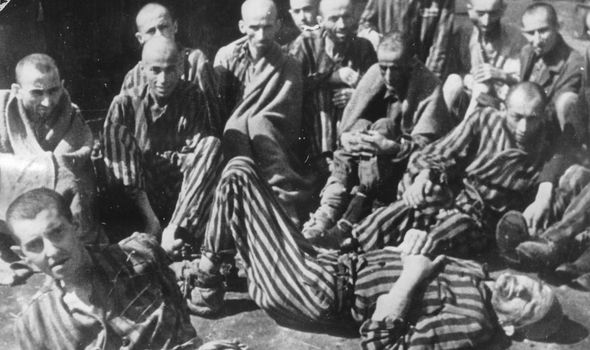 Gans begged the Princess to use her influence to arrange a rescue of the Dutch colony in the camp. Within days, his parents and hundreds of others had been saved. They were the rare lucky ones.

In Theresienstadt, more than 30,000 Jews had already been killed. Gans’ parents had only survived because his mother was fortunate enough to work in the kitchen where she could occasionally smuggle out a potato.

But that was not the end of Gans’ fight against the Nazis. Gans became central in the de-Nazification efforts, interviewing scores of top ranking Germans and gaining crucial information for the Nuremberg trials.

After he was demobilised in August 1946, he completed an undergraduate degree in chemical engineering at the University of Manchester followed by graduate studies at MIT.

He settled in New York with his wife Anita Lamm, also a Jewish refugee from Germany, and their two children. Gans devoted his professional career to the invention and commercialisation of new chemical processes and also worked with the United Nations to help developing countries with their chemical factories.

His parents lived a long, happy life in Israel. It was astonishing to learn the Germans whose hatred had spawned these Jewish warriors of the X Troop in the end were defeated by them. As for Gans, he not only helped beat the Nazis, he won his private war.

X Troop: The Secret Jewish Commandos Who Helped Defeat the Nazis by Leah Garrett (Chatto &Windus, £20) is out tomorrow.

For free UK delivery, call Express Bookshop on 01872 562310 or order via www.expressbookshop.co.uk