New & Noteworthy, From ‘Faust’ to Life in Lockdown

HOMO IRREALIS: Essays, by André Aciman. (Farrar, Straus & Giroux, $27.) In this collection, the author of “Call Me by Your Name” and other novels contemplates the life of the imagination, and the ability to hold competing realities simultaneously in mind.

DISPATCHES FROM THE RACE WAR, by Tim Wise. (City Lights, paper, $17.95.) Drawing on events from the killing of Trayvon Martin to the Black Lives Matter protests last summer, Wise calls to account his fellow white citizens and exhorts them to combat racist power structures.

VINELAND REREAD, by Peter Coviello. (Columbia University, paper, $20.) Coviello, an English professor at the University of Illinois at Chicago, argues that Thomas Pynchon’s novel “Vineland” is an underrated masterwork of political comedy and humanism.

WRITING THE VIRUS, edited by Andrea Scrima and David Dario Winner. (Outpost19 Books, paper, $18.50.) Early in the pandemic, the literary journal StatORec invited writers to describe what they were going through. This anthology gathers 31 of their responses. 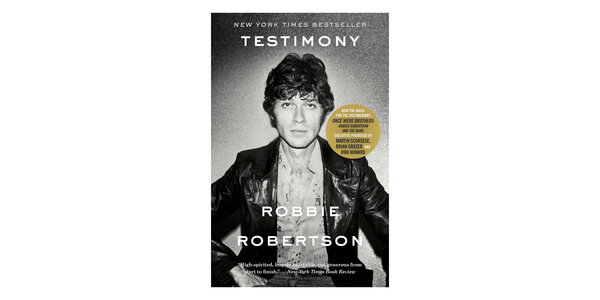 More than ever, I’ve been using music as a buffer, when needed, against the outside world. In that vein, I finally cracked open TESTIMONY, Robbie Robertson’s autobiography. A big fan of the Band, I was eager to learn more about the roots of the group’s singular sound. As history, the book delivers. Sure, there is plenty of Dylan — and the Big Pink section is especially strong — but there is also lots of great stuff about obscure early episodes and encounters, musical and not, that helps illuminate the origins of songs that made characters like Virgil Caine and Crazy Chester indelible — and illustrate how much hard work was involved. Still, I find Robertson less likable as the book proceeds (granted, likability is not a key rock ’n’ roll attribute) and sense a creeping defensiveness that is surely tied to his being just one side of the story. Levon Helm tells another in “This Wheel’s on Fire.” That’s next on my list.