Nikki Giovanni, Finding the Song in the Darkest Days

Over the course of her 52-year career, Nikki Giovanni has written 12 children’s books and eight nonfiction books, and she has released 10 spoken word albums. But the genre for which she is best known is poetry.

When you flip through a stack of her 19 collections (it’s a tall stack), you find her face, still radiant and smiling at 77, staring back at you from the covers. This is an unusual choice for the jacket of a poetry book, but Giovanni is the rare poet whom a good number of people will actually recognize — a distinction that is all the more noteworthy considering how long it has been true.

She was name-checked in the 1980 Teena Marie song “Square Biz,” featured in the Afropunk Festival in Brooklyn in 2016, and both seen and heard reading her poem “Dream” last fall in a campaign ad for Joseph R. Biden Jr. It was 1972 when Ebony magazine first called her “a personality, a star.” Her staying power over half a century comes from a stream of acclaimed work, her proclivity for a punishing schedule of tours and readings, and a fearlessness born of not caring what foolish people think.

“The best thing you can do for yourself is to not pay attention,” Giovanni said during a video interview from her home in Christiansburg, Va.

“People who pay attention all end up on drugs or alcohol, or crazy, or mean,” she added. “You can’t let people you don’t know decide who you are.”

Giovanni emerged as a writer in the late 1960s during the Black Arts Movement, alongside her fellow poets Amiri Baraka and Sonia Sanchez. In one of Giovanni’s early poems, “Reflections on April 4, 1968,” marking the day Martin Luther King Jr. was assassinated, she wrote: “What can I, a poor Black woman, do to destroy america? This / is a question, with appropriate variations, being asked in every / Black heart.”

But for all her renown as a resistance poet, Giovanni has always been just as likely to write about tenderness or breakfast food. (Food is a constant theme in her work, and she is an excellent cook, known among friends especially for her fried chicken, which she rubs down with ginger and cooks slowly in a bath of butter.)

Her latest book, published by William Morrow in October, is “Make Me Rain,” and it starts with a love poem by the same name. The collection includes “Laughter (for Dr. Ford),” about Supreme Court Justice Brett Kavanaugh and President Trump, and “Ferguson: The Musical,” about Michael Brown’s death in 2014, but also “De-Planing,” about navigating autograph seekers when she gets off a plane and needs to use the bathroom.

Black love, Black struggle and Black joy have long been at the center of Giovanni’s work. Her newest book is thick with affection for African-American people in their everyday lives.

“There is no / way not to like Black Americans,” she writes in “Lemonade Grows From Soil, Too.” “We try to practice love. / We use the chicken feet to make a stew; we take the scraps of / cloth to make the quilt. We find the song in the darkest days / to say ‘put on your red dress, baby, ‘cause we’re going out / tonight,’ understanding we may be lynched on the way home / but knowing between that cotton field and that house party / something wonderful has been shared.” 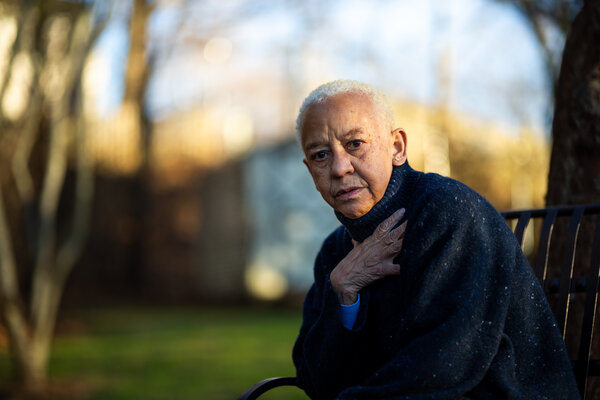 Born Yolande Cornelia Giovanni Jr. in Knoville, Tenn., in 1943, she was nicknamed Nikki at a young age by her older sister, Gary Ann. No remembers why, but the name stuck. The family moved to Cincinnati when Giovanni was a baby, but she returned to Tennessee as a teenager to live with her maternal grandparents. (Before she moved, she said, “If you wanted to know what I was doing on a Saturday night at 11 o’clock, I was listening to my father beat my mother.”)

Starting in the late 1970s, she supported herself, her young son, Thomas, and her parents by writing but also by speaking. Funny, charismatic and captivating while reading her work, she went just about anywhere she was invited, not just to colleges and writing programs but to churches, Y.M.C.A.s and Black sororities.

In 1987, she was recruited by an English professor named Virginia Fowler to teach creative writing at Virginia Tech. She’s been there ever since.

Giovanni and Fowler have now lived together for more than 30 years. They cook together and go to doctors’ appointments together. They keep a pond of goldfish in the yard, and a Yorkie named Cleopatra, who runs the house. But Giovanni does not refer to Fowler as her partner. She calls Fowler her bench, by which she means the person who will always have her back.

“Everybody needs a bench, and in order to get a bench, you have to be one,” Giovanni said. “I could say love, but you get tired of hearing about love.”

Fowler finds herself in the unusual position of being perhaps the foremost expert on Giovanni. She is currently in the process of selecting poems for a Giovanni collection to be published by Penguin, and Fowler estimates that she has written more about Giovanni’s work than anybody else.

“I felt weird about it at first,” she said with a laugh, “but then I was really interested in her work. And I couldn’t understand why it wasn’t receiving attention from the academy.”

These days, Giovanni does not travel because of Covid-19, but she still teaches in person. She has also toured for her book, albeit virtually. Not one to be subtle with her opinions, in a promotional interview last month with Angela Yee and Charlamagne tha God on their radio show “The Breakfast Club,” she expressed disappointment that Mr. Trump had not died of Covid, saying there would have been less suffering and death if he had.

“Make Me Rain” is her 19th book with Morrow — the first came out before her current editor, Rachel Kahan, was born — but she already has a “new book” file on her computer, with more than 25 poems in it so far.

“She likes to write,” Fowler said. “She’s deeply imaginative, but she may not remember anybody she meets on a given day. She’s living somewhere else.”

Despite being so free with her opinions and raw in her work, Giovanni draws a distinction between her poetry and herself, Fowler said. She has a small circle of close friends, and her personal life is not a matter for public consumption. She has managed to keep the identity of her son’s father private for 51 years.

The writer and poet Kwame Alexander, a former student of Giovanni’s, is a part of that inner circle, a man she calls her literary son.

“When I was at Virginia Tech she said to me, ‘Kwame, I can teach you how to write poetry, but I can’t teach you how to be interesting,’” he recalled. She tells her students to be bold and raise their voice, he said: “Dance naked on the floor and don’t be afraid of who’s watching.”

“Make Me Rain” feels timely in 2020, a year when so many people poured onto the streets in support of Black Lives Matter.

But Giovanni does not consider this a moment for her to be out front.

“I am an old lady, which I recommend,” she said. “I really like what the young people are doing, and I think my job is to be sure to get out of their way, but also let them know, if it means anything to them, that I’m proud of them.”

Other than that, Giovanni said, you can find her sitting outside near her pond on warm evenings, having a glass of champagne with her goldfish.

“I recommend old age,” she said. “There’s just nothing as wonderful as knowing you have done your job.”