Patricia Lockwood’s First Novel Reaches for the Sublime, Online and Off

NO ONE IS TALKING ABOUT THIS
By Patricia Lockwood

“The only solution to the internet was to write bad novels with central personages who do not appear.

“The only solution was to write bad novels that mimicked the computer network in its obsessions with junk media.

“The only solution was to write bad novels that mimicked the network in its irrelevant and jagged presentation of content.”

Jarett Kobek wrote these self-ironizing words in his 2016 novel “I Hate the Internet”; now they could serve as a rubric for critics asked to review novels about the internet and to determine whether these novels are solemnly, unrepentantly bad or good in spite of themselves. “I Hate the Internet” falls into the latter category, as do Dennis Cooper’s “The Sluts” (2004), Tao Lin’s “Taipei” (2013) and Lynne Tillman’s “Men and Apparitions” (2018). The lasting achievement of these strange, excellent novels is to represent not only the relentlessness with which the internet intrudes on our perceptions, our consciousness, but also the larger and more distant forces that allow it to do so. Such novels speak of trolls and mobs, of identity and authenticity, in the same breath with which they whisper about the overproduction of personal “data,” “the information of existence” (Lin), or how corporations command “the thrill of the new” to create demand for their products (Tillman). They find ways, as the critic Mark McGurl puts it, “to speak back to and against” their own conditions of existence.

The most recent contender in this genre is Patricia Lockwood’s “No One Is Talking About This.” The author of two poetry collections and a memoir, “Priestdaddy,” Lockwood is a modern word witch, her writing splendid and sordid by turns. Her prose rambles from animal gags to dirty talk to infinitely beautiful meditations on the nature of perception that deflate and turn absurd before they can turn philosophical. She has honed her craft on the internet, mainly on Twitter. That platform, as a mistrustful reviewer once complained, “rewards her particular talents for compression, provocation, mockery, snark,” inspiring poems like “Search ‘Lizard Vagina’ and You Shall Find,” or “The Father and Mother of American Tit-Pics.”

[ Read our profile of Lockwood. ]

“No One Is Talking About This” is, in part, a rebuttal to this vision of the internet as enabling a mean and cramped sort of art. The chief virtue of the novel is how it transforms all that is ugly and cheap about online culture — the obsession with junk media; the fragmentary and jerked presentation of content; the mockery, the snark; the postures, the polemics — into an experience of sublimity. Lockwood grasps one of the most extraordinary tricks of the internet, which is its capacity to metamorphose billions of short, often brutish and haphazard utterances into something that feels immensely and solidly real; a single entity, “the internet”; a presence that overwhelms us with both wonder and despair. How big is the internet, exactly? Can we ever know all of it? This feeling of obscurity used to be the domain of nature; what Wordsworth once described as “a portal in the sky.” Lockwood gives us, more simply, “the portal.”

What is the portal? “A brain, a language, a place, a time?” Lockwood’s unnamed narrator asks in what amounts to an extension of Lockwood’s essay “The Communal Mind,” published in The London Review of Books in 2019. She is a restless narrator, who thinks in beautiful, witty, tidy paragraphs. She shifts between pronouns and points of view the way one might cycle between tabs late at night, half bored, half elated. There is the all-encompassing “we,” magicking itself into existence whenever everyone online seems to agree on something. There is the “you,” a direct message to the reader, at times solicitous, at times accusatory. There is the more distracted “she,” who ignores us as she posts, clicks and scrolls to the point of hallucination, disavowing the idea that modern novels, like this one, should accommodate old-fashioned analog devices like plot or character. 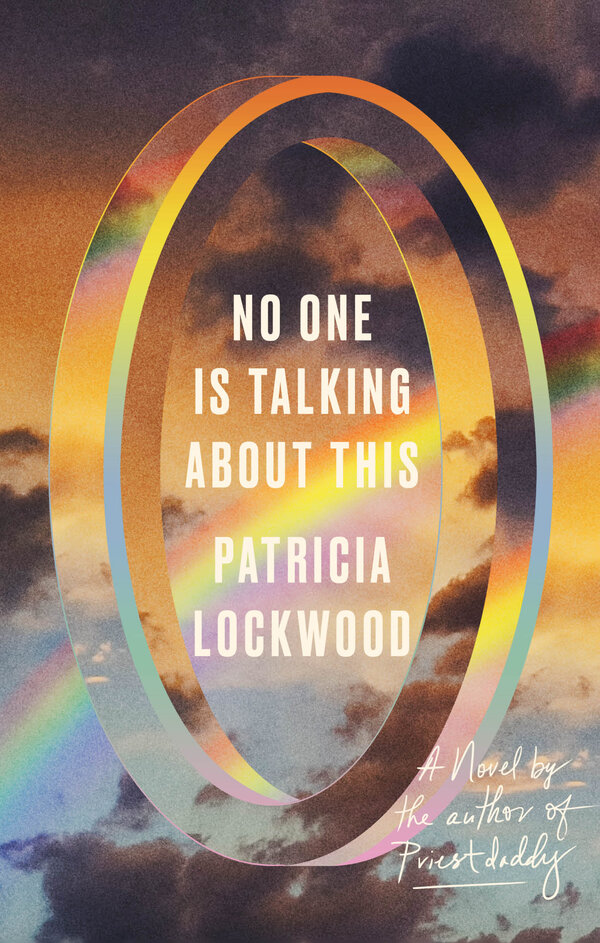 “Why were we all writing like this now?” the narrator wonders. “Because a new kind of connection had to be made, and blink, synapse, little space-between was the only way to make it. Or because, and this was more frightening, it was the way the portal wrote.”

The question many people have demanded that the great internet novel answer is: What does it feel like to be online? For Lockwood, the question of how it feels for one person to be online is indistinguishable from how the internet would narrate its own virtual existence — how it would speak, if it could speak, in a single voice, of the intense, exhausting accretion of matter that makes it feel alive, electric with rage and desperation, greedy for attention and praise, and, as the narrator’s husband says, “like a ventriloquist’s dummy,” “just totally, totally dead.”

“This did not feel like real life, exactly, but nowadays what did?” the narrator wonders. She emerges as a portal for the portal’s uncanny consciousness, churning individual thoughts into tweets, tweets into memes, memes back into the language of thought, until what belongs to me and what belongs to you can no longer be discerned amid this mute, incessant chatter. “What about the stream-of-a-consciousness that is not entirely your own? One that you participate in, but also acts upon you?” the narrator asks. Perhaps worried about being misunderstood or read the wrong way — a persistent fear online, where intent is impossible to fix — the narrator has an anxious habit of providing her reader with running commentary, a user’s guide to the novel.

[ “No One Is Talking About This” was one of our most anticipated titles of February. See the full list. ]

The challenge the novel sets for itself is how to wrench the narrator from the portal and into a singular reality. Her release comes in the novel’s second section, which begins when the narrator learns that her sister is carrying a child with Proteus syndrome, a condition that causes an overgrowth of skin and bone — a child who will likely die soon after she is born.

The narrator knows that the internet is no place for bereavement; here, there are only drive-by mourners, rubberneckers gawking at the pain of others. Both for the sake of plot, what little plot can be salvaged, and for the sake of self-preservation, she must withdraw. Though for one so closely identified with the portal’s consciousness, such withdrawal can only be partial. The fragments remain but are repurposed for the inchoate work of loving then losing. Humor is attempted, but falls terribly flat, dragged down by sentiment. Grief is always a slog.

Yet from this grief emerges grace, a sublimity that is not universal but achingly particular. The baby grows toward death, with “a kind of absolutism that was almost joy,” inhabiting a body and a consciousness that is wholly her own. “She only knows what it is to be herself,” the doctors keep repeating. The baby is not a metaphor, the narrator warns us, yet her wild, untrammeled, inscrutable being is everywhere counterpoised by the internet’s similarly enigmatic existence. When she dies, her doctors harvest her brain. “As long as people were looking at that mind, it was still active in the world, asking and answering, finding out about things, making small dear cries of discovery,” the narrator thinks.

Here is the novel’s secondary virtue: its insistence that the shadow forms of living and thinking — the life led online amid the buzz of the hive mind; the life that persists after death — are, for all their vaporous mystery, no less real than the life led by you or me. And so, the question the narrator first asked of the portal comes back at the end to strike a consolatory note after death: “This did not feel like real life exactly, but nowadays what did.”

Something Kobek did not anticipate in his rubric for how to solve the problem of the internet was that people might stop writing novels altogether. They might write experimental essays or memoirs; champion shagginess and shapelessness; pronounce, as Lockwood did in a recent interview, that the internet has anointed “the fragmentary and the autofictional … the modes of the times.” Whether or not this is true, one test of the novel in the age of the internet is if it offers enough resistance, on the level of plot or character, structure or tone, to the very media forms it wants to represent. A good novel would not speak in the voice of the internet; it would speak over it, and the clamor it made would allow its critics to hazard a stronger claim for the value of the novel to our virtual lives. For all the local beauty and humor of “No One Is Talking About This,” it does not feel like a good novel, exactly, because it does not feel like a novel at all. But nowadays what does?