Readers Have Been Eagerly Waiting for Barack Obama’s New Memoir. Struggling Booksellers Have, Too.

Shortly after President Barack Obama left office in 2017, in the aftermath of a contentious election that cost his party the presidency, he sat down with a yellow notepad and began writing an account of his time in the White House.

Nearly four years later, Mr. Obama is preparing to release his book in the wake of another volatile and polarizing presidential race. His memoir, “A Promised Land,” arrives at a moment of deep political, cultural and social unrest — tensions that have been heightened by a global pandemic and an economic crisis.

It’s a challenging environment, to say the least, in which to release a book, even one of the most highly anticipated of the decade. Bookstores have limited their foot traffic to comply with public health measures, and many customers are still wary of in-person shopping. At the same time, supply chains are under intense strain as capacity issues at printing presses have delayed dozens of books this fall.

But in spite of such setbacks, “A Promised Land” is shaping up to be one of the top-selling political memoirs of all time, and a potential lifeline for booksellers whose sales have plummeted during the pandemic.

Mr. Obama’s publisher, Crown, is printing 3.4 million copies of “A Promised Land” for the United States and Canadian market, and another 2.5 million for international readers. The book, which runs to 768 pages, is being released simultaneously around the world, and will be available in 19 languages, including Spanish, Portuguese, Finnish, Romanian and Chinese (translations into six other languages are still underway). Demand among American customers is so high that Penguin Random House, Crown’s parent company, has printed 1.5 million copies in Germany to bring over on cargo ships.

It still may not be enough to meet demand.

Barnes & Noble is stocking around half a million copies of the former president’s book, but the chain expects to sell even more than that, based on the preorders for “A Promised Land” and the strong sales of Michelle Obama’s memoir, “Becoming,” published two years ago. 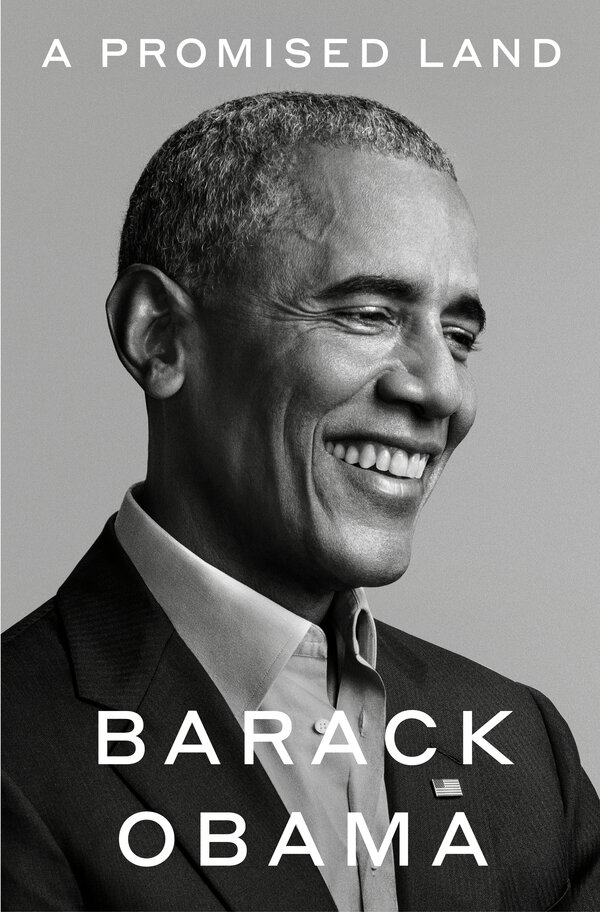 “We are taking as many as Penguin Random House will give us,” said James Daunt, the chief executive of Barnes & Noble. “If there was an unlimited supply, we would take more. I think we will end up selling an enormous number.”

For struggling independent stores, Mr. Obama’s book — with a $45 list price — could prove crucial in recovering some of the losses suffered during the shutdown.

Kramers, a bookstore in Washington, D.C., is opening its doors for a midnight release on Nov. 17, the sort of fanfare more typical for a new Harry Potter book than a political memoir.

Politics and Prose, another D.C.-area independent bookstore, has placed a substantial order for more than 2,000 copies. Bradley Graham, the store’s co-owner, said that the book could have a ripple effect, since shoppers who flock to buy big best sellers often pick up other titles as well. “It should make a significant difference in helping to boost sales at a time that we desperately need it,” Mr. Graham said.

Even before its release, “A Promised Land” was exerting a strong gravitational pull on the industry. The Booker Prize decided to move its award ceremony, initially scheduled for Nov. 17, to Nov. 19, to avoid overlapping with the publication. (Mr. Obama will make an appearance at the Booker Prize’s online ceremony, alongside the novelists Kazuo Ishiguro, Margaret Atwood and Bernardine Evaristo, where he will talk about what he’s taken from reading past Booker-winning novels.)

Readers have been waiting for years for Mr. Obama’s account of his time in the White House, which took him around two and a half years longer to write than he anticipated. “I expected to be done in a year,” Mr. Obama writes in his preface. “It’s fair to say that the writing process didn’t go exactly as I’d planned.”

A representative for Mr. Obama said that the timing of the release was dictated by his writing schedule, which continued on into this summer, when the election cycle was already in full swing. “President Obama was completely focused this fall on helping elect Joe Biden, so there was never a thought given to having it come out in the lead-up to the election,” said Katie Hill, communications director for Mr. Obama.

Now, Mr. Obama is promoting his book at a tense and delicate political moment, as President-elect Biden seeks to lay the groundwork for his administration while President Trump refuses to accept the results of the election. As a former president who retains high approval ratings with the public, Mr. Obama will no doubt be called on in interviews to address the current climate of partisan division, and to deliver his views on how Mr. Biden should navigate it. But Mr. Obama also wants to avoid stepping into Mr. Biden’s spotlight.

“President Obama is very aware, as he will be out there talking about his book, that he’s not the leader of the Democratic party,” Ms. Hill said. “He does not want to be out there in any way overshadowing Joe Biden.”

Of course, the biggest obstacle to any plan in 2020 is the coronavirus. As the virus continued to spread through the summer and early fall, it became clear that Mr. Obama would not be able to conduct a book tour with appearances in front of large audiences, like Mrs. Obama’s nationwide tour for “Becoming,” which involved events in major sports arenas. Mr. Obama isn’t holding any in-person events, except for select interviews. Instead, he will rely on reaching readers through his large social media following — he has more than 125 million Twitter followers, and around 90 million followers on Facebook and Instagram combined — and interviews with traditional outlets like “60 Minutes,” “CBS Sunday Morning,” Oprah Winfrey’s Apple TV show and The Atlantic magazine, as well as on podcasts and youth-focused media outlets. He may also hold some live virtual events, Ms. Hill said.

There’s a long literary tradition of former presidents publishing reflections of their time in office, tracing back to works by James Buchanan and Theodore Roosevelt. While some became best sellers, including George W. Bush’s “Decision Points” and Bill Clinton’s “My Life,” former presidents’ accounts can often be dutiful and plodding marches through recent history.

Expectations are considerably higher for “A Promised Land,” which has been highly anticipated ever since the Obamas jointly signed a record-breaking multibook deal for $65 million with Penguin Random House in 2017. Mrs. Obama’s book has sold 14 million copies worldwide, including more than 8 million in the U.S. and Canada. Mr. Obama’s previous books have also been commercial and critical hits. “Dreams From My Father,” originally published in 1995, became a best seller after Mr. Obama rose to political prominence. That memoir has sold more than 3.3 million copies in the U.S. and Canada, while his 2006 book, “The Audacity of Hope,” which was more policy-oriented, has sold nearly 4.3 million copies, according to Crown.

Rachel Klayman, Mr. Obama’s longtime editor at Crown, said “A Promised Land” was more challenging for him to write than his previous two books. While he had some assistance with the research, and sought editorial feedback from former members of his administration, he wrote the book himself.

The first time Mr. Obama met with Ms. Klayman to discuss it, she said, he had several chapters outlined on a yellow legal pad. He planned to begin the book with a scene on the night he won the Iowa Caucus in 2008, a pivotal moment on his path to the White House. When he handed in the first draft, Ms. Klayman was surprised to see that he opened instead with a brief scene at the White House’s West Colonnade, and then a flashback to his time as a young adult in Hawaii.

Initially, Mr. Obama planned to cover his eight years as president in a single volume, but it became clear as he was writing that such a book would have been too vast and unwieldy. “A Promised Land” covers Mr. Obama’s youth and his political awakening, and ends with him meeting the Navy SEAL team involved in the raid that killed Osama bin Laden.

“When I read the early chapters, I told him he was a completist, and that would make it hard to bring it in at a reasonable length, and I wasn’t wrong,” said Ms. Klayman, who added that she felt the decision to split the book into two volumes enhanced the narrative. “He’s a superb writer, but no one would accuse him of being succinct.”

After Mr. Obama finished the book, a handful of trusted readers got early copies, including the Pulitzer Prize-winning author Isabel Wilkerson and the historian Doris Kearns Goodwin.

Ms. Wilkerson said Mr. Obama’s book was more introspective than a standard political memoir. “I found it to be a balance of grandeur and intimacy,” she said. “He’s very frank.”

Booksellers hope that Mr. Obama’s candor will draw customers back into their stores.

Lauren Zimmerman, who owns Writer’s Block Bookstore in Winter Park, Fla., said that her community, just north of Orlando, is fairly purple politically, and she doesn’t expect many conservatives to buy the book. But she’s still placed a significant order of more than 40 copies — for a John Grisham book, she said, the store would normally order about a dozen.

“There are people who don’t necessarily buy books all the time, but they will buy this one,” she said.

There will also likely be customers who want to have the book in their homes as a visible object, even if they read it as an e-book or listen to it as an audiobook — or don’t bother to read it at all.

“I remember when we had our first Catholic president, people had his picture on their wall,” said Kris Kleindienst, a co-owner of Left Bank Books in St. Louis. “I feel like for some of our households, this book is that.”