Remembering Britain’s Railways: How the rise of the diesel left us steaming 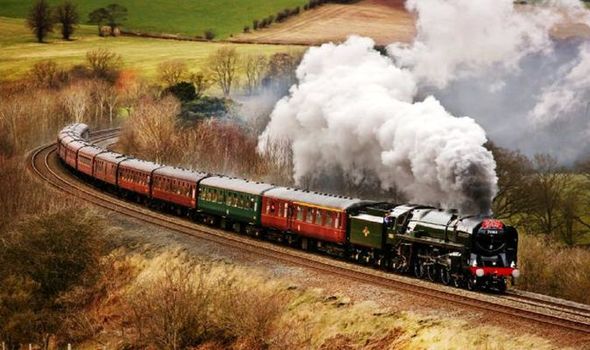 IT WAS known as the Fifteen Guinea Special and it was famous – or perhaps infamous – in 1968 as the last mainline passenger service to be hauled by steam locomotives on British Rail. As an impoverished art student at the time I couldn’t afford such a princely sum but tickets to railway enthusiasts and historians sold out in record time.The packed train began its farewell journey at Liverpool Lime Street station on August 11 and headed east to Manchester Victoria.

Here the Stanier “Black Five” locomotive was changed for the Britannia Class “Oliver Cromwell” for the next leg to Carlisle. Along the route, thousands of people came out to witness the end of an era. On stations, bridges, and in fields alongside the tracks, they waved to the passing train, many with tears in their eyes.

Having returned to Liverpool later that afternoon, a complete ban on standard gauge steam-powered locomotives was imposed the next day – ending nearly 150 years of a form of traction in which the UK had been a world leader.

Born in Gloucester, and growing up just across the road from the old Midland Railway main line from Eastgate Station to Bristol, I couldn’t fail to love steam railways. Just across the park was the High Orchard docks branch railway, worked by diminutive steam locomotives built in Derby in 1907 complete with driver’s bicycle slung over the front buffers. Getting to my primary school entailed crossing the Midland main line and, inevitably, my journey was interrupted by the passage of a train.

Sometimes it was a long, slow goods train, hauled by a work-stained locomotive belching steam and smoke, but sometimes there was the sheer excitement of seeing an immaculate “Jubilee” or “Black Five” locomotive like the “Pines Express” or “The Devonian” faithfully ploughing the journey from Manchester to Bournemouth or Bradford to Paignton.

BACK at home, my father had built me (or was it really for himself?) a splendid “0” gauge layout on trestles around one of our attics.With massproduced Hornby tinplate and topof-the-range scale model Bassett- Lowke clockwork locos racing around the tracks and the sound of the Bristol to Newcastle mail train outside, how could a small boy not be totally absorbed by railways?

Having passed my 11+ exam, I went to grammar school where several of my classmates had already been bitten by the trainspotting craze. One Saturday, I caught the bus to Gloucester to investigate this phenomenon. I’ve still got my Sterling No. 3 Notebook from that fateful day in 1957 when I hung around Central Station, taking in the scents of smoke, steam and oil. Now aged 75 I still recall that powerful smell today.

Within a short space of time I was travelling far and wide; to Swindon Works, Derby Works and Bristol and, in later years, to London,Wales and Scotland.

Gloucester itself was a fascinating place with the comings and goings of bothWestern Region and London Midland Region expresses, coal trains from – and iron ore trains to – South Wales, plus all of the local traffic from the docks, carriage and wagon works and gas works.

One of the daily highlights was the “Cheltenham Spa Express”, its gleaming brown and cream coaches hauled by an immaculate Gloucester Horton Road rain “Castle” class loco. This famous train had been carrying passengers between Cheltenham and London since 1923 and, for a period during the 1930s, as the “Cheltenham Flyer” was the fastest train in the world. I still glance at my watch most mornings at 8.19am remembering its departure time from Gloucester Central station.

My father didn’t own a car and holidays were bliss. Each year, we spent one or two weeks in either Swanage, Lyme Regis, Exmouth or Woolacombe and the journey there and back was the highlight of the holiday.

One trip, in particular, was recorded for “posterity in my trainspotting notebook but remains crystal clear in my memory. It was August 3, 1963, and we were going on holiday to Lyme Regis – by steam train.

Suitcases packed, our long journey started at Gloucester Eastgate, where loco No. 73068 (built by British Railways at Crewe in 1954) headed south with the 7.30am three-carriage stopping train for Bristol.

After achieving a top speed of 62mph between Berkeley Road and Charfield we arrived on time at Mangotsfield where we alighted to wait for our train to Bath Green Park. There, a Bournemouth West-bound six-coach train pulled in from Bristol headed by tank loco No. 41249 and we were off to Bath.

The next stage of our journey to Templecombe left Bath Green Park ten minutes late, working hard to catch up lost time we thundered through the single-bore Devonshire and Combe Down tunnels as we began our climb over the Mendips before we eventually reached Templecombe 15 minutes late.

It was, in 1963, still a great place to watch steam trains – not a diesel in sight for miles around. We didn’t have long to wait for our train to Axminster which arrived from Waterloo behind the “Elders Fyffes” – built in the 1940s these magnificent express locos had been designed for the Southern Railway and were named after Merchant Navy shipping lines. Accelerating hard out of the station we reached 87mph – the maximum speed – before our next stop at Yeovil Junction.

With my head leaning out of the carriage I spotted en-route five locos named after West Country towns and famous Battle of Britain RAF squadrons, before we arrived at Axminster around five minutes late – yes, even after all these years it’s there in black and white in my handwriting!

‘Hundreds of of boys the thrill glimpsing fantastic engines’

Since 1913, the six-mile picturesque branch line to Lyme Regis had been home to three of the veteran ex-London & South Western Railway radial tank engines built in the 1880s but by 1963 these were just a fading memory. By then traffic on the line was in the charge of more modern tank engines and the last part of our long journey was behind No. 41307 of Exmouth Junction shed.

With a distant view of the sea we arrived exactly on time at 1pm at the little hilltop terminus. To a modern reader, my obsession must sound odd but I was not alone.

Hundreds of thousands of boys (I never met any girls) across the country were avid trainspotters, enjoying the thrill of glimpsing these fantastic steam engines and writing their numbers down in notebooks.

There was also a certain romantic element seeing the destination name boards on the carriages to seemingly far off places such as Sheffield, Newcastle, Bournemouth, Paignton and Penzance.

There are still a few trainspotters out there today but our modern, sanitised railways with their reliance on health and safety certainly don’t offer the excitement of those innocent days in the early 1960s when good old British Railways was a national institution and steam still reigned as king.

Sadly, thousands of miles of Britain’s railways were closed during the 1950s, early 1960s and in the post-Beeching years from 1963 onwards.And thousands of steam locomotives had been scrapped by 1968 to make way for diesels.

At the time of labour disputes in the coal industry, diesels were seen as a more dependable, cheaper and cleaner option, doing away with the need for a fireman and a host of other supporting jobs.

The end of steam had been planned since 1955 when the Modernisation of British Railways White Paper had been published but it was thought steam would cling on to life until about 1980 – how wrong they were.

A myriad of hurriedly introduced, untried and untested diesel types swept away steam for good. Some of the more modern steam engines had enjoyed a working life of less than ten years before being consigned to the scrap heap.And many homegrown diesels did not fare much better. Britain soon started to look overseas for its locomotives. In its golden age, we had not only built our own but had also been a major exporter of steam locomotives to the British Empire.

Manufacturers like The North British Locomotive Company, Armstrong Whitworth and Beyer, and Peacock have long since disappeared and we now import parts from Japan to be assembled in a factory in County Durham to make the Class 800 Intercity Express Train.

AND even some of our modern passenger train operating companies are owned by the state-owned railways of Italy, Holland and Hong Kong.

Yet despite their annihilation, steam railways have since enjoyed a renaissance. Incredibly, there are now more than 100 narrow-gauge and standard-gauge steam-operated heritage railways in Britain, all relying on an army of unpaid volunteers to survive and thrive.

Many of their locos were lovingly restored from rusting hulks by railway preservationists after being hoarded by Dai Woodham, who ran a steam-era scrapyard, a veritable locomotive graveyard, in Barry, SouthWales.

Today we can see them at work not only on heritage railways but also on mainline steam charter trains across the country. And young or old, who doesn’t get a flutter of anticipation to see a mighty steam train pulling by? Long live steam!