Sam McBratney Dies at 77; Wrote ‘Guess How Much I Love You’

Sam McBratney, whose bedtime story expressing the affection between a father hare and his son has sold more than 50 million copies and immortalized the breadth of their love for each other as “up to the moon — and back,” died on Sept. 18 at his home in County Antrim, Ireland. He was 77.

His death was announced by Candlewick Press, his publisher. No cause was specified.

Mr. McBratney was a teacher and had already published 23 books when he retired in 1990, at the age of 47, and embarked on a picture-book project proposed by an editor for, he later recalled, “a Big One to read to a Little One.”

Meticulously drafting on average two words a day over six months, Mr. McBratney produced “Guess How Much I Love You,” published in 1994, a 395-word colloquy in which two nut-brown hares playfully one-up each other in expressing their feelings.

Composing a picture book may sound easy, he said, but “every word you write is fighting for its place on the page.”

Gracefully illustrated by Anita Jeram in a soft palette of watercolors, “Guess,” originally published by Walker Books, became a children’s classic. It has been translated into 57 languages and spawned a pop-up version, a drove of stuffed toy hares, an animated television series and a stage play.

A generation later, a sequel, “Will You Be My Friend?,” is being published by Candlewick Press this month.

“You could recognize his voice in a moment — he was an exceptionally talented wordsmith and always knew exactly what children would enjoy hearing the most,” Karen Lotz, group managing director of the Walker Books Group, a British publisher that includes Candlewick in the United States, said in a statement. 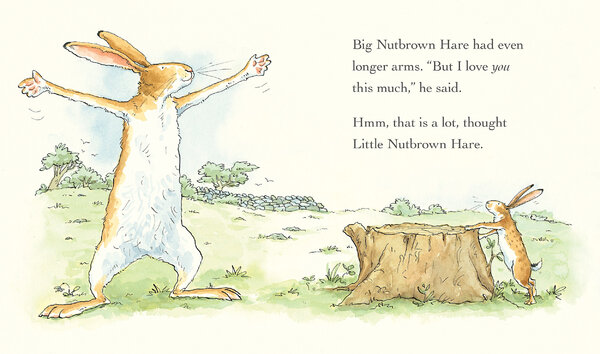 Samuel McBratney was born on March 1, 1943, in Belfast, Northern Ireland, to Samuel and Verina McBratney. He grew up in a period of scarcity during and immediately after World War II; during the war, his family had to evacuate their home near Belfast’s shipyards.

His father, who worked as a compositor for The Belfast Telegraph, was a fancier of Zane Grey’s western novels. His mother expressed skepticism when Sam said that when he grew up he might want to write poetry for a living.

“There was a long pause and she said, ‘You know you can be put in jail for stealing other people’s words,’” he recalled in an interview with the Reading Rockets literacy program.

Most of the individual words in his books are not innovative (though some are, like “meese” as a plural for moose). But, Mr. McBratney said, his syntax was original.

“I am basically an introspective character,” he said. “And I hardly knew what I’m thinking until I see it written down.”

After earning a history degree at Trinity College, Dublin, he wrote his first novel, “Mark Time,” a semi-autobiographical coming-of-age story, in 1969; it was published in 1976. He began teaching in 1970 in primary and secondary schools and wrote 23 novels (most of them for younger readers) until he retired in 1990 to become a full-time author.

Writing from 8 to 11 p.m., a timetable he developed while teaching, he published nearly 70 books in all, mostly for children and young adults, often inspired by stories he spun for his own children when he put them to bed.

His survivors include his wife of 56 years, Maralyn (Green) McBratney, a teacher; two sons, Adam and Patrick; a daughter, Sarah; and six grandchildren.

What Mr. McBratney loved most, he told Reading Rockets, was “the idea that you know somewhere in the world tonight some mom or dad is going to be reaching down a copy of a book that I wrote and reading it to the most precious thing they have in the world, you know. For writers that’s the holy grail.”

Last year, on the book’s 25th anniversary, he recalled a comment he once received from a father.

“He wrote, ‘On good nights my little girl loves me all the way to the moon, but on bad nights she only loves me to the door,’ Mr. McBratney said. “If you’re a parent (or a grandparent like myself), here’s hoping that you mostly make it to the moon. And back. …”