Six of the best for the Miles Franklin shortlist

Trent Dalton’s Boy Swallows Universe may be a barnstorming number-one bestseller, having racked up sales of more than 100,000 copies, but it has failed to make the shortlist for this year’s Miles Franklin Literary Award, Australia’s most significant literary prize.

Six novels have been listed for the $60,000 award for fiction: The Lebs, Michael Mohammed Ahmad; A Sand Archive, Gregory Day; A Stolen Season, Rodney Hall; The Death of Noah Glass, Gail Jones; Too Much Lip, Melissa Lucashenko, and Dyschronia, Jennifer Mills. 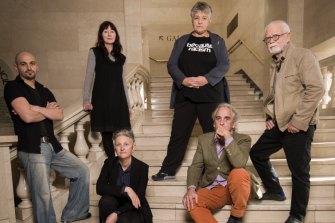 Hall has won the Miles on two previous occasions – for Just Relations in 1982 and The Grisly Wife in 1994 – while Ahmad, Day and Mills are listed for the first time.

Jennifer Mills’ Dyschronia has climate at its core. In the book, the sea around the small town of Clapstone vanishes. Sam, her main character, has a unique sense of time: she can see into the future, but is she predicting what is going to happen or is she ensuring that it does happen?

Australia may be recalibrating its attitude to climate change, but Mills is worried that adjustment is not happening quickly enough.

"I think the novel’s an investigation of a series of questions and the main question to me was how are we accountable to the future," Mills said. "By having a character who has visions of the future and seeing how the town responds to them I was able to look at this question of ecological catastrophe from the point of views of foresight and memory.

"To have dyschronia as a diagnosis of time sickness is also my diagnosis of this cultural moment in that our concept of the future is changing rapidly. Of course, in Australia we also have the problem of understanding the past and how to integrate colonisation into our sense of ourselves as morally good people."

If Mills’ novel has its eye on the future, Gregory Day’s, which like most of his novels is set on the south-west coast of Victoria, has its eye on history – individual and national. There’s a reason why he calls this story of an engineer working on the Great Ocean Road, who is also a fan of modernist literature, an archive.

"I was really interested aesthetically in sitting on the seam between fiction and non-fiction. I wanted to build it like I was curating this person’s archive, which included journals, photographs, manuals."

In that he was influenced by his enthusiasm for local history documents.

"They each have their own lexicon, the words, the language that you find in them. I’m really embedded in this place. I’m trying to build some body of work, some maps of here that include all the misses and the glitches of Australian history. I’ve realised that like any little place, it contains the whole world."

Bernadette Brennan, author most recently of A Writing Life: Helen Garner and Her Work and one of the Miles Franklin judges, said the shortlist offered a diverse range of voices and experiences: "Each writer has been unafraid to take risks in their narrative, in one or more of structure, subject matter or style."

The winner will be announced on July 30.