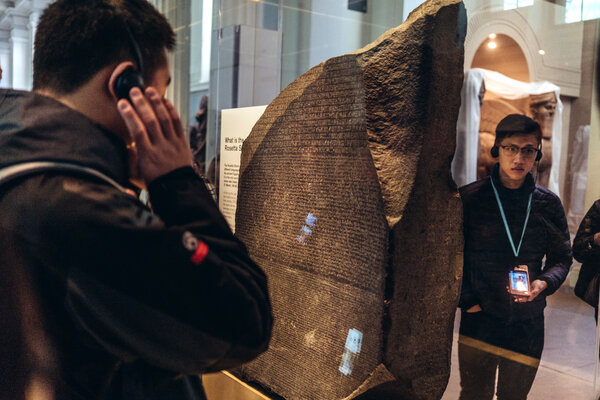 On a steamy day in July 1799, a member of a French military work detail at a tumbledown fort in the Nile Delta made an unusual discovery. Amid a pile of rubble being used for a renovation project, he noticed a 4-foot-by-3-foot granite slab, covered on one side with intricate inscriptions. Lt. Pierre-François Bouchard, the officer in charge, sensed its significance and turned it over to scholars for analysis.

The nearly one-ton stela, experts determined, had come from a temple dedicated to the Greek-Egyptian King Ptolemy V in 196 B.C. And the three bands of text — classical Greek, hieroglyphs and an Egyptian shorthand called Demotic — were intended to proclaim the monarch’s achievements in multiple tongues to the peoples of the empire. All three were dead languages, but the Greek alphabet was still in use. The discovery of the slab, called the Rosetta Stone after the town in which it was found, reignited the ultimate linguistic challenge: deciphering the symbols of the Pharaohs.

Edward Dolnick’s “The Writing of the Gods: The Race to Decode the Rosetta Stone” is an engrossing account of the 20-year competition that followed. A former science writer for The Boston Globe and the author of books about Isaac Newton and a Dutch art forger who duped the Nazis, Dolnick here conjures up another intricate intellectual caper. With its thrilling dissection of the decoding process, it calls to mind Margalit Fox’s “The Riddle of the Labyrinth: The Quest to Crack an Ancient Code” (2013), about three scholars who deciphered Linear B, the 3,400-year-old script excavated from the ruins of Crete’s Minoan civilization. Like Fox, Dolnick exuberantly captures the frustrations and triumphs of scholars as they puzzle out the meaning of long-dead runes, “seduced by tantalizing clues and then careening into dead ends and losing hope, but then spotting new markers and dashing off jubilantly once more.”

From the time of the Roman Empire, linguists had tried, with no success, to figure out what hieroglyphs had to say. The spread of Christianity hastened the disappearance of anything to do with ancient Egypt: In A.D. 391, Theodosius the Great ordered Egyptian temples to be smashed, and the last hieroglyph was carved into a temple on an island in the Nile in 394.

The language quickly fell into oblivion. Horapallo, a fifth-century Egyptian priest, believed that each pictograph had a deep hidden meaning, and he engaged in wild stabs in the dark to figure out what that was. A hawk must symbolize a god, he posited, because birds fly on a slant and “only the hawk flies straight upward.” A hare connotes “open” because it seemed never to shut its eyes. Others ventured up similarly blind alleys, stumped by symbols that offered no clues about whether they were to be read phonetically, or stood for ideas. “Suppose the last English speaker had died 20 centuries ago,” Dolnick writes. “How would anyone ever learn that the sounds c-a-t pronounced in quick succession meant ‘furry animal with whiskers’?”

All that changed with the Rosetta Stone. British forces captured the slab from Napoleon’s army in Egypt in 1802 and shipped it to the British Museum, initiating a quest by two geniuses to unlock the code. Thomas Young was a British polymath who excelled in both physics and linguistics; Jean-François Champollion, who grew up in a provincial French backwater during the revolution, was fixated on all things Egyptian.

The last half of Dolnick’s tale focuses on the race between the two, marked by surface cordiality and behind-the-scenes back-stabbing. Young deduced that a sequence of pictographs contained inside an oval frame, or cartouche, spelled “Ptolemy.” Yet he couldn’t make the next leap, recognizing that the writing system was mostly a phonetic alphabet. Champollion drew on his fluency in Coptic — descended from ancient Egyptian — to tease out letters, syllables and larger meanings.

“This was ‘Wheel of Fortune’ without Vanna White,” Dolnick writes with typical breeziness, “but with a prize of eternal fame.” From that point, the millenniums-long battle was largely won. But Dolnick’s stirring account makes it clear that both decoders deserve scholarly immortality.