The glorious gamble that sparked Hitler’s downfall: The Allies’ capture of Sicily in 38 days was the beginning of the end for the Third Reich, thanks to the heroic troops who fought for every hilltop town, new book reveals

Sicily was a tough nut to crack for the Allied forces from Britain, Canada and the U.S., who landed on the enemy-occupied Mediterranean island in the blistering summer of 1943.

In his dispatches, war correspondent Ernie Pyle complained bitterly about ‘the perpetual, choking dust, the heat and the flies and dirty feet, the go, go, go night and day…. When will we ever stop? God, I’m so tired.’

Canadian Lieutenant Farley Mowat quickly came to loathe the place. ‘This country is absolutely foul,’ he wrote, ‘hot as hell in the day and icy cold at night.’

He was appalled by the primitive conditions. 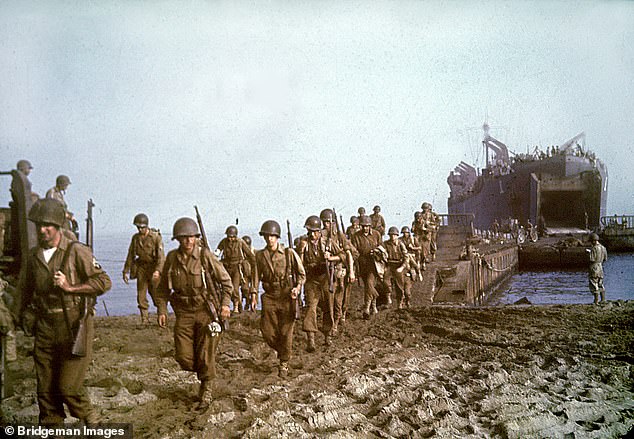 Allied forces from Britain, Canada and the U.S. captured Nazi-occupied Sicily in a record 38 days in the summer of 1943 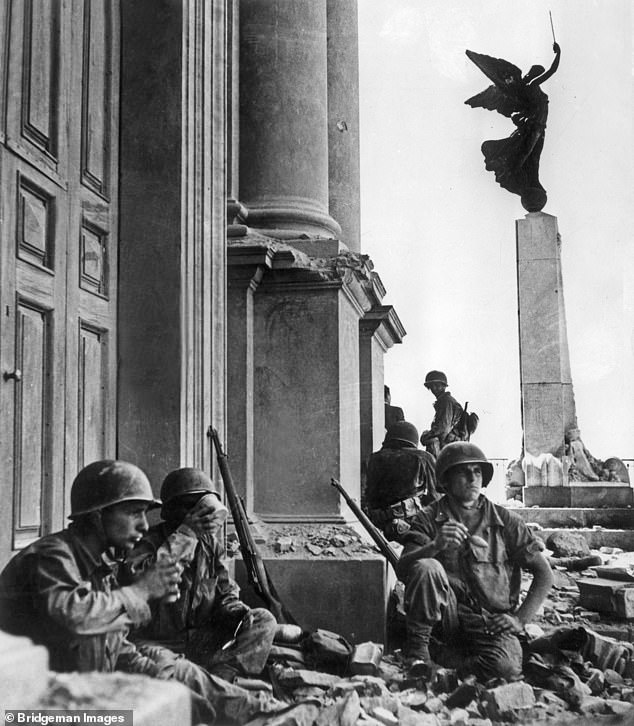 ‘Towns are few and scruffy, always perched on hills like ravens’ nests and the stink has been collecting in them since the year dot.’

This rough, mountainous land was anathema to modern armies with their tanks and troop carriers.

In the end, it came down to old-fashioned foot-slogging by the poor bloody infantry, with an occasional mule or two to help with the load.

And all the while, as they fought the island’s Italian defenders and their German allies (who had been building up their forces there since the spring), they were plagued by disease-carrying mosquitoes: more than 20,000 Allied troops went down with malaria — more than were killed or wounded in battle.

And yet, for all the hardship, Sicily not only fell but did so in record time. In just 38 days, the volcanic island off the foot of Italy was conquered, its surviving defenders forced to flee back to the mainland.

It was a giant step forward for the Allies, but one that has been largely overshadowed by the D-Day invasion of Normandy.

On the anniversary of Operation Overlord in June 1944 we bow our heads in remembrance, but Operation Husky, as it was designated, goes unremarked, even though it is still one of the largest amphibious assaults, with 160,000 troops put ashore on that first day in 1943.

James Holland —among the very best chroniclers of World War II — sets the record straight in his new book, arguing that the conquest of Sicily deserves recognition as the first successful inroad by the Allies on Hitler’s Fortress Europe since the dark days of defeat at Dunkirk in 1940. 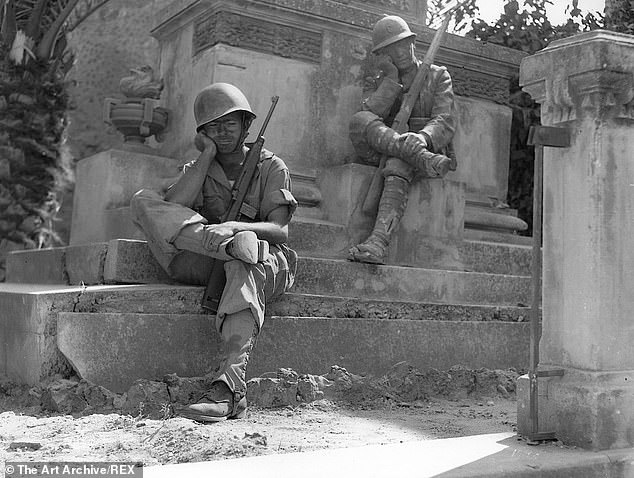 The victory came down to old-fashioned foot-slogging by the poor bloody infantry, with an occasional mule or two to help with the load. Pictured: A U.S. soldier rests on a memorial to an Italian soldier from the First World War

From that point on, the Fuhrer’s days were numbered. On the Eastern front, his armies were in retreat from the Russians and now his southern flank was breached.

The fall of Sicily can justly be described as the beginning of the end of the Third Reich.

Yet it was a massive gamble: a vast armada of ships steaming from North Africa to dump battalion after battalion of troops on the beaches, shielded by a massive naval bombardment out at sea.

Gliders and parachutists also dropped from the skies.

Hitler and Mussolini were never comfortable bedfellows. Nor were their people: Italians distrusted the Germans.

The Germans rightly thought the Italians lacked the bottle to fight.

This was a view shared by the invaders. Whole Italian companies would surrender without a shot being fired, so the Allies made relatively easy progress as they poured on to the island.

This changed when German generals took charge of its defence: ‘Jerry is moving south to meet us,’ noted Mowat ominously, ‘and he is a horse of another colour.’ 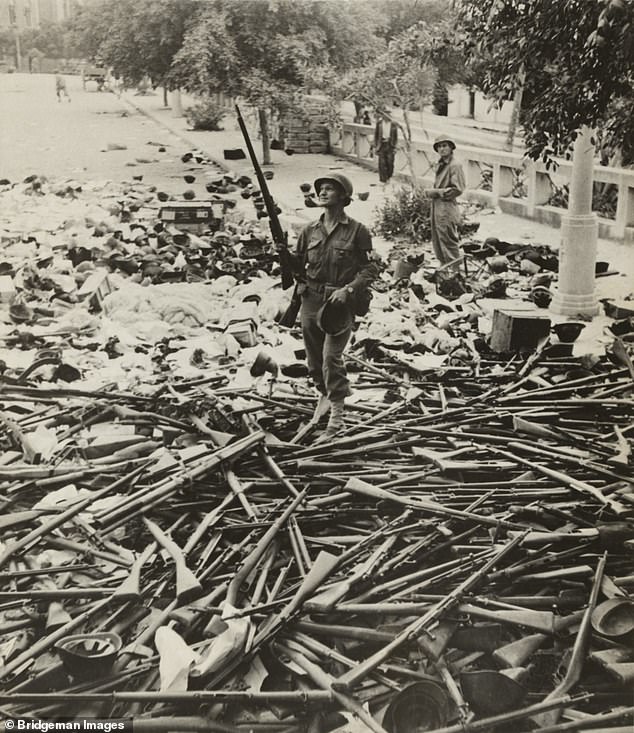 Sicily fell in record time and its surviving defenders forced to flee back to the mainland. Pictured: An American soldier stands on a large pile of seized Italian weapons 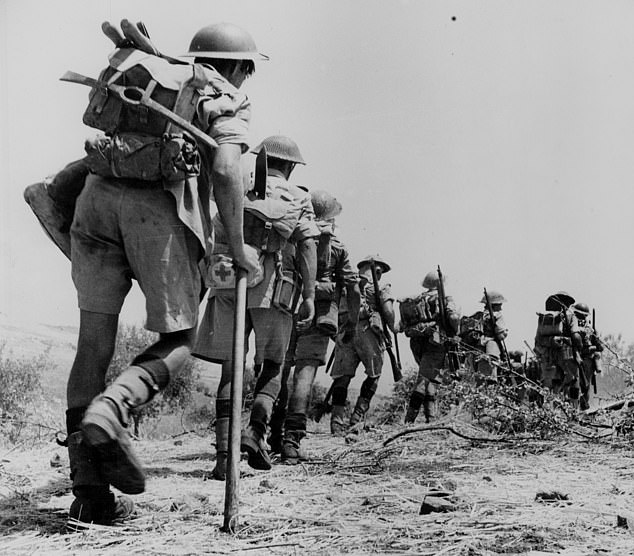 Now the battle began in earnest, turning Sicily into a cauldron of destruction that would cost the lives of 5,500 Allied troops and 9,000 Germans and Italians.

Assoro was a typical battleground. A stronghold since Greek and Roman times, it was a terracotta-roofed town some 2,000ft up.

Sole access was by a single winding road full of hairpin bends.

It fell to Major John Tweedsmuir, son of the adventure novelist John Buchan, to conquer it with his brigade of 500 Canadians. 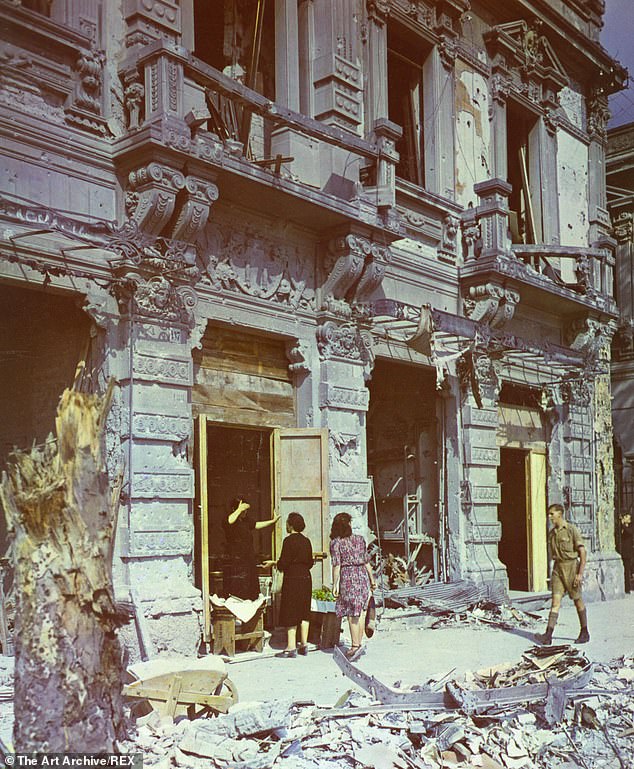 The fall of Sicily can justly be described as the beginning of the end of the Third Reich. Yet it was a massive gamble

Assoro’s defenders felt it was impregnable, but an eagle-eyed officer spotted a steep-sided gully winding its way up the eastern flank of the hill, out of sight of the defenders.

An assault team was detailed to make its way up under cover of darkness.

Ledge by ledge, rock by rock, the men hauled themselves up. Dawn was breaking as they cleared the top and found themselves facing a group of astonished German soldiers.

One went for his gun and was cut down; the rest put up their hands in surrender.

More Canadians appeared and sprayed the ambushed German forces in the town below with machine guns. 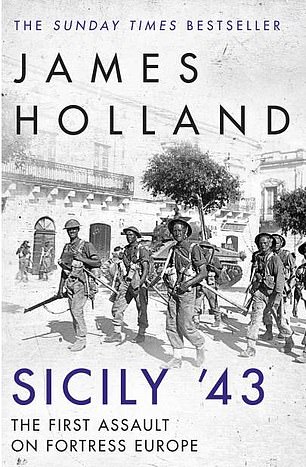 A bloody 24-hour battle ensued in the streets, but Tweedsmuir’s daring had given his men the edge and, with more Allied Forces arriving, the Germans pulled out. It was a victory to savour.

A proud Tweedsmuir quoted Shakespeare to himself: ‘And gentlemen in England now abed shall think themselves accursed they were not here.’

‘Impregnable’ Assoro had been taken. Soon the whole of Sicily would go the same way as the Allies secured that crucial first foothold in Europe.

There were, though, as Holland acknowledges, some serious blemishes on the success of the Sicily campaign.

A U.S. sergeant massacred dozens of Italian and German prisoners-of-war in cold blood, in retribution, he said, for two American soldiers he’d seen killed by their German captors.

He was court-martialled for murder.

Another blot on the campaign was that, after the fighting, as the Allied armies moved on to their next targets on the Italian mainland, the power vacuum on the now devastated island reverted to the Mafia.

This secret criminal organisation had been largely suppressed under Mussolini, but now reared its ugly head again. It has, says Holland ruefully, never gone away.