The Fate of the Self in the Age of Clicks 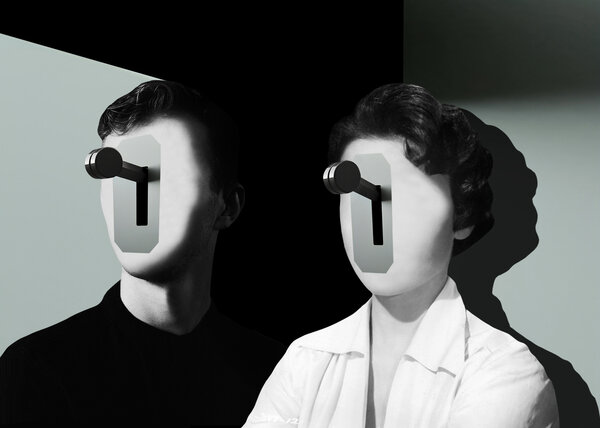 Imagine sitting down to a game of Go, not in a cafe or a park, where you could banter with your adversary or discuss strategy with onlookers, but alone in front of a screen. Your opponent is not a person but an algorithm, AlphaGo, a program created by Google’s machine-learning subsidiary, DeepMind. Squinting into the cool glare of your monitor, you manipulate digital pieces. You touch nothing tangible: You are unable to scrutinize the expressions of your faceless competitor.

These, roughly, are the strange and surgical circumstances under which Lee Sedol, one of the best Go players in the world, was vanquished in a best-of-five match in 2016. As the essayist and cultural critic Meghan O’Gieblyn reports in her nimble new book, “God, Human, Animal, Machine: Technology, Metaphor, and the Search for Meaning,” one former Go champion watched the game and exclaimed that AlphaGo’s winning maneuver was “not a human move.” It is not immediately clear how we, being humans, ought to react to such alien stratagems. We might be awed by the AlphaGo’s icy efficiency — but then, we might also wonder why anyone would bother playing against a computer. After all, many of us play games not primarily to win or lose, but also to enter into a community with other human players, or for the sheer pleasure of untangling conceptual knots. I don’t know why an algorithm participates in a Go tournament, or if it can be said to have what we would call a “reason” — but I know that most people enjoy games because they value the process, not just the outcome, of playing.

In this respect, games resemble most of our cherished ventures, almost all of which matter to us in part because they have some bearing on the texture of our inner lives. Yet many of the most powerful forces in the contemporary world conspire to deny the value — and even the existence — of experience that evades quantification. The architects of our digital landscape see people in terms not of personalities but of trackable clicks. “God, Human, Animal, Machine” represents a canny rejoinder to the bankrupt “philosophy of selfhood that has characterized information technologies since the early days of cybernetics — the notion that a person can be described purely in terms of pattern and probabilities, without any concern for interiority.” O’Gieblyn’s loosely linked and rigorously thoughtful meditations on technology, humanity and religion mount a convincing and occasionally moving apologia for that ineliminable wrench in the system, the element that not only browses and buys but feels: the embattled, anachronistic and indispensable self.

How, exactly, did we end up so intent on expunging qualitative experience from respectable inquiry?

Silicon Valley’s recent efforts to eliminate the first-person perspective are part and parcel of a much older quest for objectivity that O’Gieblyn traces back to the Enlightenment, which “was founded on the total irreconcilability of mind and matter.” If mind is insulated from matter, and science is strictly materialist, then the mind is placed beyond the purview of discussion. The result is disenchantment, the process by which “everything in modern life, from our minds to the rotation of the planets, can be reduced to the causal mechanism of physical laws.” We are left to inhabit “an empty carapace of gears and levers.”

The self is also a casualty of bad analogies. “God, Human, Animal, Machine” opens with an anecdote about how O’Gieblyn developed an affectionate attachment to Aibo, Sony’s $3,000 robotic dog. “It is impossible to pet an object and address it verbally without coming to regard it in some sense as sentient,” she reflects. But as we read ourselves into computers, we read computers back into ourselves, with disastrous consequences. As early as the 1940s, the pioneering cyberneticists Warren McCulloch and Walter Pitts were defending the “computational theory of mind,” according to which “the human mind functioned, on the neural level, much like a Turing machine.” In other words, the mind did not function like a mind at all: It functioned like a mechanism.

But as O’Gieblyn argues, the ghost still haunts the machine. The self resists exile, creeping back into even ostensibly materialist theories. Many of the tech-utopians who congratulate themselves most vociferously on their affinity with the Enlightenment subscribe to quasi-religious worldviews — a phenomenon that O’Gieblyn, who grew up in a Christian fundamentalist family, is well equipped to analyze. Take, for instance, transhumanism, according to which “the evolution of the cosmos comes down to a single process: that of information becoming organized into increasingly complex forms of intelligence.” For those who see “processes as disparate as forests, genes and cellular structures” as forms of computation — as means of transmitting information — our world is re-enchanted. Everything is potent with significance, and history is a “process of revelation,” culminating in the elevation of humans into “‘post-humans,’ or spiritual machines.”

Perhaps the best way to fight transhumanism and ideologies like it is simply to inhabit our humanity as stubbornly as possible. “God, Human, Animal, Machine” is a hybrid beast, a remarkably erudite work of history, criticism and philosophy, but it is also, crucially, a memoir. O’Gieblyn knows that personal writing is “often dismissed as unserious or egotistical,” but her “I” is not the indulgent “I” of the confessional foray, nor the strident “I” of liberalism: It is the humble “I” of human scale and perspective. “The ‘I’ was not an expression of hubris but a necessary limitation,” she writes. “It was a way to narrow my frame of reference and acknowledge that I was speaking from a particular location, from that modest and grounded place we call ‘point of view.’” For all our posturing, beings like us could scarcely hope to speak from anywhere else.