The Joys of Approaching Life as an Amateur

Early in his new book, “Beginners,” the journalist Tom Vanderbilt finds himself unexpectedly adopting the role of a stereotypical “chess dad.” His daughter, who casually picked up the game at the age of 4, had become a serious enough player to enter scholastic tournaments. Vanderbilt was soon spending long weekend days with the other jangled-nerved parents, distracting themselves with smartphones on the periphery of the action. This same dynamic, he notes, plays out regularly in the world of children’s activities: We prioritize our kids being exposed to new challenges and developing new skills, while we are content ourselves to sink into middle-age stagnation, centering our professional lives on existing competencies and outsourcing our leisure to the low-friction distraction offered by our devices.

Vanderbilt becomes frustrated with the parental malaise surrounding him at his daughter’s tournaments. “Seeing someone playing Angry Birds, I want to tap them on the shoulder and say, ‘Why are you having kids do chess while you do that?’” he writes. Determined to reverse this trend, Vanderbilt starts playing chess himself: entering beginners’ tournaments, occasionally even drawing matches against his own daughter. Inspired by the resulting sense of cognitive rejuvenation — the “beginner’s mind,” he explains, is one in which the ego dissolves and the world becomes once again interesting — he launches an ambitious curriculum of skill development, focusing primarily on chess, singing, surfing, juggling and drawing, with briefer diversions into open-water swimming and jewelry crafting. 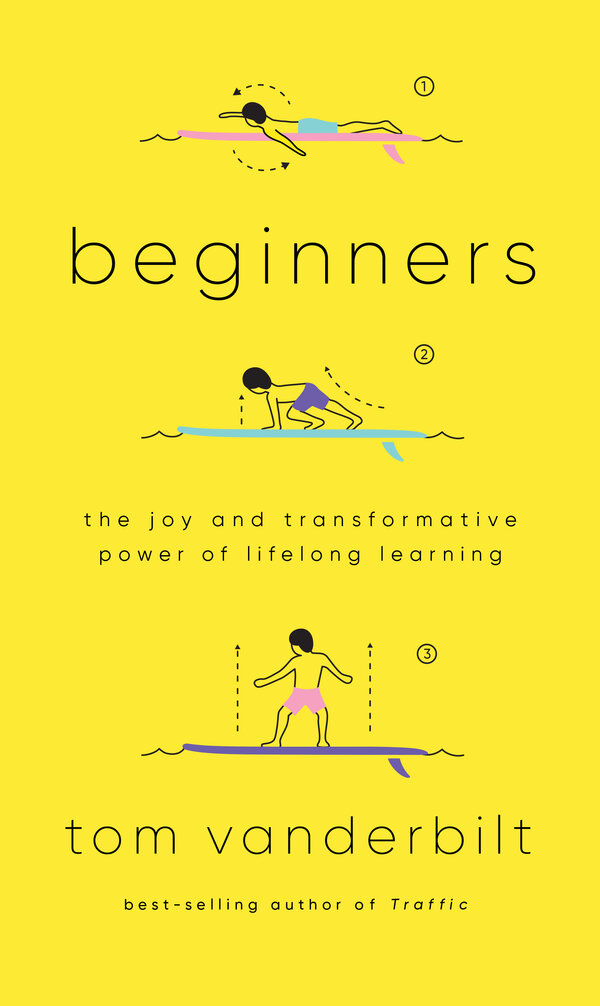 Following a standard trope, Vanderbilt dedicates a chapter or so to each pursuit, using his personal narrative, rich in obligatory self-deprecation and infectious excitement, to introduce relevant scientific studies. As we hear about Vanderbilt’s first sweat-soaked lessons with a vocal coach, for example, we also learn that singing activates the vagus nerve in a way that helps the brain regulate heart rate, blood pressure and digestion. In the chapter on surfing, we’re introduced to Stuart and Hubert Dreyfus’s highly cited five-stage model of skill acquisition. Though this style of structuring a book may be standard, Vanderbilt deploys it effectively, relying on a keen instinct for interesting characters and a willingness to let stories unfold at their own pace. The result is an entertaining read that avoids the trap of forced anecdotes and excessive contrarianism that plague lesser titles in the genre.

When read against the backdrop of the current pandemic, however, “Beginners” attains a deeper level of meaning. “I achieved modest competency in a number of things to which I’d long been attracted,” Vanderbilt writes near the end of the book. “But doing these things brought me an immense and almost forgotten kind of pleasure.” Though this quest for self-improvement may at first seem excessively inward in its focus, Vanderbilt reveals that it instead turned him outward — exposing him to new people and new experiences. It also reacquainted him with the often-overlooked joys of the analog. When so much of our lives involves “pushing electrons,” taming the trajectory of a juggling ball can be surprisingly satisfying.

As we spent most of 2020 increasingly cut off from the outside world, turning more and more to the easy diversion of the digital to compensate for the persistent sting of loss, “Beginners,” which documents a time before the pandemic arrived, unintentionally provides a primer of sorts for re-engaging with life. When society reopens, we could do worse than to find new pursuits to embrace with the open-minded zeal of a child; to rediscover the intrinsic wonders of the world through the eyes of a beginner.