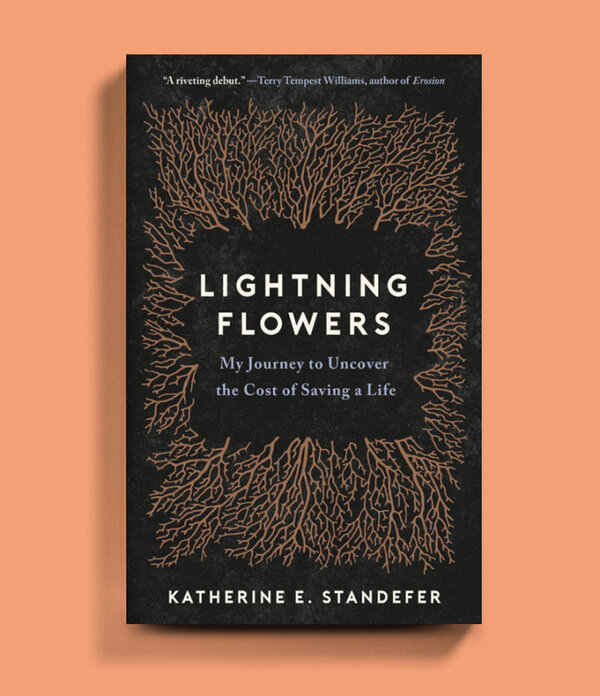 Welcome to Group Text, a monthly column for readers and book clubs about the novels, memoirs and short-story collections that make you want to talk, ask questions, and dwell in another world for a little bit longer.

When Katherine Standefer was shocked by the defibrillator that monitored her genetic heart condition, she started questioning how the device was made and whether or not it was necessary. “Lightning Flowers” is a memoir of her search for answers.

From heart surgery and family dynamics to health insurance and cobalt mining, Standefer provides readers with a bonanza of personal, ethical and environmental dilemmas to mull over, preferably as she did: surrounded by loyal friends.

I don’t usually read with a pen in hand, but I circled, underlined and highlighted my way through LIGHTNING FLOWERS (Little, Brown Spark, 288 pp., $28), Katherine E. Standefer’s sprawling memoir. If you’ve ever felt overwhelmed by a scary diagnosis, are tired of quarterbacking your own health care or simply need company while on hold with a doctor’s office, this book will make you feel less alone. Pick it up and you will hear a human voice.

Standefer’s foray into the medical establishment started simply enough. In 2009, after months of ignoring breathlessness and a hammering sensation in her chest, she was told she had long QT syndrome, a hereditary cardiac condition that leads to an irregular heartbeat. She writes, “The inconsistency can go unnoticed — a slight palpitation, maybe — or it can cause the rhythm of the heart to spin out of control, unable to pump in the firm, organized manner that gets blood oxygenated and out to the limbs and organs. A heart that quivers instead of pumps fails to get oxygen to the brain.”

At the time, Standefer was a skiing instructor and climbing guide who lived with her sporty boyfriend in Jackson, Wyo. She’d let her health insurance lapse: “The only sick people I knew were old.” One doctor prescribed beta-blockers and offhandedly advised her to give up any physical activity more strenuous than “light tennis” or golf. Another recommended a defibrillator; he had treated Standefer’s sister for the same disorder. When a nurse warned that the surgery could cost as much as $180,000, Standefer understood “that there was not going to be a way to salvage the life I’d been living.” She was an official citizen of Hospital Land, which is equal parts purgatory and labyrinth, with glimpses of humanity along the way.

“Lightning Flowers” walks readers through the painstaking steps Standefer took to get her defibrillator. She moved to Boulder, Colo., where she established residency in hopes of getting assistance from the Colorado Indigent Care Program. She found a job with decent health insurance. She located an affordable apartment where she could recuperate. She lined up friends and family who would assist.

Of course, there were roadblocks and setbacks. Her recovery did not go smoothly; her boyfriend wasn’t in it for the long haul. Standefer quickly developed a complicated relationship with the device nestled in a handmade pocket between her pectoral muscle and skin: “There is no natural place in the body for a titanium box.”

Three years later, while she was playing soccer, the device shocked her three times, hitting her heart with 2,000 volts of electricity and leaving her with an understandable, debilitating fear of feeling that “hot whip” again.

This is when Standefer really began to consider the cost of the defibrillator — not just in terms of her own peace of mind, but also the toll it’s taken on the environment. She was haunted by the idea that her device contains “conflict minerals,” the ill-gotten gains of greedy miners. We join her on a pilgrimage to the manufacturing facility in Sylmar, Calif., where she hoped to figure out “whether the thing in my body was worth making.” And then on to Madagascar, as she tours a nickel and cobalt mine, “trying to understand what it took to pull metal from the ground”; and finally to Rwanda, to a mine that produces ilmenite, the mineral that becomes titanium. She writes, “I had a titanium can at the top of my left breast. I had to visit.”

Standefer alternates investigative chapters with passages about her personal life, including career changes, financial worries and her struggle to build an independent adult life while enduring endless medical travails. I preferred these chapters to the journalistic ones, not because the travel stories weren’t gripping, but because I couldn’t get enough of Standefer’s unsinkable spirit and eye for little moments of grace — for instance, her dad reading to her from “A Light in the Attic,” by Shel Silverstein. “The sound of his voice made me want to cry out of sweetness,” she writes. “But instead I settled back into it. I took careful, measured breaths into the deepest parts of my lungs.”

Standefer is — and I mean this as the highest compliment — like a dog with a bone. She will not rest until she has answers. Her quest made me wonder, what if we all questioned our impact on the planet with such determination? What if we insisted on following lines that connect us to other parts of a bigger picture? “Lightning Flowers” may inspire you to launch a quest of your own. Don’t forget to pack the original multipurpose tool: a pen.

[ Read an excerpt from “Lightning Flowers.” ]

How does Katherine Standefer’s age work to her advantage and disadvantage as her story unfolds? How is her case a microcosm of the state of health care in our country?

Was there a moment in this book when you felt the solution was worse than the problem? If so, when? Would you have chosen to do anything differently?

“Brain on Fire,” by Susannah Cahalan. A reporter recalls her descent into what appeared to be madness but was, in fact, something else altogether. Like Standefer, she describes the loneliness of being “an interesting case.”

“Inferno,” by Catherine Cho. Cho’s memoir toggles back and forth between her darkest days with postpartum psychosis and the events that led her to a psychiatric hospital for treatment. Her journey is an indictment of the culture of whispers around mothers and mental illness.