Three New Books That Stare Up at the Stars

THE HUMAN COSMOS
Civilization and the Stars
By Jo Marchant
386 pp. Dutton. $28. 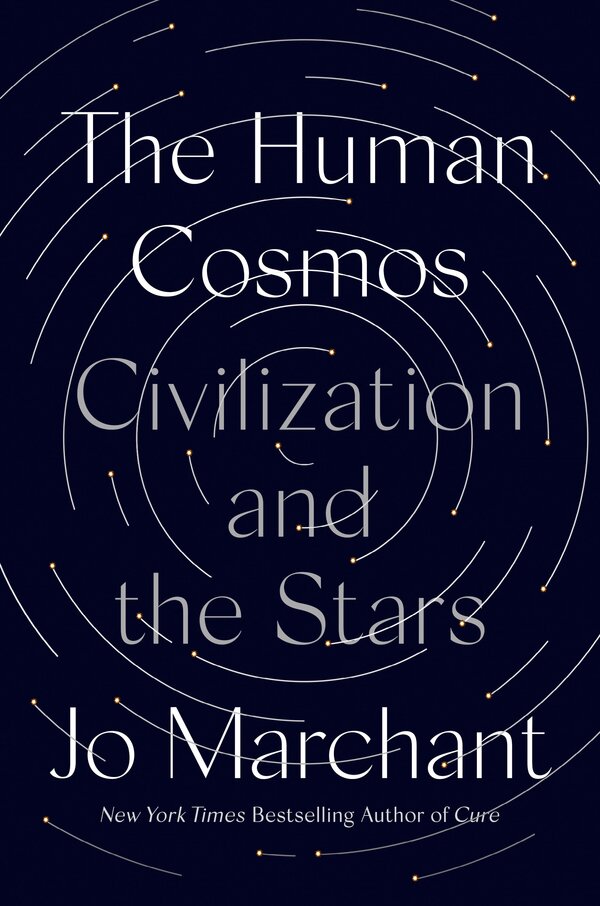 It’s easy to forget, but for most of human history, the night sky was the best show around. Barring cloud cover, the ethereal haze of the Milky Way dominated as neighbor planets shone among stars too numerous to count. Meteors injected drama with their fiery trails. The moon, in its regularity, marked the passing of month and season. The dynamic night sky was ever-present, and as such played a crucial role in the development of art, agriculture, science, religion, politics and more, argues Marchant, a science journalist, in “The Human Cosmos.” Outer space and humanity’s relationship to it, she writes, is foundational, even inextricable, from culture itself.

Marchant’s story starts on the walls of Lascaux cave in southwestern France, discovered in 1940, adorned with pigment depicting animals like bulls and ibexes. Scholars have argued over the meaning of the paintings, which could have been created as far back as 37,000 years ago, with some believing they were “art for art’s sake.” But more recent interpretations support the idea that the paintings were fertility calendars for animals, connecting them with constellations prominent during mating season. If it’s correct, the earliest known markings left by humans provide a direct line from Earth to the sky, humanity to the cosmos.

From here, Marchant takes the reader on a ride through Western civilization. We learn of Babylonian scholars and the ancient Greeks. Marchant details the fascinating difference between star maps used by Polynesians who settled on islands throughout the vast Pacific over thousands of years, and the approach of Western explorers like Cook.

Marchant is a deft writer. Her characters are vivid, and her stories flow. The unexpected connections she makes between, for instance, a person on LSD and an astronaut’s experience being in space — both report feelings of otherworldly interconnectedness — are often quite satisfying.

“The Human Cosmos” is a reminder that the forces that shape humanity far precede modern people and will persist long after we’re gone. “There’s nothing bigger than the cosmos,” Marchant writes.

THE SECRET LIVES OF PLANETS

A few years back, a Martian dust devil made news. The Curiosity rover had snapped a series of gray-scale shots of a ghostly white spout moving past the camera and then out of view behind a hill. It wasn’t the first time extraterrestrial weather had been captured by a rover or probe, but it felt like a particularly charming moment for a planet that many people assume to be a lifeless, inert rock.

“The Secret Lives of Planets,” like those dust-devil photos, is also a charmer. Murdin is an astronomer and his descriptions are clear and sentences precise. While various scientists make appearances throughout, it’s not the human personalities that are the main draw. The author trains his attention on the discoveries themselves and descriptions of the evolution, day-to-day activity and projected future conditions of our planetary neighbors as well as our home base. There’s surprisingly enough drama in these details to keep a space-minded reader turning the pages.

In “Secret Lives,” all planets, including dwarf planets like Pluto, the asteroids Ceres and Vesta, and the major moons of the solar system get their own chapters, which felt great. Just because a celestial body doesn’t quite meet current planetary requirements doesn’t mean it’s not a fascinating place to visit.

Ceres, for instance, is the largest globe in the agglomeration of asteroids just beyond Mars. It was on its way to becoming a full-size planet, but Jupiter’s looming presence (gravity) kept it from collecting more material. “Arrested development,” the author writes. A reader learns that Jupiter, itself a roiling ball of gases and the biggest planet of them all, would have become a star with only 30 percent more mass.

Perhaps one of the most exciting recent planetary rendezvous of the past few years has been the 2015 flyby of the New Horizons probe with Pluto, an almost complete planetary mystery until recently. The probe captured stunning landscapes: mountains made of water ice, glaciers made of nitrogen and winds that carry methane snowflakes. It’s a beautiful, chilling scene, and one that redoubled my gratitude for home.

METEORITE
How Stones From Outer Space Made Our World
By Tim Gregory
299 pp. Basic Books. $30.

Gregory is a geologist with an enthusiasm for storytelling. His “Meteorite” covers both cultural and scientific history and the present-day study of the fireballs that screech through the atmosphere, explode above and crater our planet, revealing secrets of how our solar system came to be. Meteorite hunters chase the remnants all over the globe to be sold at a cost that, per ounce, often exceeds the value of gold.

Humanity has a long history of using and revering meteorite material. In the early 1900s, archaeologists at a site in Iran discovered metal beads made of iron that predate the Iron Age by 3,000 years. How? Modern analysis revealed the beads’ material came from space, specifically chunks of rock that reside in the asteroid belt between Mars and Jupiter. “There is something stirring about humanity’s first contact with iron — a metal that so much of our civilization is built upon — being iron of a celestial origin,” the author writes.

One of the main allures of meteorites to scientists, Gregory explains, is the fact that most of them are like clocks frozen an instant into the formation of the solar system. Earth rocks can take a geologist only so far, giving just a partial story of our planet’s origins. But meteorites still contain flecks of dust from the first millions of years of our solar system’s life, a snapshot of all that came before any planets coalesced.

At the moment, a robotic probe called OSIRIS-REx is on its way back from a close encounter with an asteroid named Bennu where it scooped a sample of soil to be analyzed in late 2023 here on Earth. Reports from space indicate that the sample container was so full it’s not been able to completely close; material is being shed in transit. But if all goes well, there will still be enough dirt and rock left for scientists to analyze a kind of pristine meteorite — one that’s avoided the heat of re-entry through the Earth’s atmosphere and will be able to tell us so much.