To This Essayist and Cultural Critic, the Black Tradition Is Resistance

WHO WILL PAY REPARATIONS ON MY SOUL?
Essays
By Jesse McCarthy

Jesse McCarthy welcomes everyone to read “Who Will Pay Reparations on My Soul?,” but he’s expressly keen to reach “the younger generations struggling right now to find their footing in a deeply troubled world.” Some of that potential readership came of age in the period bookended by the police killings of Michael Brown, in 2014, and both Breonna Taylor and George Floyd, in 2020 — the same period during which McCarthy wrote the essays in this stunning debut collection. For African-Americans in particular, these were years that yielded much about which to despair, and no doubt much despairing occurred, and does still. The risk of succumbing to that despair is real; but doing so would be at odds with the Black tradition. The Black tradition, McCarthy understands, is resistance.

Its most visible form perhaps is social and political activism — the Black Lives Matter movement, as a recent example, arose in direct response to the 2012 killing of Trayvon Martin. But, as McCarthy illustrates, Black resistance just as often happens in the arts, the church, the academy, the streets. All are required. What the author — an assistant professor of English and African-American studies at Harvard — mainly hopes to convey is “the basic premise that nothing is outside of our purview, that there are no limits to the ideas, realms of knowledge, creative traditions or political histories that we can lay claim to and incorporate.” Further, he stresses that “the knowledge of the accumulated genius of our literary, intellectual, political and religious traditions is crucial to determining a course not only through the present crisis, but through those still to come.”

“Who Will Pay Reparations on My Soul?” is a representative sample of that genius. McCarthy’s analyses and observations are masterfully articulated, as are his dissents — for instance his convincingly explained, personal decision to resist the trend of capitalizing “Black” in reference to the community to which he happens to belong, in part because of the precedent set by Toni Morrison.

McCarthy’s essays are richly varied, and one surmises the abundant intersections of art and race were in large measure informed by his own experiences growing up Black in America and in France. Topics range from the troubling lessons gleaned from the 2015 Bataclan massacre in Paris; to the globalization of Harlem’s artistic mecca; to trap, or, as McCarthy aptly describes it, “the funeral music that the Reagan revolution deserves.” He asks what Kara Walker’s colossal 2014 sphinx sculpture, entitled “A Subtlety, or the Marvelous Sugar Baby,” says about history; profiles the influential poet and scholar Fred Moten; and composes an “open letter” to the R&B artist D’Angelo, whose 2014 album, “Black Messiah,” McCarthy observes, “speaks plainly to the unquenchable, unmistakable sweetness of black life.” 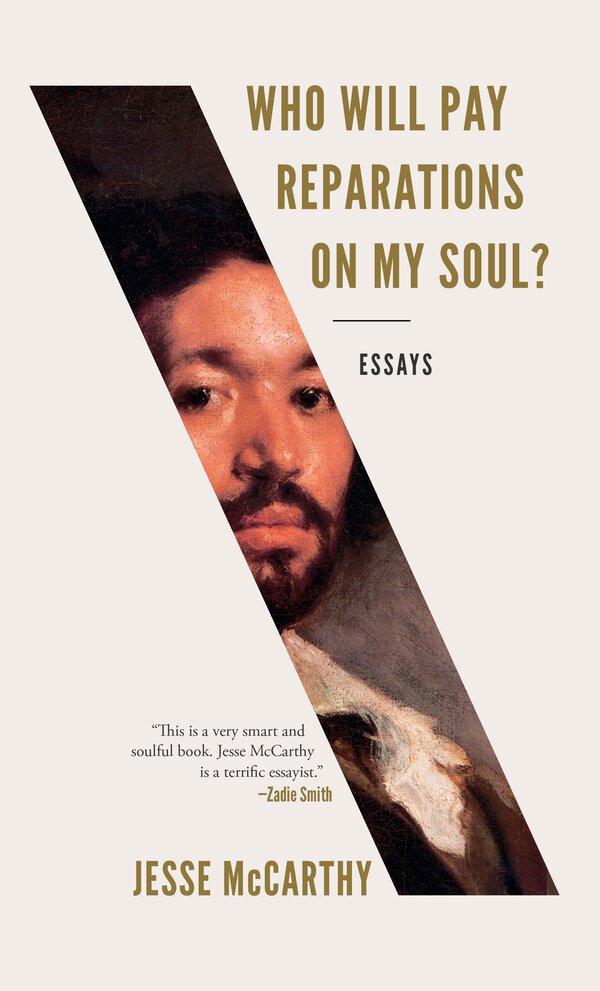 Importantly, McCarthy dedicates some plainspeak to the “unquenchable, unmistakable” bittersweetness of Black life, too. Consider, for instance, as he notes in “Language and the Black Intellectual Tradition,” how the abolitionist David Walker responded to the antebellum suggestion of sending Black people back to Africa: “America is more our country, than it is the whites — we have enriched it with our blood and tears,” he wrote in 1829. “The greatest riches in all America have arisen from our blood and tears: — and will they drive us from our property and homes, which we have earned with our blood?” Black Americans would not be driven from their property and homes and sent anywhere. To the contrary, they would, over time, acquire homes and properties that were once denied them.

These acquisitions were, are, a kind of appropriation, a laying of claim. And appropriation has been a key form of Black resistance not only materially but also artistically. In the first essay in the book, “The Master’s Tools,” McCarthy takes as his primary example Kehinde Wiley’s 2005 painting “Napoleon Leading the Army Over the Alps,” which depicts a Black man in contemporary urban attire posing on a horse as the French emperor — a remix of Jacques-Louis David’s 1801 portrait of “Bonaparte Crossing the Alps.” Then there’s the Spanish slave Juan de Pareja, who upon gaining his freedom put brush to canvas as if he too were a member of the royal court, just like his former owner, Diego Velázquez. And in their 2018 music video for “Apeshit,” Jay-Z and Beyoncé actually hold court in the Louvre, an act alone that requires a reconception of the masterpieces therein. “Harnessing the instruments of power to a distinctly insurgent posture,” McCarthy writes of their subversion, “is not only done to protest discrimination; it also signals the intervention of a new intelligence, a spirit in the process of discovering the true extent of its untapped potential.”

Written language, of course, is another such instrument of power, whose potential, when fully tapped, begets such authors as Colson Whitehead, John Edgar Wideman, Claudia Rankine, Terrance Hayes, Phillis Wheatley and Toni Morrison. McCarthy offers close reads of them all, but Morrison’s moral and social criticism and the Black humanist tradition in which she wrote are the underpinning of this collection. It’s distinctly evident in the title essay, wherein McCarthy argues against monetary recompense for slavery. “Black American music has always insisted upon soul, the value of the human spirit,” he writes. “It’s a value that explicitly refuses material boundaries or limitations.”

Here he engages in direct conversation with Ta-Nehisi Coates’s 2014 essay “A Case for Reparations,” although the rebuke is mild; McCarthy agrees with Coates that even if it’s not money, something is owed to the descendants of enslaved people. Less mild is McCarthy’s criticism that as an intellectual working in the Black radical tradition, Coates has fallen short. In reference to Coates’s “fatalism,” McCarthy writes: “Like all those who have taken up the pen to strike at America’s racial injustice, he is also the inheritor of a proud tradition that has relentlessly and defiantly believed that we have it in our means to break the spell of oppression, and that speaking truth to power is not an act of despair, but one of candescence.” It is not enough to diagnose social ills, McCarthy says; one must emphasize our resourcefulness in overcoming them.

McCarthy’s strongest rebuke, however, is reserved for Frank Wilderson, who, in his recent philosophical memoir, “Afropessimism,” argues that Black people today are still enslaved, that the plantation is inescapable. On the contrary, McCarthy says, Black Americans today “are once again trying to save the country.” In what he calls a longstanding pattern, “the ‘colored citizens’ of this country are at the forefront of practicing civics.”

With a younger readership at the top of his mind but an open invitation to all, McCarthy seems determined to draw attention to African-Americans’ “true strength” and “worth.” He well knows that if despair brought on by a troubled world is to be kept in check, the right prescriptions must be offered, the right traditions advanced, the right lessons drawn, and from the right people. “What would Frantz Fanon, or David Walker, or Ella Baker tell us if they saw the streets today?” he asks at the end of his critique of Wilderson. “Surely, not that we are at an impasse against an implacable enemy. They would insist that we lift each other and rise together with the spirit of history at our backs. We have done it before. Every time we do it’s a new day.”