Want Kids to Learn the Joy of Reading? Barbershops and Laundromats Can Help

At dozens of barbershops and laundromats across the United States, the sound of children reading aloud mingles with the buzz and snip from barbers’ tools or the din of washers. Makeshift shelves and crates hold books featuring cartoon characters, stories about pigeons or the capers of superheroes.

This developing movement, supported by nonprofit groups, entrepreneurs, libraries and community fund-raising, is redefining the borders of traditional neighborhood public libraries by creating literary spaces in places where children find themselves with time on their hands.

It is bringing the book to the child, instead of the child to the book.

Most of these patchwork libraries have found root in laundromats and salons that already served as drop-in meeting spots in economically struggling neighborhoods. Some children are encouraged to read out loud while getting their hair cut, or they are given incentives like snacks or a few dollars to read.

At Cutz Lounge the Grooming Shop in Detroit, the owner, Dante Williams, 41, has sectioned off a corner of his 4,000-square-foot business with couches, where adults stop by and gossip or share news. A rack of books is strategically placed at eye level for children, featuring “Don’t Let the Pigeon Stay Up Late” by Mo Willems, “Cloudy With a Chance of Meatballs” by Judi and Ron Barrett, and volumes from the “Captain Underpants” series.

Hopefully, Mr. Williams said, children will be enticed to embark on the simple but potentially life-inspiring gesture of opening and falling in love with a book.

“Sometimes you do have to purposely tell the kids, ‘Hey, grab a book,’” Mr. Williams said. “I like to put it in their hands and say, ‘Hey, look at this.’ It encourages them a little bit.” 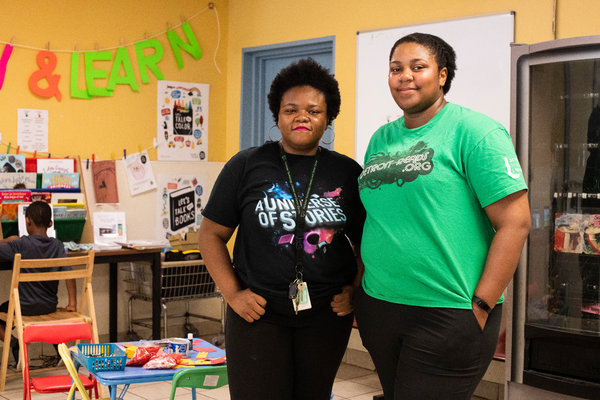 Sometimes the children take the books home, an unintended but welcomed result.

Mr. Williams’s barbershop is supplied by Barbershop Books, a children’s barbershop literacy project that started in Harlem in 2014. Alvin Irby, the founder, had been inspired by the role barbershops play as meeting places in city neighborhoods, and wanted to focus specifically on improving reading rates for black boys when they are very young.

“The first time some of them will interact with a book will be in a barbershop,” he said.

Mr. Irby, who had been an elementary teacher in the Bronx during the 2008-9 school year, was getting his hair cut near the school when one of his first-grade students came in. “He was sitting there and started getting antsy,” he said. “I thought he should be practicing his reading and I wished I had a book to give him.”

Mr. Irby’s nonprofit group, sponsored by school districts, libraries and individual donors, has helped install books in 185 barbershops in 44 cities in 20 states. It also provides training in early literacy for barbers, and is developing a similar program for beauty salons, he said.

Laundromats, where families often spend an hour or two at a time waiting around, are also an ideal location for ensnaring children’s attention.

Family Laundry in Oakland, Calif., functions as a hub of activism and literacy for a multicultural community.

Laura Guevara, an owner of the laundromat, said that this year a literacy program, aided by grants, the local library and a nonprofit group called Libraries Without Borders, helped stock books for children who wait at the business with their families.

There are books in English, Arabic, Spanish and Mandarin, placed low so children can wander up to them. Children no longer play in the parking lot or run around inside, Ms. Guevara said. Instead, they read on rugs and chairs. The local librarian drops in for story time.

“I set it up as a classroom library,” Ms. Guevara, a former teacher, said. “The laundromat is really a hub for the community.”

Libraries Without Borders is part of the Laundry Literacy Coalition, a national program to promote childhood literacy in laundromats. Its pilot program in 2018 in the Bronx, Queens and Brooklyn found that when given easy access to books, children were more likely to read than to color or to play with magnetic letters and blocks. The coalition’s goal is to create reading spaces in 30,000 coin laundries.

“We have a captive audience,” said Omar Laurencin, the owner of Coinless Laundry in Detroit, for which the coalition has helped to provide desks, chairs and interlocking foam floor mats where children relax and read.

“In the past, kids would be running back and forth,” he said, but now “they literally go in the back and disappear. They are quiet.”

At City Cuts in Kutztown, Pa., the owner, Jonathan Escueta, offers a $3 incentive to children who read aloud while their hair is being cut.

He said the idea emerged from his work as a basketball coach in 2015, when he noticed that some boys lacked communication skills when instructing their team on game plans. He suspected that children needed help in using their voices constructively, and that reading aloud from an early age could impart confidence.

At first, Mr. Escueta sold chocolates to raise money for books and to pay young readers in his barbershop. Then residents helped with donations and fund-raisers. Now, children’s books are piled into crates in his shop, where Mr. Escueta live-streams his daily business of books, buzz cuts and fades.

He also has an Instagram page that sometimes features the children and their books. They often start reading in whispers, urged on by the barbers, who pretend they can’t hear or who ask them about illustrations or characters.

“The next time forward, they are going to read a little louder,” Mr. Escueta said. “They open up a little bit.”

Alexis Eisenhart said her son Jack had been reading out loud there since 2016, when he was in first grade. The gentle encouragement of the barbers has helped ensure that reading is no longer a struggle.

“Reading out loud for Jack is what has made his progress come about,” she said. “He is the first one to raise his hand in class. He is over that fear of messing up and not knowing the words.”

Wayne Hopkins said he had noticed a similar transformation in his niece’s son, Connor, who has been reading out loud during trims for more than a year. Connor, 6, recently prepared for a visit to City Cuts by bringing a book from home: “I Love You as Big as the World” by David Van Buren.

“It was a book that he knew he was going to know the words,” Mr. Hopkins said. “It was more or less him having a proud moment in that public venue. He couldn’t wait to get there.”