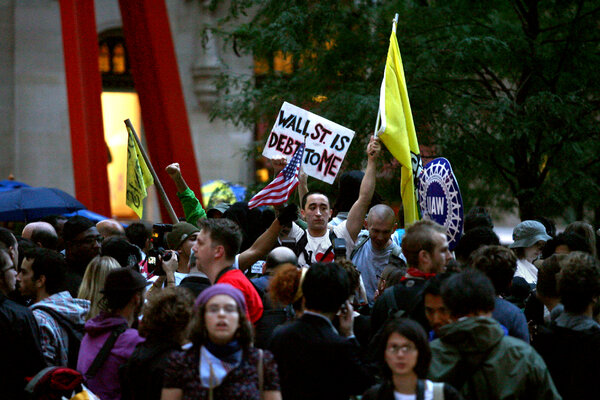 Ten years ago this month, the story goes, a few dozen activists squatted in Zuccotti Park, near Wall Street. Three years had passed since Barack Obama declared “the audacity of hope”; now came the autumn of despair, fury and hand-painted placards. (“THIS IS THE 1ST TIME I’VE FELT HOPEFUL IN A VERY LONG TIME.” “Am I dressed too nice so the media doesn’t interview me?” “TEAR DOWN WALL STREET GREED BEFORE IT TEARS DOWN THE WORLD.” “I’LL BELIEVE CORPORATIONS ARE PEOPLE WHEN TEXAS EXECUTES ONE.” “SCREW US AND WE MULTIPLY.”) They set up tents, and a kitchen, and Wi-Fi for blogging and livestreaming, and congregated for meetings wherein anyone could speak up and the crowd would repeat, phrase by phrase, what the speaker said (they called this the human mic) and, to signal agreement, wiggled their fingers instead of applauding.

A week into the occupation, cellphone cameras captured the spectacle of a police officer spraying pepper spray directly into the eyes of unarmed women; the images went, as they say, viral, and the population of Zuccotti Park (now dubbed Liberty Square) promptly doubled. The following week, more than 700 were arrested after blocking traffic on the Brooklyn Bridge.

Journalists flocked (and some clucked), unions supplied tents (but quietly so), and old-style radicals tore what remained of their hair because the occupiers disdained leadership, clear strategy or structure. Hundreds of replicas sprouted across the country. These activists were “horizontalist.” They disdained the idea of making specific demands, or rather they proliferated them (including “Tax Wall Street Transactions” and “Bring Back Glass-Steagall,” referring to the 1933 law that had separated commercial from investment banking, only to be repealed in 1999 in a measure long sought by bankers and signed into law by President Bill Clinton).

Mayors and police chiefs, aghast, tried to figure out what to do with this new style of disorder. Two months after the first encampment, New York and other cities sent in the cops, tore down the tents, dispersed the occupiers and left them with memories and dreams. End story.

But not so fast. “This is the beginning of the beginning,” read one sign at Zuccotti Park. Put pithily, that is the journalist Michael Levitin’s argument. He heard about the encampment on his car radio, checked out the park, was impressed by the “intensity on the young faces,” returned with his sleeping bag, rolled it out onto cardboard, shivered in the rain, joined in the chaos and the festivity, got “caught in the madness.” Now, in a fluidly written, sometimes lyrical account, quoting many activists to convey the spirit of the enterprise, he argues that far from disappearing, the Occupy encampments sent out ripples that turned into cascades that transformed the American political landscape. Or to use an organizer’s different metaphor, “Occupy was like a sandbox for testing” an “activist toolbox.”

Perhaps 300,000 people became involved with the movement at its height. “It was in the air almost,” an organizer of Washington, D.C., Occupy said. Then it was more than almost. The impacts reverberated through the culture. “We are the 99 percent!” was an ingenious chant, Occupy having adopted Joseph Stiglitz’s arithmetic division of the world; “the 1 percent” — such a puny number of the undeserving ultrarich — largely absorbed earlier generations’ animus toward the Ruling Class, the Power Elite, the Establishment. Who wouldn’t be tempted to join a grand supermajority?

Over the next years, waves of activists discovered, or rediscovered, a taste for civil disobedience and other direct actions. Occupy activists went to the aid of victims of Hurricane Sandy; helped block the Keystone XL pipeline; joined the Lakota Sioux to resist another oil pipeline at Standing Rock; and threw themselves into all manner of climate-change campaigns. Horizontalism proved to be more than a fringe taste, as Occupy veterans joined union organizers in a “Fight for $15” campaign that swept the fast-food industry and inspired minimum wage referendums and laws throughout the country, even in red states.

Whereas the Tea Party movement of 2009-10, lubricated by big money from the Koch brothers and others, took over the Republican Party, Occupy disdained establishment politics. “At its core,” Levitin writes, “it was a movement constrained by its own contradictions: filled with leaders who declared themselves leaderless, governed by a consensus-based structure that failed to reach consensus, seeking to transform politics while refusing to become political.” It was, Levitin concludes, “colorful and chaotic, inspiring and self-defeating.”

But whatever its early animus toward electoral politics, Occupy — and its fellow travelers — set off a convulsion in the Democratic Party that brought President Obama to call inequality “the defining issue of our time.” It gave Elizabeth Warren a platform for her egalitarian reforms and, most consequentially, ushered in Bernie Sanders’s campaigns for the Democratic presidential nomination in 2016 and 2020, moving the party’s center leftward and exerting pressure on the putatively moderate nominee Joe Biden. (In the cheeky but accurate words of Felicia Wong, president and chief executive of the progressive Roosevelt Institute, Biden turned out to be “so old … he’s actually pre-neoliberal.”)

“Sanders crystallized the intangible demands that Occupy had put forward but failed to structure in the litany of accusations against the 1 percent,” Levitin writes. For example, Occupy’s Strike Debt spinoff became the template for Sanders’s 2017 proposal to make public universities free, which in turn evolved into Biden’s more modest but still significant proposal for community colleges.

Levitin’s enthusiasm is infectious, if at times extravagant. Like many journalists on the left, he suggests that Democratic progressives were the big winners in the two recent congressional general elections, whereas the consensus among analysts and academics is that in 2018 moderates did better than progressives in swing districts. (Of course, it’s also true that those moderates were more progressive than the moderates who won earlier elections.) He probably exaggerates Occupy’s impact on the Women’s March of 2017, on the #MeToo movement and Black Lives Matter in 2020, though the precedent of getting lots of people into the streets surely stirred the imagination of many post-2011 activists who would not rush to sleep in parks. He credits the Spanish Podemos party, a derivative of Madrid’s 2011 Indignados movement (which predated Occupy Wall Street by several months), with more political impact than it had, and slides over its authoritarian tendencies with an easy phrase: “missteps and intraparty conflicts.” However radical, policy programs like the Green New Deal will not, as he claims, “drive free-market capitalism out of business.”

As for the future? To steal a phrase from the comedian Mort Sahl, it lies ahead. Anyone looking for assurances of where our national upheavals are heading will need a clearer crystal ball than mine. But it is no exaggeration to say that Occupy Wall Street and its offshoots changed a good deal more of the landscape than Zuccotti Park’s three-quarters of an acre in New York’s financial district.