What’s Fauci Reading? We Take Another Look at Celebrity Bookshelves

As 2020 winds down and we look back at our pandemic year, it’s possible, through the murk of loneliness and illness, to see the few bright spots that existed for people who love books. We had the chance to peruse a lot of strangers’ bookshelves — nearly every time we turned on the television or began a video call.

And peruse we did and did again. Given how much rare joy and strange insight our sleuthing provided, we couldn’t let this momentous year end without another go. 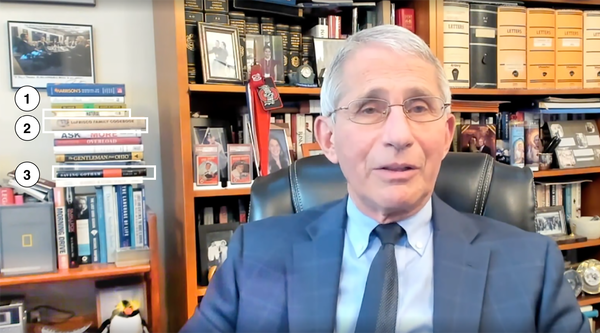 1. “Natural,” by Alan Levinovitz: Scientists are always on the lookout for snake-oil salesmen (whether they be hawking a miracle diet or, say, hydroxychloroquine). Here Levinovitz investigates the hucksterism, misuse and even harmfulness surrounding our obsession with all things organic, and the assumption that just because something is “all natural” it’s good for you.

2. “The LoFrisco Family Cookbook,” by Anthony F. LoFrisco: All the Sicilian spaghetti and linguine recipes a scientist in quarantine could want! This book, by a son of Sicilian immigrants, describes how his family recreated their traditional dishes in Brooklyn. It would definitely be a treat for Fauci, whose paternal grandparents hailed from Sciacca, Sicily.

1. “Warnings,” by Richard A. Clarke and R.P. Eddy: These two veterans of the White House National Security Council tried to offer, in this 2017 book, a way to anticipate the unexpected calamities that seem to come from nowhere but have huge repercussions — like, yes, pandemics.

2. “Decent Interval,” by Frank Snepp: This 1977 account by a C.I.A. intelligence analyst focuses on the United States’s chaotic withdrawal from Saigon. It is essentially the story of a foreign policy disaster: the poorly executed exit from a war that had gone on too long.

3. “Spycatcher,” by Peter Wright: Another intelligence officer’s account, this one from the former assistant director of MI5. It is full of untold Cold War stories — assassination plots, eavesdropping schemes and the like. Publication of the book was initially banned in England.

1. “The Flight Portfolio,” by Julie Orringer: This novel imagines the life of Varian Fry, the American journalist who in 1940 helped a trove of famous and endangered artists and thinkers, like Hannah Arendt and Marc Chagall, escape the continent. Louis-Dreyfus herself comes from a French Jewish family who played a part in the resistance to the Nazi occupation.

2. “Born a Crime,” by Trevor Noah: The host of “The Daily Show” tells the story of growing up mixed-race in apartheid South Africa. The stories are funny, as befitting a comedian, but often moving, particularly Noah’s portrait of his mother, whose intense love and fearlessness shaped his life.

3. “The New Complete Dog Book”: This reference book, produced by the American Kennel Club, has been the premier guide to purebred dogs for most of the last 100 years. Our research tells us Louis-Dreyfus has had a black Labradoodle named Buttercup. Not exactly purebred, but still.

1. “Grit, Noise and Revolution,” by David A. Carson: When it comes to music, Detroit is mostly remembered for Motown, but there was a whole generation of rock that followed in the 1960s and ’70s. Carson has this Motor City story, focusing on musicians and bands like the MC5, Iggy and the Stooges and Ted Nugent.

2. “Once Upon a Car,” by Bill Vlasic: The bookshelf of a Michigan governor would not be complete without a tome about cars, and this one by Vlasic, the Times’s Detroit bureau chief, is worthy. He describes the rise, fall and rebirth of the Big Three U.S. automakers, General Motors, Ford and Chrysler.

3. “Ice Hunter,” by Joseph Heywood: Even Whitmer’s noir is from Michigan. This one is from a series starring Grady Service, a conservation officer in the farthest reaches of Michigan’s Upper Peninsula. Here Service takes on a family of poachers up to no good.

1. “Trust Exercise,” by Susan Choi: This National Book Award winner is a novel about drama geeks in the 1980s enthralled by a charismatic teacher at their high school. To quote our book critic Dwight Garner, “It’s about misplaced trust in adults, and about female friendships gone dangerously awry. In the end, it’s about cruelty.”

2. “Ali: A Life,” by Jonathan Eig: This 2017 biography of the greatest is starting to seem fairly definitive. It reminds us of Ali’s own words: “I am America. I am the part you won’t recognize. But get used to me — Black, confident, cocky; my name, not yours; my religion, not yours; my goals, my own. Get used to me.”

3. “Gunslinger,” by Jeff Pearlman: Brett Favre’s life is worthy of a meaty biography, and here he gets one. Pearlman tells the story of his rise from a rough rural childhood to his part in returning the Green Bay Packers to greatness, and the addictions and other crises that nearly sidelined him along the way.

1. “Purity,” by Jonathan Franzen: In this sprawling 2015 novel, Franzen goes to Bolivia, East Germany and many places in between to tell the tale of a young woman searching for her origins and an identity of her own.

2. “Malcolm X,” by Manning Marable: This Pulitzer Prize-winning biography recounts the fascinating life of Malcolm X with thoroughness and breadth — not an easy feat set given the benchmark set by Alex Haley. But Marable tries to unpack truth from myth.

1. “Undisputed Truth,” by Mike Tyson and Larry Sloman: Rosie likes boxing! And there is no more complicated figure in the last few decades of the sport than Tyson, reckless and brilliant in equal measure. He tells of his hardscrabble Brooklyn youth, how he was bullied and how he turned himself into a champion — then fell and got up again. On repeat.

2. “In This Corner … !,” by Peter Heller: An extraordinary oral history of the sport that covers many of the greats, from Jake LaMotta and Jack Dempsey to Sugar Ray Robinson and Rocky Graziano. There are 42 boxers in all, describing the fights of their lives.

3. “The Bite Fight,” by George Willis: Back to Tyson, this time to his infamous fight on June 28, 1997, when he bit off a chunk of Evander Holyfield’s ear. Willis’s obsessive account, for which he interviewed nearly 100 people, described not just what happened but how it altered the course of the boxers’ careers.

1. “Guns, Germs, and Steel,” by Jared Diamond: For the man who owns the Everything Store, here is a theory of everything. Diamond’s book is an argument about how geographical and environmental factors shaped the modern world and helped determine which directions different human societies would take.

2. “Sapiens” and “Homo Deus,” by Yuval Noah Harari: Bezos has the double whammy of Harari’s two big books, both drawing on the worlds of biology, anthropology, paleontology and economics. The first, “Sapiens,” put forth a theory about how our species won out over other humans, and the second, “Homo Deus,” was about the future and what our next evolutionary steps might be.