With His New Mystery Novel, John Banville Kills Off a Pen Name

The Irish novelist John Banville is a famous perfectionist — the kind of writer who can spend a day on a single sentence. His books, most written in the first person, are lapidary, intricate, Nabokovian. Or just difficult, some readers have complained, more interested in style than in storytelling. They invariably come laden with words that seem meant to prove his vocabulary is bigger than yours: flocculent, crapulent, caducous, anaglypta, mephitic, velutinous.

A Banville novel typically takes four or five painful years to complete, after which the author is still dissatisfied. In a 2009 interview, he told The Paris Review that he hated his own books. “They’re an embarrassment and a deep source of shame,” he said, and then added: “They’re better than everybody else’s, of course, but not good enough for me.”

In March 2005, however, while staying at a friend’s house in Italy, Banville sat down one morning and for some reason began writing a mystery novel set in 1950s Dublin. By lunchtime he had 1,500 words — or a week’s worth at his usual pace. He thought to himself, “John Banville, you slut,” but kept going and finished in five or six months. “I was a little appalled at the speed with which I got the thing done,” he said in a recent email. He had been reading Simenon — though not the Inspector Maigret crime novels — and was inspired by him to see what could be accomplished with a narrow vocabulary and a spare, straightforward style.

That novel, “Christine Falls” — about a heavy-drinking doctor named Quirke, whose job as the pathologist in the Dublin coroner’s office puts him in the vicinity of a lot of corpses — was published in 2007 under the name Benjamin Black. The pseudonym wasn’t really a disguise — booksellers and reviewers were in on it from the beginning — but, rather, a way of indicating that John Banville had a dark other half who was up to something different.

“As Black, I was determined to write with as plain a style as possible,” he said. “Banville now and then would try to compel him to slow down and savor the sentences, and this was something he had to be on guard against. I always say that what you get from Black is the result of spontaneity, whereas in Banville it’s an extreme of concentration.”

Banville expected to write just one Quirke novel, but six more followed, along with four Black books that were not about Quirke, including a Raymond Chandler imitation and a novel that imagines the two British princesses Elizabeth and Margaret sequestered in Ireland during World War II. These books haven’t made him rich, or as rich as Banville hoped, but they have won for him a brand-new audience. The Black books are everything the Banville ones are not — crisp, tightly plotted, propelled by dialogue — and some faithless readers have even confessed they now prefer them.

Meanwhile, Banville, plodding along in his usual way, writing in longhand in beautifully bound notebooks (unlike Black, who uses a computer), managed to finish four books of his own since Black came along. The most recent of them, “Mrs. Osmond” (2017), is a sequel to Henry James’s “The Portrait of a Lady,” written in a pitch-perfect imitation of James’s style. That one came a little easier than most, Mr. Banville said. “To my surprise, I found I had HJ’s ‘voice,’ or something somewhat like it, from the start.” There were days when he would go out for a walk only to come back and feel as if another couple of pages had been written in his absence. “So detached was I that I would lean back now and then and watch my fountain pen tracing out the lines,” he said. “An odd sensation.”

Banville’s newest novel, “Snow,” is another mystery, also set in Ireland in the ’50s, though instead of Quirke it features a new detective, St. John (pronounced the aristocratic way: “sinjun”) Strafford, a young man from the Protestant land-owning class. It came out two years ago in Spain, where Benjamin Black is unusually popular — for reasons Banville thinks may have to do with some of Spain and Ireland’s shared history in the 20th century: civil war, the hegemony of the church and a darkness at the heart of the national character.

When “Snow” comes out here next month, though, the cover will say John Banville, not Benjamin Black, in very large letters. Black, Banville said recently, has very graciously allowed himself to be killed off — though he will have to live on in Spain, posing a puzzle to reviewers and bibliographers, because there he’s too big to die.

What happened, Banville says, is that in rereading some of the Black books, he decided they were better than he remembered. “I was surprised and highly gratified to discover that they weren’t bad at all, and in fact might even be quite good,” he explained. “You must understand, I’m one of those writers who dislikes and is shamed by his own work. I am in pursuit of perfection and, as we know, perfection is far beyond the reach of our puny powers. But when I found that I liked the Blacks, I said to myself, ‘Why do I need this rascal anyway?’ So I shut him in a room with a pistol, a phial of sleeping pills and a bottle of Scotch, and that was the end of him. I’ve never been ashamed or felt I had to defend what Black wrote. His books are works of craftsmanship written honestly and without pretension.” He added, with characteristic slyness: “Not that I think pretension necessarily a bad thing in a writer.”

Banville, who is 74, grew up in County Wexford, which he thought boring and provincial. As a boy, he loved visiting an aunt in Dublin, which seemed much more vivid and exciting, and some of that romance lingers on in the Quirke books, in which the city itself — its sights and smells, its atmosphere of secrecy and repression, especially where matters of sex are concerned — is practically a character. He didn’t have to research much, he explained. Most of the details came welling up in his memory.

Banville says he remains fascinated by Ireland in the ’50s — by the way “church and state worked to keep the people safely infantilized, the church through early brainwashing, the state by blanket censorship and official lying.” “Snow,” which is set at a Protestant-owned country estate where a Catholic priest is murdered in embarrassing circumstances, adds to that atmosphere what Banville calls a “peasant’s fascination with the Anglo-Irish as aristocratic class — indeed, as a caste.” He remembers, as a boy, attending a yearly fete held by some local Protestants, with their shabby-genteel tweeds and cut-glass accents. “It was like wandering around in Wonderland,” he said. 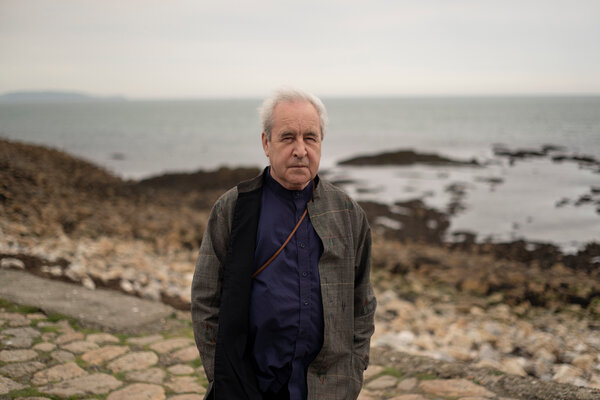 In actuality, it would have been highly unlikely for someone like St. John Strafford to wind up on the Irish police force. So he’s a fantasy figure of sorts, but an appealing one, whose very outsiderness enables him to notice things others miss. Banville has already finished a second novel about him, due out next year, and at the end of it, he says, is a “heavy hint that Strafford will become involved with the Quirke clan.” Fans of the series might hope this means that he falls for Quirke’s daughter, Phoebe. They’re both lonely, and could use each other.

Banville used to have a reputation for occasional testiness and arrogance. When his novel “The Sea” was a surprise winner of the Man Booker Prize in 2005, he offended some people by remarking that it was “nice to see a work of art” come out on top. But in an early September Zoom session — a glass of red wine in hand, an unmade bed in the background —he was wry, self-deprecatory and even a little nostalgic. He said he’s waiting out the pandemic in a house overlooking the harbor in a fishing village north of Dublin. The view is almost overwhelming: When he’s working, he’d rather look at the wall. “But there are worse places I could be, and worse predicaments,” he said. “And as a writer, haven’t I been in isolation the last 60 years anyway?”

Normally, the summertime, which he hates, is when he works on a Black book. “So I can tell my family and friends, ‘Sorry, I can’t see you — I’m busy.’” But this summer he was working instead on what he thinks might be the last of the traditional Banville books, one he began in 2017. In a great feat of Banvillean self-reference and summing up — the kind of thing that drives his critics crazy — this book brings back Freddie Montgomery, the narrator of his 1989 novel, “The Book of Evidence” (he also figures in two sequels, “Ghosts” and “Athena”), and inserts him into the world of Banville’s 2009 book, “The Infinities,” set in a sort of alternate universe, one of many, where England is still Catholic, energy is derived from saltwater, and the Greek gods are real and mingle with humans. Banville said he’s determined to finish by Christmas, and added — quoting Oscar Wilde’s famous line about the wallpaper in the Paris hotel room where he was dying — “One or the other of us will have to go.”

George Clooney & Rande Gerber Sent the Casamigos Halloween Truck Around L.A. & Lots of Stars Got In!

Elvis Costello Teams Up With Jon Batiste On ‘Colbert’
We and our partners use cookies on this site to improve our service, perform analytics, personalize advertising, measure advertising performance, and remember website preferences.Ok